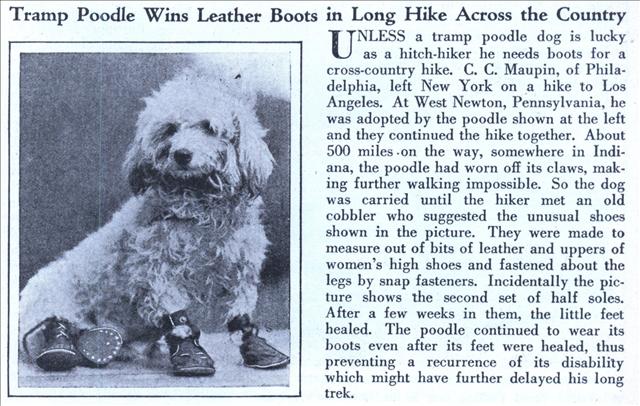 UNLESS a tramp poodle dog is lucky as a hitch-hiker he needs boots for a cross-country hike. C. C. Maupin, of Philadelphia, left New York on a hike to Los Angeles. At West Newton, Pennsylvania, he was adopted by the poodle shown at the left and they continued the hike together. About 500 miles on the way, somewhere in Indiana, the poodle had worn off its claws, making further walking impossible. So the dog was carried until the hiker met an old cobbler who suggested the unusual shoes shown in the picture. They were made to measure out of bits of leather and uppers of women’s high shoes and fastened about the legs by snap fasteners. Incidentally the picture shows the second set of half soles. After a few weeks in them, the little feet healed. The poodle continued to wear its boots even after its feet were healed, thus preventing a recurrence of its disability which might have further delayed his long trek.