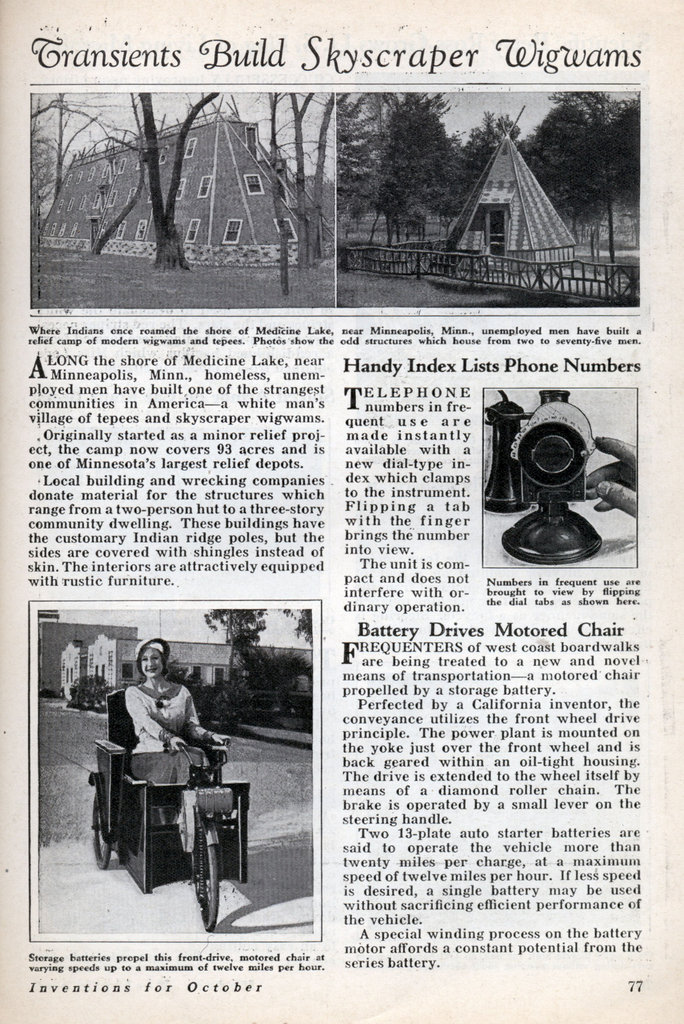 Transients Build Skyscraper Wigwams
ALONG the shore of Medicine Lake, near Minneapolis, Minn., homeless, unemployed men have built one of the strangest communities in Americaâ€”a white man’s village of tepees and skyscraper wigwams.

Originally started as a minor relief project, the camp now covers 93 acres and is one of Minnesota’s largest relief depots.

Local building and wrecking companies. donate material for the structures which range from a two-person hut to a three-story community dwelling. These buildings have the customary Indian ridge poles, but the sides are covered with shingles instead of skin. The interiors are attractively equipped with rustic furniture.

TELEPHONE numbers in frequent use are made instantly available with a new dial-type index which clamps to the instrument. Flipping a tab with the finger brings the number into view.The unit is compact and does not interfere with ordinary operation.

FREQUENTERS of west coast boardwalks are being treated to a new and novel means of transportationâ€”a motored chair propelled by a storage battery.
Perfected by a California inventor, the conveyance utilizes the front wheel drive principle. The power plant is mounted on the yoke just over the front wheel and is back geared within an oil-tight housing. The drive is extended to the wheel itself by means of a diamond roller chain. The brake is operated by a small lever on the steering handle.

Two 13-plate auto starter batteries are said to operate the vehicle more than twenty miles per charge, at a maximum speed of twelve miles per hour. If less speed is desired, a single battery may be used without sacrificing efficient performance of
the vehicle.

A special winding process on the battery motor affords a constant potential from the series battery.