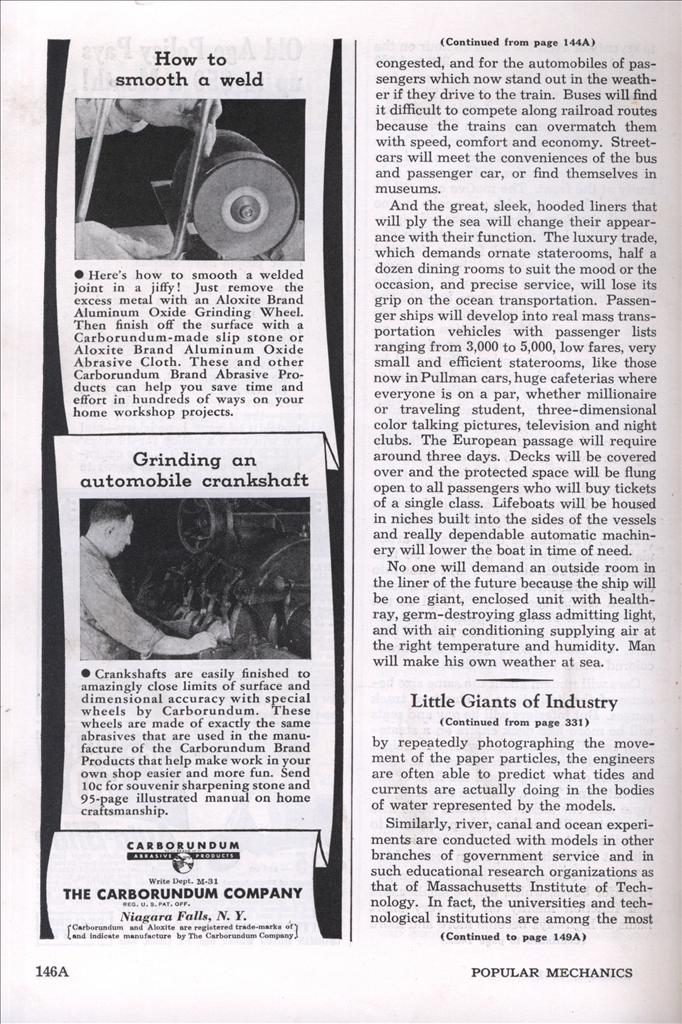 CIVILIZATION has stood aghast at the role the airplane has played in altering the map of the world and changing the skylines of bombed cities scattered all the way from Europe to the Orient.

Before many years, when the world has had a chance to bind its war wounds and turn its attention to the improvement of what is left of civilization, the impact of the airplane on other forms of transportation is likely to be as awe-inspiring as those first mass-bombing attacks on the great city of London.

In fact, there is plenty of rational evidence that the railroad train, the ocean liner, the motorbus and the streetcar will be quite different from the mass transportation vehicles we now see on land, in water and in air. Modern industrial design is very strongly functional. And as each of these vehicles is forced to change its purposes by pressure of competition from the airplane, it will change its form.

The airplane of the future, on the other hand, is very likely to retain its general lines as we know them, because, as the submarine is shaped somewhat like a fish, the plane is a rough copy of one of nature’s most efficient inventions, the bird.

The long-distance air liners of the future, however, will be veritable flying hotels, so great that one of them could enfold the army’s new 164,000-pound bomber under a wing like a hen nestling a chick. Only the power problemâ€”the ratio between weight and the propulsion output of the relatively inefficient gasoline and Diesel motorâ€”limits the size of aircraft today.

During the various stages of progress the motive power of the plane may be the turbine using steam or mercury vapor or the rocketlike blast of exploding vapor created by the combinations of yet undiscovered chemicals. These power devices are probably destined to prove makeshifts, however, and the plane of the future is likely to be propelled by one, or all of three scientifically feasible methods.

One may be the sunplane, the most notable feature of which will be its enormously widespread wings, the surface of which will be treated so as to capture the power of the sun’s rays and turn this energy into enough force to lift and drive the craft. These will need auxiliary power for cloudy days unless a new method of storing energy is discovered. Scientists of today are already moving little machines with this same sun power, so the sunplane is not at all unlikely to develop.

The second will possibly be the beam- plane which will take its power from radio stations, just as airplanes of today are taking directional signals on beams from airport radio stations. Research engineers are already broadcasting power through the air and are lighting lamp bulbs with this unhooked energy. You may be able to get into your plane in Chicago, tune in for New York and “click” off you go.

The third likelihood is the magnetic plane which will sustain its flight by establishing its Own magnetic field of sufficient strength to overcome the force of gravity and which will be propelled by the counter forces of attraction from one magnetic current to another, much as the glider of today uses air currents. Ships plying the ocean right now are setting up their own magnetic fields to offset the fatal attraction they hold for magnetic mines.

Whether turbine, rocket, sunplane, beamplane or magnetic plane, all of them are almost certain to take advantage of the greatest moving force that exists in our nook of the universeâ€”the revolving action of the earth itself. It is pretty safe to predict that airplanes of the future will rise so high in the stratosphere that they will be able to overcome gravity and stand still in the great silent reaches of the sky and let the ground far below them fly past at a rate of more than one thousand miles an hour. Just as the utter necessity for streamlining airplanes has already taught the builders of railroad equipment, ships, motorbuses, streetcars and automobiles the advantages of cutting air resistance and thus changed the shape of these vehicles in the past ten years, so will the giants of the air keep forcing more changes.

Flying freight trains of five and six planes of the autogiro or helicopter type operated by automatic multiple controls are likely to be hauling lighter products, materials, packages and mail through the air in great quantities. A case of ripe oranges ordered by a St. Louis merchant in Florida in the morning can be picked, packed, shipped and received in far-off Missouri the same day by airplane freight, at costs kept down by the same economical methods now used in hauling long strings of railroad express and freight cars. Very heavy and bulky freight probably will stay with railroads. Glider planes are already being towed by bombers in Europe. Other planes are carrying small tanks and boats suspended beneath their fuselages.

Since it is the habit of man to build his large cities near a body of water only the inevitable increase in air traffic is needed to make seaplane bases as common as bus terminals and railroad stations throughout America. Into those bases on the waterfront close to business districts, small seaplanes will take passengers and packages to and from outlying airports. Helicopters and autogiros will land airplane passengers on roof and pocket-handkerchief fields in parks and on modern housing developments. One new apartment house group in New York City has its autogiro field as a convenience to future tenants.

And what will all this do to the railroads?

Well, first, the railroads will drop most of the long-haul passenger trains. Who will want to travel long distances at sixty to seventy or even 100 miles an hour on the ground when they can go from 300 to 1,000 miles an hour in the airâ€”except some of us old-fashioned people of 1941? The railroads will carry most of their traffic on short quick jumps, say, from Cleveland to Toledo or Baltimore to Richmond. Trains will be limited to about five cars and you will find no locomotive puffing away gallantly at the front. The motive car will be placed in the center with a pancake engine beneath the floor. The engineer will operate his Diesel-electric or gas-turbine engine by remote control from a forward compartment, surrounded by passenger seats. At the end of the run, he will take his control handle and move back to the other end and the train will soon glide back in the opposite direction with no wasteful or laborious switching of engines from one end to the other. Runs will be frequent. This is foreshadowed by double-end rail cars already in operation.

The sleeping car will gradually vanish from the scheme of things, because of short runs, and the companies now manufacturing them will go into the entertainment and luxury field with television cars, game cars, buffet luncheon cars, and other cars which will attract the passengers’ dollars by making the short trip a pleasant one.

Trains will become distinguished articulated units, sparkling with color so that the “rainbow railroad yard” will come into existence with lines of smooth, short, varicolored trains, each as individual as the run it makes. As the reciprocal steam engine and coal vanish from the railroad picture, the smoke, soot, grime and drab-colored trains will go with them.

Cars will remain about the same size because of the limitations of standard track gauges. But interiors will be gay and seats will be more like deck chairs on a steamship, reclining if desired, with the weight of the body balanced according to the distribution of its weight and the flow of the bloodstream. This will lessen traveling fatigue and car sickness. Radios built into the seats will enable each passenger to hear the spot news and get entertainment without disturbing the person next to him.

Railroad stations will include huge garages for buses, which will be smaller and will function mainly on the very short hauls as highways become more and more congested, and for the automobiles of passengers which now stand out in the weather if they drive to the train. Buses will find it difficult to compete along railroad routes because the trains can overmatch them with speed, comfort and economy. Streetcars will meet the conveniences of the bus and passenger car, or find themselves in museums.

And the great, sleek, hooded liners that will ply the sea will change their appearance with their function. The luxury trade, which demands ornate staterooms, half a dozen dining rooms to suit the mood or the occasion, and precise service, will lose its grip on the ocean transportation. Passenger ships will develop into real mass transportation vehicles with passenger lists ranging from 3,000 to 5,000, low fares, very small and efficient staterooms, like those now in Pullman cars, huge cafeterias where everyone is on a par, whether millionaire or traveling student, three-dimensional color talking pictures, television and night clubs. The European passage will require around three days. Decks will be covered over and the protected space will be flung open to all passengers who will buy tickets of a single class. Lifeboats will be housed in niches built into the sides of the vessels and really dependable automatic machinery will lower the boat in time of need.

No one will demand an outside room in the liner of the future because the ship will be one giant, enclosed unit with health-ray, germ-destroying glass admitting light, and with air conditioning supplying air at the right temperature and humidity. Man will make his own weather at sea.