Trapped Rat Shoots Self and Photographs the Fatal Event (Jan, 1935)

This just seems really sadistic to me. Why would you want this picture? 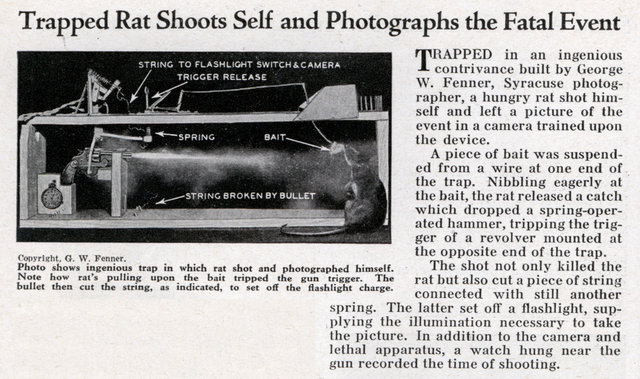 Trapped Rat Shoots Self and Photographs the Fatal Event
TRAPPED in an ingenious contrivance built by George W. Fenner, Syracuse photographer, a hungry rat shot himself and left a picture of the event in a camera trained upon the device.

A piece of bait was suspended from a wire at one end of the trap. Nibbling eagerly at the bait, the rat released a catch which dropped a spring-operated hammer, tripping the trigger of a revolver mounted at the opposite end of the trap.
The shot not only killed the rat but also cut a piece of string connected with still another spring. The latter set off a flashlight, supplying the illumination necessary to take the picture. In addition to the camera and lethal apparatus, a watch hung near the gun recorded the time of shooting.