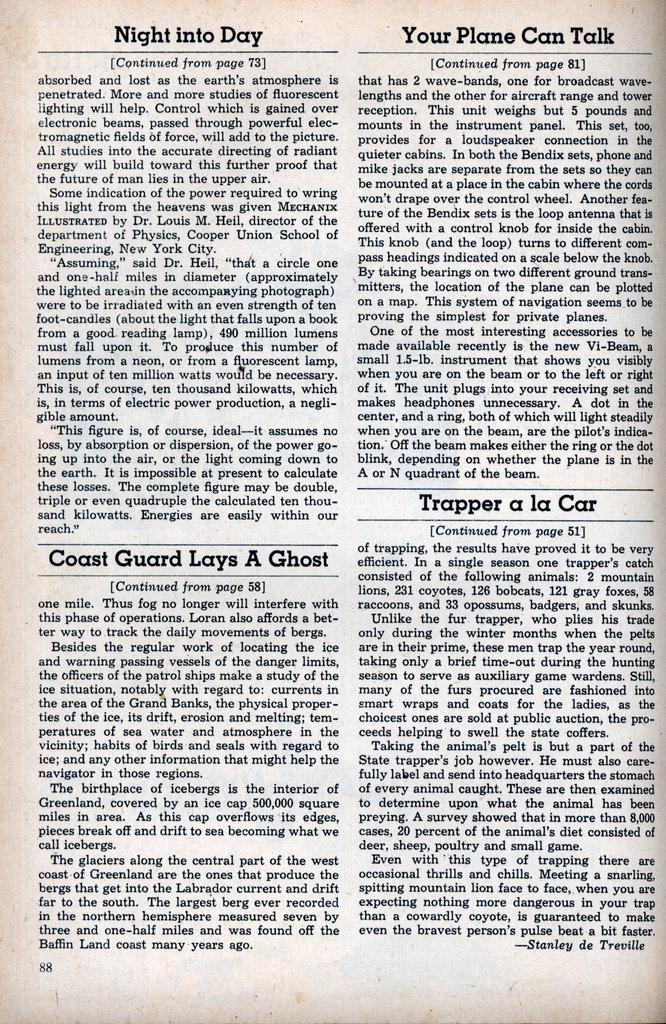 These professional trappers of predatory animals cover their trap-lines via automobiles.

TO MANY, the name “trapper” conjures up a picture of a romantic figure, clad in a heavy mackinaw and fur cap, living in an isolated cabin near Hudson Bay, tramping over miles of trap-line on snowshoes, and making only rare trips to civilization by means of his dog sledge. This is Jack London’s or James Oliver Cur-wood’s trapper.

There is a different type of trapper, however, and though less romantic the work he does is more useful than merely covering milady’s curves with ermine or sables. He is the “California State Trapper,” whose job it is to control the predatory animals in the game refuges, and to set; that (he ranchers of the state can raise poultry and livestock without having all of their future steaks, chops and fryers disappear down the gullets of hungry bobcats or coyotes.

These fellows, instead of mushing great distances over crunching snow to inspect their trap-lines, leave their homes in the city about the same time that you and I go to work. They sit back in the comparative luxury of a light delivery truck, arid bounce and wind their way over the narrow by-roads that crisscross California’s sagebrush covered hills. Most of their traps are set within 20 or 30 feet of the road, so that little time is lost in seeing if a catch has been made. Although this appears to be a leisurely way of trapping, the results have proved it to be very efficient. In a single season one trapper’s catch consisted of the following animals: 2 mountain lions, 231 coyotes, 126 bobcats, 121 gray foxes, 58 raccoons, and 33 opossums, badgers, and skunks.

Unlike the fur trapper, who plies his trade only during the winter months when the pelts are in their prime, these men trap the year round, taking only a brief time-out during the hunting season to serve as auxiliary game wardens. Still, many of the furs procured are fashioned into smart wraps and coats for the ladies, as the choicest ones are sold at public auction, the proceeds helping to swell the state coffers.

Taking the animal’s pelt is but a part of the State trapper’s job however. He must also carefully label and send into headquarters the stomach of every animal caught. These are then examined to determine upon what the animal has been preying. A survey showed that in more than 8,000 cases, 20 percent of the animal’s diet consisted of deer, sheep, poultry and small game.

Even with ‘ this type of trapping there are occasional thrills and chills. Meeting a snarling, spitting mountain lion face to face, when you are expecting nothing more dangerous in your trap than a cowardly coyote, is guaranteed to make even the bravest person’s pulse beat a bit faster. —Stanley de Treville