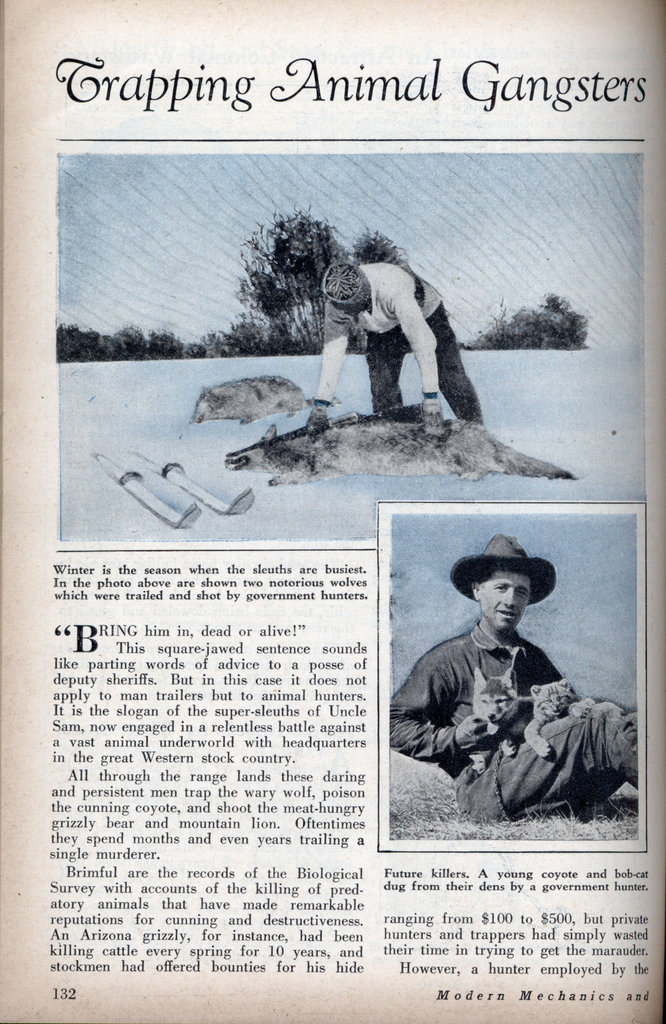 The gangster is commonly thought of as a product of modern civilization, but in reality he has existed since the world began among all forms of life. In this article you will read of how the predatory animals are preying upon their fellow creatures and encroaching upon the domain claimed by man. How the forces of the United States government work to stamp out the criminals of the animal world constitutes a story as gripping as any detective yarn.

“BRING him in, dead or alive!”

This square-jawed sentence sounds like parting words of advice to a posse of deputy sheriffs. But in this case it does not apply to man trailers but to animal hunters. It is the slogan of the super-sleuths of Uncle Sam, now engaged in a relentless battle against a vast animal underworld with headquarters in the great Western stock country.

All through the range lands these daring and persistent men trap the wary wolf, poison the cunning coyote, and shoot the meat-hungry grizzly bear and mountain lion. Oftentimes they spend months and even years trailing a single murderer.

Brimful are the records of the Biological Survey with accounts of the killing of predatory animals that have made remarkable reputations for cunning and destructiveness. An Arizona grizzly, for instance, had been killing cattle every spring for 10 years, and stockmen had offered bounties for his hide ranging from $100 to $500, but private hunters and trappers had simply wasted their time in trying to get the marauder.

However, a hunter employed by the Department of Agriculture and the State of Arizona finally got him after a thrilling hunt in which the pack of dogs was whipped and the bear stopped by a bullet when he was only 15 feet away. It is estimated that in four years this grizzly killed between $25,000 and $30,000 worth of livestock, and that in his lifetime he did no less than $75,000 worth of damage to ranchers.

Many, too, are the dramatic tales of renegade wolves and coyotes, finally outwitted after months of futile trailing. One day, not so long ago, a government hunter in the state of Washington trapped the Hanford wolf, an elusive killer that had been making depredations on livestock for more than two years, during which time it is believed that he destroyed at least $5,000 worth of stock. He was finally caught in a trap that had been concealed carefully along one of his trails. He dragged the trap and chain nearly seven miles before the hunter overtook and killed him! In bringing in these old trap-wise animals, hunters sometimes need the last ounce of patience they possess. One hunter tried for many months to catch an aged female wolf that had lost a foot in a trap and had become so cautious that every trap failed to hold her. She also refused the attraction of poisoned bait. Whereupon the hunter took his bed near a water hole along one of her trails and stayed there every night. Finally he shot the three-footed wolf within ten feet of his bed!

But perhaps the prize yarn of all concerns the famous Lobo wolf. After two years as king of the range during which he successfully matched his cunning with every artifice of ranchmen and hunter to effect his death, and cost cattlemen thousands of dollars annually in stock depredations, his reign ended abruptly a couple of years ago when M. E. Mus-grave, famous predatory animal inspector of Arizona, brought him down thirty miles east of Kingman, Ariz. The entire dramatic story is thus described by Mr. Musgrave himself:

“When I arrived at Flagstaff the latter part of August I received a letter from the Carrow Brothers Cattle Company, of Kingman, Ariz., telling me that the old wolf which had been on the range for several years was exceptionally active and was killing great numbers of calves. The Carrow Brothers raise purebred stock and, of course, the yearlings are quite valuable. I had sent two different trappers after this wolf in the past three years without success as he covered a big range and only passed over his routes about once every two weeks.

“Upon receipt of Carrow’s letter I went to Kingman by train, met Mr. Carrow on the evening of August 31 and arranged to get out to his range on the morning of September first to try and poison the wolf. Upon arrival we killed a colt, made up several hundred pork-fat poison baits and started across the range in an automobile, scattering the poison baits as we went.

“About 1:30 in the day as we drove near a big tank, Mr. Carrow said there was a coyote on the left hand side of the car. Looking up I discovered that it was not a coyote but a wolf. However, I could hardly believe that the famous old wolf would be cut on an open plain in the middle of the day. I told Mr. Carrow to drive the car in the same direction we were going, which would be passing the wolf and not driving towards him. He apparently paid little attention to the car but was walking slowly along the hillside.

“However, pretty soon I noticed that the sly old fellow was indeed watching us out of the corner of his eye. Now, we had nothing in the automobile to shoot with except a 30-30 carbine with the rear sight broken off. However, I had shot the gun several times earlier in the day and had some idea as to how to manage it, so I determined to take a chance. As the car pulled opposite the wolf I stepped out on the opposite side of the car from where he was standing, and raised my gun so there would be no apparent motion while the wolf was in sight. –

“As the gun cracked the wolf bit himself on the shoulder and I was sure I had him although it seemed too good to believe. He jumped into the air and ran at full speed, perhaps for 75 yards, when he fell dead without a struggle. When we got to him we saw at once that it was indeed the old renegade and that he had been shot once before, though not seriously.

“Needless to say, Mr. Carrow was delighted. He threw the wolf into the car and drove back to Kingman, arriving at four o’clock with the wolf. He was the largest wolf I had ever seen on the range. When we held him up his hind legs extended to the top of my hat while the nose touched the ground. He weighed 78 pounds after the skin from the shoulder to the head was removed, together with the lower part of the front legs; and about all the blood had run out of him, for I had shot him directly through the heart. He bled freely.

“This marked the end of one of the greatest cow-killers of the state of Arizona, if not the entire southwest. Mr. Carrow’s foreman actually had found 50 head of white-faced yearlings during the past year that this wolf had killed and the Carrow range is only one of several that the wily old animal had worked on.”

Winter, when the stock comes in from the summer, range, is the time selected for the strongest drive against the coyote. Then it is that the coyote hungers, and the summer pasture is free for the government hunter to work without danger to the grazing stock. There are no sheep or cattle to fall victims to the poison, no sheep dogs to eat it and crawl awayâ€”only the four-footed bandits of plain and mountain.

Fifty-thousand choice morsels of meat, cut into convenient size for gobbling up by a hungry sheep killer, each tiny morsel with its portion of poison tucked safely away inside, tasteless and effective. That is the quantity that was set one year for the state of Nevada alone. Seventy-five thousand mouthfuls of meat and poison for New Mexico. One hundred and ninety-two thousand for Arizona. Half a million for Utah! Thus is the table of the western pasture prepared for the slinking bandit who prowls and preys wherever he may, skulking by day and slaying by night the finest and choicest of the farmer’s lambs and sheep and calves.

For weeks before the actual baiting begins the stockmen are enlisted and organized and taught the part they must play in this relentless warfare against the vast animal underworld. Each community has its own leaders in the work, being mobilized efficiently preparatory to spreading the message of death against the natural enemy of the community’s economic life.

Sometimes it is necessary to train the coyote into going for his food to certain free lunch counters which later are converted into death-stands for him. In these instances, a bait free from poison, generally fresh meat. When the coyotes are accustomed to come here for their food, and the tracks in the mud or snow show that the murderers are plentiful, the approaches to the feeding station are provided with delectable sandwiches of freshly killed meat coated with poison, just the size to fit a cruel mouth and slavering jaws. These little sandwiches, cut about an inch square and from a quarter to a half inch thick, are planted in the favorite paths which the coyotes take in approaching the bait. The murderer doesn’t know he has taken poison until a sudden message from his interior department conveys the fatal tidings.

Occasionally when a stand is far up a mountainside or in the high hills where the snow comes early and stays late, or in regions which for any reason soon become inaccessible for the stockman to visit, the government hunter places a carcass of fresh meat at a strategic point for the animals, loaded with many balls of fat, sunk into the flesh and covered over.

Reports from various parts of the West show that the hunters are killing coyotes in large numbers by this method. For instance, two hunters placed a 300-mile poison line in about five weeks, using 20 horses and burros for bait. When they got back to the beginning of the poison line they found 40 dead coyotes at the first two stations, whereas stockmen all along the line told of finding up to 73 of the animal gangsters.