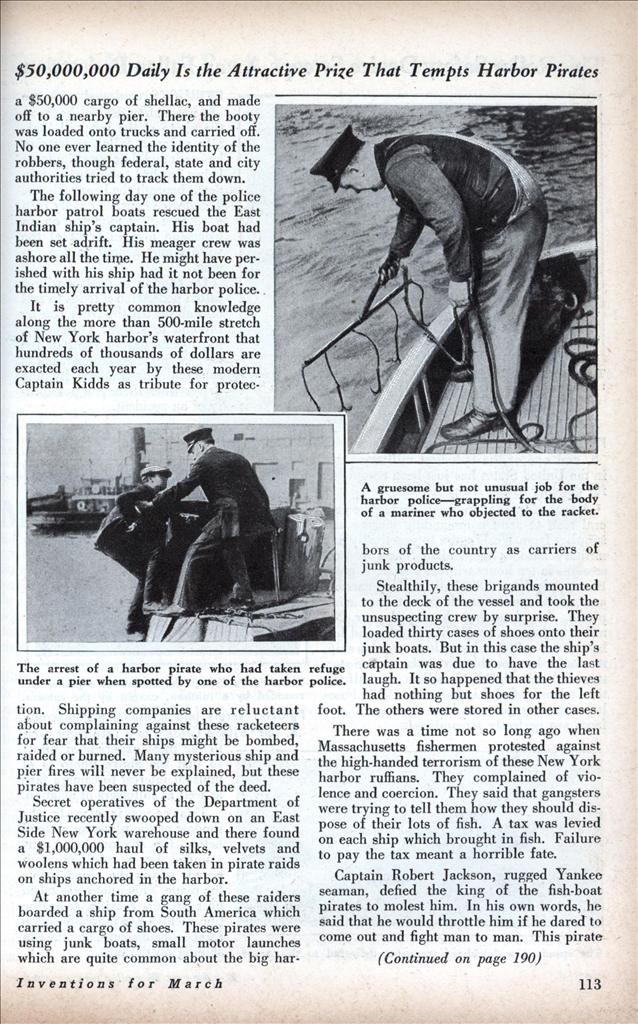 The exploits of such pre-eminent pirates as Captain Kidd and Black-beard today seem part of a mythical era. In fact, time and the romantic sensibilities of chroniclers have tended to becloud their adventures in a mist which makes it difficult to determine between fact and fancy. However, history positively re- cords that Captain William Kidd floated a Jolly Roger from the mizzen, striking terror into the hearts of helpless merchantmen. In 1691 the Council of the City of New York presented him with $500 in appreciation of his energetic and gory campaign against British mariners.

Finally, he was captured unawares in Boston and sent back to England where, after a speedy hearing before a tribunal, he was hanged on Execution Dock in London.

But what we are actually coming to, in the course of our serious discussion with Captain Malley, is that Captain Kidd and all his crew were only pikers compared to the present- day desperadoes who ply their nefarious profession on the high seas.

Some idea of the vastness of piracy existing today may be gleaned from the fact that Cornelius H. Callaghan, chairman of the Maritime Exchange’s committee for the suppression of theft and pilferage in New York recently issued a statement that henceforth all the work of his organization would be secret; that secret warfare would be waged against the harbor buccaneer.

Just how bold these modern marauders are might be seen in one piratical coup which happened in New York bay, in the shadow of the Statue of Liberty, not so very long ago. A ship from an East Indian port, flying the Union Jack, was at anchor. On the offshore side of the vessel was a lighter, a barge-like craft, partially filled with shellac. It was part of the $100,000 cargo brought from East India.

It was a dreary night. A dull haze hung over the harbor. Long boats moved across the surface like long, ghostly fingers. It was bitter cold. The loneliness alone could fill the sturdiest of mariners with cold shudders. One might well have been marooned in a Caribbean monsoon belt.

The captain was seated at a raggedy table, penning a note to his wife in faraway Liverpool. Only the weird howl of the wind or the occasional toot of a boat whistle intruded on the creepy stillness of the night.

Suddenly, the captain was startled by the swishing of water and the tooting of a tug just alongside him. He was told that he was going to be taken down the river. A move which had to do with harbor traffic regulations. He grumbled and went out to see what all the fuss was about.

No sooner did he appear on deck than he was knocked down, trussed and gagged. All this was done with a precision and regularity of teamwork which would have put the swashbuckling, cutlass-swinging boys of old to shame. There was nothing of the D’Artag-nan atmosphere here. These harbor villains were bent on brutal business.

The subdued captain was tied to a mast and the pirates stole his lighter, laden with a $50,000 cargo of shellac, and made off to a nearby pier. There the booty was loaded onto trucks and carried off. No one ever learned the identity of the robbers, though federal, state and city authorities tried to track them down.

The following day one of the police harbor patrol boats rescued the East Indian ship’s captain. His boat had been set adrift. His meager crew was ashore all the time. He might have perished with his ship had it not been for the timely arrival of the harbor police.

It is pretty common knowledge along the more than 500-mile stretch of New York harbor’s waterfront that hundreds of thousands of dollars are exacted each year by these modern Captain Kidds as tribute for protec- tion. Shipping companies are reluctant about complaining against these racketeers for fear that their ships might be bombed, raided or burned. Many mysterious ship and pier fires will never be explained, but these pirates have been suspected of the deed.

Secret operatives of the Department of Justice recently swooped down on an East Side New York warehouse and there found a $1,000,000 haul of silks, velvets and woolens which had been taken in pirate raids on ships anchored in the harbor.

At another time a gang of these raiders boarded a ship from South America which carried a cargo of shoes. These pirates were using junk boats, small motor launches which are quite common about the big har- bors of the country as carriers of junk products.

Stealthily, these brigands mounted to the deck of the vessel and took the unsuspecting crew by surprise. They loaded thirty cases of shoes onto their junk boats. But in this case the ship’s captain was due to have the last laugh. It so happened that the thieves had nothing but shoes for the left foot. The others were stored in other cases.

There was a time not so long ago when Massachusetts fishermen protested against the high-handed terrorism of these New York harbor ruffians. They complained of violence and coercion. They said that gangsters were trying to tell them how they should dispose of their lots of fish. A tax was levied on each ship which brought in fish. Failure to pay the tax meant a horrible fate.

Captain Robert Jackson, rugged Yankee seaman, defied the king of the fish-boat pirates to molest him. In his own words, he said that he would throttle him if he dared to come out and fight man to man. This pirate chief exacted $5 from the skipper of every fish vessel which came into port.

After his challenge had reached the pirate’s den, Captain Jackson rode defiantly into New York bay with a cargo of fish. He had surrounded himself with a guard of two-fisted fighters as well as a squad of police. There was little doubt that his head was demanded by the pirate as a trophy.

The valiant captain who had called the bandit’s bluff got a peek of pearl handles and long knives, as threats were made from afar to dispatch him to the sailors’ snuggest harbor.

One of the greatest precautions taken by the federal and the city harbor police patrols comes when there is to be a foreign shipment of gold. Hardly a week passes but what millions in gold bullion are not exported. During the past year the gold sent to France ran into the hundred millions. A small army is on hand to protect this cargo against any surprise plot.

A rather rich harvest was taken recently in one raid when three cases of gold watches and a case of solid silverware were snatched from the hold of a ship which was bound for England. In this instance the slick freebooters bribed one of the clerks on the pier into tipping them off on any valuable shipments.

Then the pirate chieftain accidentally ran into one of the specified boat’s crew in a waterfront speakeasy. A few hearty words. Another bribe. Then the hen was ready to lay the golden egg.

On the eve of the ship’s departure, this member of the crew who had been reached by the buccanneer wandered casually back to the boat. Five watchmen were shivering in the biting cold. It was after midnight.

The ship’s traitor offered them nips of rum to warm their withering frames. But this modern Judas really gave them a poison potion, so potent that in fifteen minutes the five men were stretched out on the deck. Their consciousness was also blotted out by the pummeling they got at the hands of the raiding band. The pirates made a clean getaway.

A few days later another gang did not fare so well. They were caught with a cache of copper. The harbor police were summoned by a wireless tip. They trailed these pil- ferers to their lair, unearthing thousands of dollars worth of copper.

Just as in the case of big-time jewel crooks, the harbor pirates follow the fence system. That is, they do not actually dispose of their loot themselves but they give it to a go-between who in turn sells it. Police usually try to apprehend the fences as well as the hi-j ackers.

One of the most desperate and fear-inspiring bad men of the New York waterfront was Bill Lovett, who in his day was crowned the czar of the pier racketeers and was the acknowledged leader of a pirate gang. His reign of terror was brought to a close in 1923 when one of his lieutenants rebelled and in the mutiny that followed went the life of Bad Bill Lovett.

Lovett attained leadership of the dock wallopers in 1921, when he disposed of Dinny Meehan. During the next two years six other murders were charged to “Wild Bill”, but the police were never able to obtain a conviction.

Bill Lovett ruled his pirate gang with a hand of iron for over two years, although he was forced to rest in the hospital several times when rivals, jealous of his monopoly of the dock and harbor loot, attempted to put him out of the way. Finally in 1923 Lovett was found dead in the shabby room which had been his headquarters.

Pegleg Lonergan was the next boss of the harbor pirates, but his leadership was ended abruptly on Christmas Eve, 1926, when he shot it out with rivals. Only recently the body of William Simpson was found on the waterfront, the twenty-first man to die in the fight for the leadership of this gang.

In the rum-running racket one finds the pirate tactics rife. However, seldom do these exploits become public. No injured or robbed booze racketeer dares squeal if his ship and cargo of contraband are captured and taken away from him. Only recently a gang of river pirates overcame the crew of a rum ship and got away with a $250,000 liquor haul.

Although most of the big sea-port cities of the country have their share of pirate outrages, New York seems to exceed in this form of pilferage and sabotage because it has nearly 750 piers on its waterfront area with over $50,000,000 worth of cargoes brought in daily.