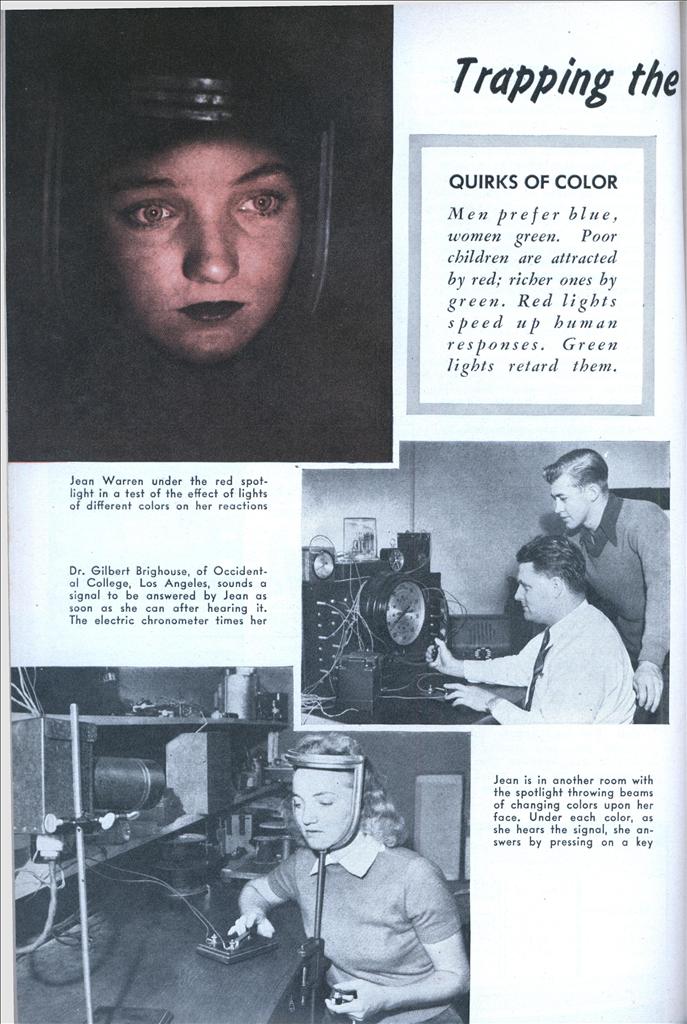 Trapping the Secrets of Color

HUMAN reactions to colors are being studied at various universities and other institutions. When the scientists have the data on which to base opinions, their findings will be influential in lighting and decorating schemes. Certain basic facts have emerged already. It has been determined that red is a stimulus and blue is soothing to most of the subjects.

In general, men seem to prefer blue, and women green. Children of poor parents find red the most appealing color, while those from wealthier homes like green better. Individual reactions, of course, are multitudinous in their variety and still largely inexplicable. Yellow may be the favorite color of one woman, while another finds exposure to yellow light nauseating.

Dr. Gilbert Brighouse, associate professor of psychology at Occidental College in Los Angeles, has been conducting tests there with hundreds of students of both sexes in a black-walled basement room, exposing their eyes and faces to various colors while recording measured responses. Eventually, he expects to test them with their faces shielded and other areas exposed to colors.

One test was repeated 455 times with each of 17 students. A spotlight sent a beam, first of one color and then of another, to the face of the subject. Dr. Brighouse sat in a room above. On his desk was a key which sounded a signal in the room below. He pressed the key; each student, as soon as he heard the signal, pressed a similar key, and an electric chronometer timed the action.

The quickest responses came when the red spotlight was on. Dr. Brighouse calculated that they came one-eighth faster than when untinted light was turned on. In the case of one youth, only one five-hundredth of a second elapsed between impulse and response; the time under normal light was sixteen one-hundredths of a second. A blue light retarded response to almost exactly the same degree as the red stimulated it.

Psychologists of Harvard University and the University of Chicago tested 2,500 children with six spectral colors and found that blue was the favorite. The second choice, green, was considerably behind blue, but red was a close third. Violet, yellow, and orange were chosen in that order. Similar tests were made with somewhat older chil- dren and it was found that green now was the favorite color, with blue, violet, orange, and yellow chosen in that order. It was during this experiment that the fact emerged that poorer children preferred red, while wealthier ones chose green first.

At the University of Kansas 343 students were tested to determine their preference in colors. Spots of blue, green, red, amber, and clear light were thrown on a ground-glass screen in succession, and then in combinations of two colors each. In the single colors men chose blue, and women green. Red was the second choice of both. In the combinations the men preferred red and blue and the women chose the clear light with the green.

In an effort to make the surroundings of patients at the New York Psychiatric Institute and Hospital as pleasant as possible, Dr. S. E. Katz examined them as to their color preferences and found that the men chose green, and the women red. Carrying the examination to those who had been inmates of an asylum for three years, Dr. Katz found that blue was chosen by the majority of both sexes. Among patients of still longer standing, orange was the favorite color.