I wonder if the people from Antiques Roadshow thought they came up with this idea first. 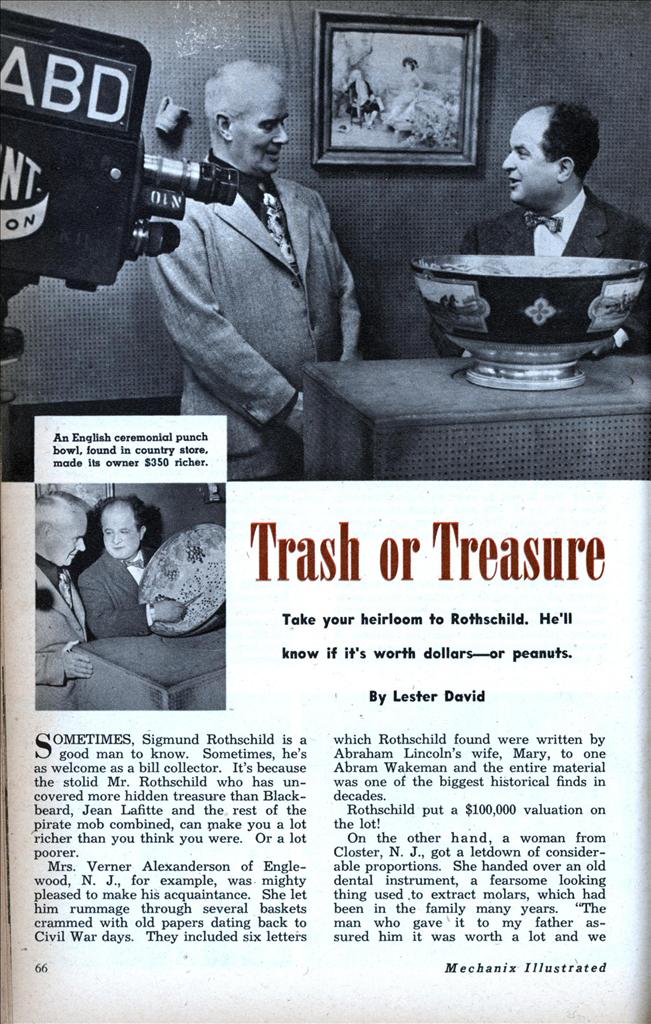 Take your heirloom to Rothschild. He’ll know if it’s worth dollars—or peanuts.

SOMETIMES, Sigmund Rothschild is a good man to know. Sometimes, he’s as welcome as a bill collector. It’s because the stolid Mr. Rothschild who has uncovered more hidden treasure than Black-beard, Jean Lafitte and the rest of the pirate mob combined, can make you a lot richer than you think you were. Or a lot poorer.

Mrs. Verner Alexanderson of Englewood, N. J., for example, was mighty pleased to make his acquaintance. She let him rummage through several baskets crammed with old papers dating back to Civil War days. They included six letters which Rothschild found were written by Abraham Lincoln’s wife, Mary, to one Abram Wakeman and the entire material was one of the biggest historical finds in decades.

On the other hand, a woman from Closter, N. J., got a letdown of considerable proportions. She handed over an old dental instrument, a fearsome looking thing used ,to extract molars, which had been in the family many years. “The man who gave it to my father assured him it was worth a lot and we have been cherishing it,” she declared.

Thereupon Rothschild delivered his judgment. “This gadget was manufactured in Brooklyn in 1850,” he asserted. “It is worth . . .”

Rothschild, you see, is one of the country’s foremost appraisers of antiques. Currently, the balding little gentleman with the calm, efficient manner of a scientist is setting hoarders of odds and ends agog with an immensely popular television show called “Trash or Treasure” beamed Thursday evenings over the Du Mont TV network.

The program is devoted to a methodical appraisal of relics most everybody’s got stashed away in closet recesses, attics, old suitcases and garage corners or the heirlooms proudly displayed on mantel shelves. Rothschild, with clinical detachment, puts a price tag on everything anybody cares to bring in.

On the show as well as in his private appraisal work over the past 20 years he has told many thousands of persons their “trash” was worth cash. To balance things off, he’s also had to inform an awful lot of hopeful folks their “treasures” were just so much junk.

That’s how it is when people come to the studio with anything from old spitoons to umbrellas, great-grandma’s coffee grinder to mummified hound’s teeth, music boxes to a pair of red stockings worn by Napoleon. He examines them all and passes dollars-and-cents judgment.

When he does, the darndest things can happen. Not long ago Michael Mindlin, Jr., of New York City brought along a manuscript of Anna Christie, the Eugene O’Neill drama which won the Pulitzer Prize in 1922. Shortly before air time, Mindlin cornered Arnold Peyser, the show’s producer, and asked anxiously: “Have you gotten word on this thing yet?”

But it lifted again shortly after and stayed lifted when Rothschild announced it was the working script used for the rehearsals of the actual production of Anna Christie with revisions made in O’Neill’s own handwriting. It’s value ? A cool $1,200!

It was something else again for a New Jersey train conductor who arrived clutching a 1943 penny. Because of wartime metal shortages, no bronze cents were struck by the U. S. Mint that year. This one, however, was bronze. The trainman thought it was the find in a million. If it really was he could name his own price. As a matter of fact, he was so convinced of its value that he kept the coin in a vault.

Rothschild told him that his penny was worth exactly that. It was a wartime-issue cent upon which someone had put a coating of bronze to fool gullible collectors!

“About 90 per cent of the things people dig out from trunks and attics is trash,” declares Rothschild, “but the other ten per cent has cash value, sometimes far beyond anything the owner dreamed of.”

It is to the pursuit of this ten per cent that Rothschild has devoted his life. In addition to the television show he conducts a private appraisal business at his office, 119 West 57th St., New York City, and travels around the country looking in on antique fairs and exhibitions wherever he can find them.

To the office comes a steady stream of persons bearing ancient rocking chairs, statues, paintings, old letters and bric-a-brac of every size, shape and construction. Some leave happily, others sadly.

Happy, indeed, was the woman who learned that a batch of old Valentines from the 1880’s she had found in a drawer were worth $600. And the smile was broad on William Mathews’ face when he was told that a set of chessmen purchased at an auction long ago had been carved from ivory by Chinese craftsmen and were valued at $500.

Sorrowful was the aged South Carolina couple who had treasured through the years an old violin given them by a Civil War general. It was labeled Stradivarius and the old man and his wife had clung to it constantly as a guarantee against indigence. With the money they expected to realize from its sale, they were going to retire and travel.

But Rothschild had to tell them the violin was only a copy, one of many hundreds manufactured by a plant in Germany in the late 19th century and not a priceless creation of the famed violin maker of Cremona. It was worth only $65.

A woman came in with a painting which had been gathering dust in her attic for 38 years. It had cost only $105. Would Rothschild—who incidentally lists art restorations among his multiple talents—do a job on it? He did and presented the thunderstruck woman with a genuine Titian valued between $30,000 and $100,-000. It seems that the painting had been sold at an auction of the effects of the late Stanford White, the great architect and no one had realized its actual worth.

But a pair of red stockings formerly belonging on the legs of the Little Corporal himself, Napoleon Bonaparte, was valued at only $20. As a rule, Rothschild explained, old fabrics don’t have too much price appeal.

If you suspect that you may be harboring a gem, take it to a reliable local antique dealer. Or Rothschild may even give you an approximate valuation by mail order if you send him two or three clear photographs from several angles accompanied by as complete a description as possible and what you know of its historical background. For this he charges $5 per appraisal.

If you have something that might do for an appearance on the “Trash or Treasure” show, write a description and send it to the program, Du Mont Television Network, 515 Madison Ave., New York 22, N. Y. If it makes the grade, you will be invited to appear with it.

So go ahead and rummage. Remember that 10 per cent of the accumulated stuff in the nation’s attics is worth money, sometimes real big money.

Who wouldn’t take a flyer on a ten-to-one shot, particularly if the payoff may be a dollar sign followed by a numeral and lots of lovely zeros?*