Mechanix Illustrated
Issue: Mar, 1951
Posted in: How to
Tags: collectors
3 Comments on Treasure in Your Attic (Mar, 1951) 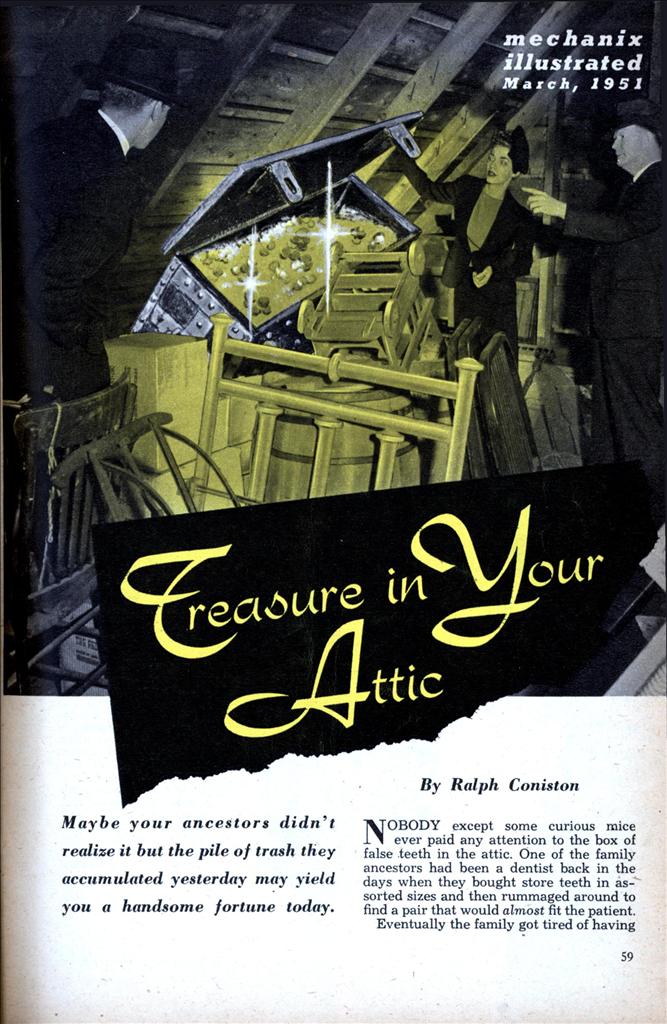 Treasure in Your Attic

Maybe your ancestors didn’t realize it but the pile of trash they accumulated yesterday may yield you a handsome fortune today.

NOBODY except some curious mice ever paid any attention to the box of false teeth in the attic. One of the family ancestors had been a dentist back in the days when they bought store teeth in assorted sizes and then rummaged around to find a pair that would almost fit the patient. Eventually the family got tired of having the old metal teeth around and decided to get rid of them. A friend suggested taking them to a jeweler to find out what the metal was. It was a happy idea! Those false teeth were almost solid platinum, a metal formerly so cheap that, until it came into use for jewelry in the early part of this century, it was used even for lightning rods. The teeth were worth around $300 a pair and the lot brought nearly $8,000.

Almost every family has an accumulation of old “junk” in the attic, cellar, closets, or barnâ€” usually things that they intend to get rid of some day when they get around to it. Probably you have, too. But be careful when you dispose of it for your trash pile may actually be a treasure trove.

Even if you find no platinum, collectors and interior decorators are willing to pay astounding prices for objects most of us would think worthless. For example, an old brace and bit could be sold for $30, a child’s toy for $150, an old pair of handcuffs for $400! Old buttons, shaving soap boxes, packs of matches, glass jars, whiskey bottles, powder horns, handbills, bills for merchandiseâ€”in fact almost everything from the past is worth money.

Recently a family in Toms River, N. J. sold its house to an electrician for $8,500. They felt that some belongings were not worth moving and included them in the sale by making the deed read “house and contents.” Among the trash left behind was an oil painting which the electrician sold to the Milch Galleries in New York for $2,500, a sum greater than his $1,500 down payment on the house.

Nor is $2,500 a mammoth price for a painting. A portrait of Thomas Jefferson by Gilbert Stuart was bought from his descendants a few years ago for $75,000 and old masters may bring hundreds of thousands of dollars.

Maybe you have no oil paintings around the attic. But almost every family has prints, etchings, engravings or lithographs Not long ago a Currier & Ives colored lithograph sold for $270. And the Currier & Ives prints, while highly esteemed, are by no means the most valuable.

Antique treasures often go unnoticed. When Israel Sack, one of New York’s veteran antique dealers, was first starting in business, he made a prospecting trip to New Hampshire. In a barn belonging to a schoolmarm he found a chest of drawers for which he was happy to pay $750. But one of the prize furniture finds of our time was a lowboy discovered in a southern home which fetched $32,000.

Books can bring you unexpected wealth, too. Charles Everitt, a dealer in old books, was visiting an elderly woman friend living in Scarsdale, N. Y.

“Charles, I need a new hat,” she said. “Won’t you look through my bookcase and see if there’s a book you can give me ten dollars for?”

Everitt glanced over the collection. A few minutes later he asked, “How would you like a fur coat besides the new hat?” He had found a fine first edition of Melville’s Moby Dick for which he paid the woman $500.

But even Moby Dick is small fry compared with some volumes. Not long ago a copy of the Bay Psalm Book, the first book published in America, brought $151,000.

Pamphlets may be worth big money, too. Poe’s famous short story, The Murders in the Rue Morgue, was first published as a pamphlet. A particularly fine copy of this was bought recently for $25,000.

The value of books is often increased if they have been inscribed by their authors. The poet Madison Cawein brought Charles Everitt several volumes of James Whit-comb Riley’s poems, each personally inscribed to Cawein. Everitt paid $120 for them, although without the inscription it is doubtful that they would have been worth a third of that.

Later Everitt made a trip to Cawein’s home where for $4,500 he bought some old letters which had been written to Cawein by Riley. Such correspondence from his- toric or literary figures often brings big pricesâ€”the writer need not even be well-known if the subject matter is historically important.

Old maps, charts, magazines and newspapers also may prove to be valuable. Robert Hendrickson has a copy of a newspaper giving an account of Washington’s funeral for which he paid $30 and which he would not sell for a good deal more.

Everitt, whose specialty is books and documents, is asked occasionally to buy other objects. He was looking over some books belonging to a widow in Harrisburg, Pa., when she brought out a box of stamps and asked, “Will you give me five dollars for these?”

Everitt glanced at them and told her, “Look, these stamps are worth a good deal more than five dollars. I’ll tell you where to take them.”

“Just give me five dollars,” she insisted.

Stamps often are more valuable if left attached to the envelopes. In 1930 Miss Natalie Sumner Lincoln found a cover (as these are called) among her mother’s correspondence. On it was an old 10c stamp issued in 1847 by J. M. Buchanan, postmaster of Baltimore. It sold for $10,000.

Coins are another possible attic treasure Last year, when the estate of a Denver man was being settled, his son found two rolls of dimes in his safety deposit box. The dimes were new. One roll was of 1921 dimes marked “D” to show they had been minted In Denver. They were worth 30c each of triple their original value. But the other roll was of 1916 Denver mintage worth $175 or $3.50 each.

Old medals may be worth a lot, too. The medal awarded to those who took part in the famous “Charge of the Light Brigade” is valued at $10,000.

Perhaps you have an old musket hanging over your fireplace. If it happens to be a revolutionary musket made by Ferguson, you are due for a nice piece of changeâ€”it may be worth as much as $2,000.

Or maybe you have an old pistol in a trunk somewhere. A few years ago Robert Hendrickson, a New York dealer in old firearms, went to an ancient mansion where he was offered an 1888 Colt revolver. It was what is known as a Charter Oak Colt. Samuel Colt had bought part of the famous Connecticut Charter Oak when it was felled and used it to make stocks for presentation revolvers. This particular pistol was owned by the great granddaughter of one of Colt’s backers. Hendrickson was glad to give $250 for it.

As for the original Colts made in Paterson, N. J., between 1836 and 1840, Hendrickson says they are worth anywhere between one and twenty thousand dollars.

Perhaps, like Paul Wilkens of Pittsburgh, you have a silver porridge bowl. Wilkens got $320 for hisâ€”and others have brought many times that price. A silver tankard sold recently for $1,450, a silver cup for $3,500. And the prize piece of them allâ€”the famous Sons of Liberty bowl made by Paul Revereâ€” was knocked down at auction for $155,000.

Don’t think you must uncover something fabulously valuable in order to make your search worth while. What you find may look like shredded paper to you and still be worth good money. A housewife in upper New York, looking over the accumulation in her attic, found what seemed to be a bundle of cut-up newspapers. Spreading them out, she discovered they were really stencils such as our ancestors used to decorate walls, floors, tinware and chairs. She took the trouble to investigate the market in such things and discovered that the bundle of newspapers was worth a bundle of cash. There were 176 stencils and she received $132 for the lot.

Consider this mess of trash assembled in a hayloft in-eastern Ohio not long ago: a box of nails, a box of assorted buttons, three old mail-order catalogues, a circus poster, a canceled ticket for passage on an Erie canal boat, three fancy valentines, a book entitled Child’s Drawing Book of Objects and an old shaving-soap box made of china.

Doesn’t sound like much, does it? But here are the prices received for the mess: there were 217′ hand-wrought nails which brought $1 each; the buttons were worth from $1 a dozen to the exciting figure of $65 a dozen, the lot bringing $89; the three mail-order catalogues sold for $8, $10 and $17 respectively; the circus poster was worth $25; the canal-boat ticket brought $1.50; the valentines were snapped up for $3.50 each; the drawing instruction book was bought for $9; and the shaving-soap box brought $21.

But the all-time high in prices for strange objects was reached a number of years ago when a chunk of iron was offered for sale at an auction in New York. This piece of metal was supposed to be the anvil used by Paul Revere in making spoons. The agents for two wealthy collectors, one of them Henry Ford, became involved in competition for the piece and ran it up to the incredible figure of $9,700.

Don’t think that every old piece of iron, every chair, every old object in your attic will bring thousands or even hundreds of dollars. Value depends upon many things besides age. For instance, coins of the Roman empire are worth little because they are so common. Rarity is one of the biggest factors in determining value. Inherent beauty, particularly in old furniture, paintings, silver, china, glass and similar objects is tremendously important. And in all types of collectors’ items, condition is paramount.

If you want to get good prices for the treasures in your home, you can’t just offer them for sale to the first bidder. Investigate their approximate value and where they can be sold at the highest prices. There are books which carl help youâ€”Treasures In Truck And Trash by Morgan Towne, published by Doubleday and Co., is one. Many other helpful books can be found in any library. Then you can ask antique dealers for aid. Also hobby magazines often carry the advertisements of persons wanting to buy or sell stamps, coins and other items.

However, even if you discover that the odds and ends in your home have little value now, don’t throw them away without checking them carefully. Remember the motto displayed in an auction gallery in Washington, D. C: “The junk of one generation is the treasure of the next.”