Modern Mechanix
Issue: Aug, 1931
Posted in: How to, Photography
No Comments on Tricks of Advertising Photographs (Aug, 1931) 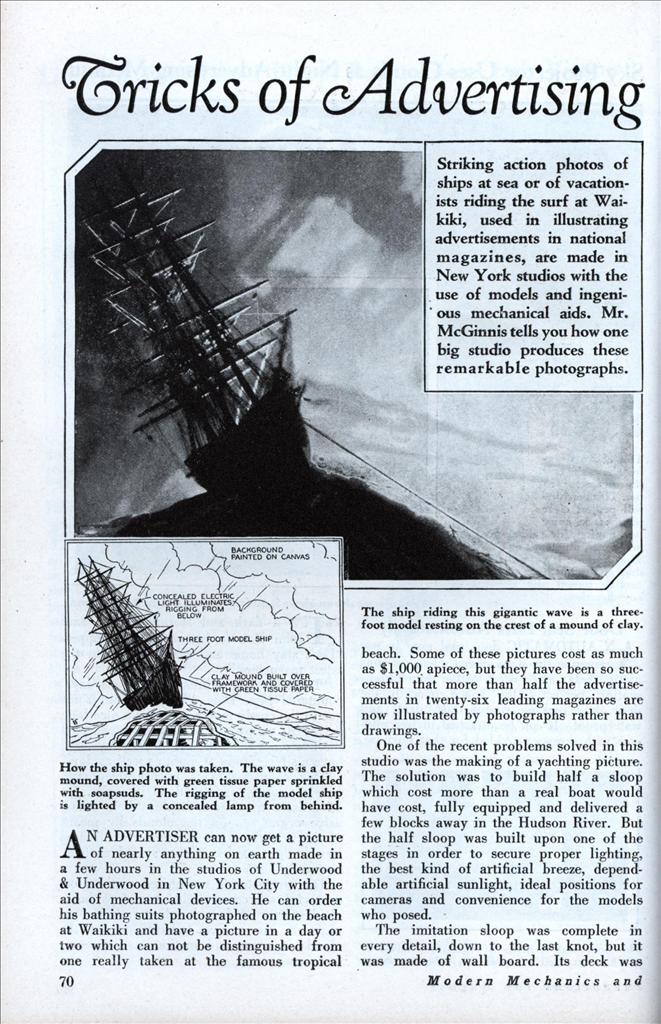 Striking action photos of ships at sea or of vacationists riding the surf at Waikiki, used in illustrating advertisements in national magazines, are made in New York studios with the use of models and ingenious mechanical aids. Mr. McGinnis tells you how one big studio produces these remarkable photographs.

AN ADVERTISER can now get a picture of nearly anything on earth made in a few hours in the studios of Underwood & Underwood in New York City with the aid of mechanical devices. He can order his bathing suits photographed on the beach at Waikiki and have a picture in a day or two which can not be distinguished from one really taken at the famous tropical beach. Some of these pictures cost as much as $1,000. apiece, but they have been so successful that more than half the advertisements in twenty-six leading magazines are now illustrated by photographs rather than drawings.

One of the recent problems solved in this studio was the making of a yachting picture. The solution was to build half a sloop which cost more than a real boat would have cost, fully equipped and delivered a few blocks away in the Hudson River. But the half sloop was built upon one of the stages in order to secure proper lighting, the best kind of artificial breeze, dependable artificial sunlight, ideal positions for cameras and convenience for the models who posed.

The imitation sloop was complete in every detail, down to the last knot, but it was made of wall board. Its deck was sloped at an angle with the floor as though it were rolling. A real binnacle was used and a real boom for the main sail, but everything else was imitation with the exception of three coats of real marine paint. The sail was only three feet high and the boat had neither bow nor stern.

A skiing picture was made in the studio much better than it could have been made in the Alps and far more economically, by using a generous supply of salt for snow. First a scaffold was built on an incline to represent the side of a steep mountain. This was covered with canvas and moistened so that the salt would adhere to it.

A painted background is usually employed for such scenes, and in this case some snowy peaks were painted on a large canvas with paint which can be washed off. Although the photograph is black and white, these backgrounds are painted in natural colors and photographed with a panchromatic plate in order to obtain the effect of reality. Real pine shrubs were used in the middle ground, between the foreground and background, to enhance the illusion. Then two girls were dressed for winter sport, also in colors, and posed on skis as though they were sliding down the incline. All their equipment was real, even to their buckskin shoe laces. The wind which blew their clothes was not real, but imitated by tying small strings to parts of the clothing, such as the mufflers and belts.

One carbon arc was used to give a cold white light, and another type of carbon to imitate daylight, having a wide enough spectrum to bring out the real values of all the colors used.

The girls in the picture used only lipstick and powder in making up, for red rouge photographs black. They were professionals in the business of posing for advertising photographs, chosen from a waiting list of more than 2,000, representing all races, all types and all ages. They are trained in facial expression and also in standing still for from one to ten seconds.

A severe storm at sea was photographed by means of a model ship riding a wave of clay which appears to be mountain high but in reality measured less than a yard from its roaring crest to the stage floor. The clay was wet when worked into the form of a wave, and over it was placed green tissue paper, which was crinkled and roughened to resemble the smaller ripples and waves of a storm. Several shades of this paper were taken on an ocean voyage by Lejaren a Hiller, studio director, to Havana and compared with actual sea water coloring under various conditions and in different climates, in order to obtain a faithful reproduction.

The top of the mound of clay was cut away to fit the hull of a model ship three feet long. It was the most complete model obtainable in New York, a full-rigged schooner with elaborate detail, built at a cost of $550. Then over the clay was spread some soap suds to imitate sea foam. A background was painted on canvas in true sunset colors, and a light was placed behind the clay wave to imitate the setting sun and to light the spars of the little ship in an artistic manner.

Soap suds solved the problem of creating a trout stream in the studio, when the picture of a fisherman was required on short notice. The fisherman was a real one, easily obtained from the list of models on file. He was completely equipped for a good catch of trout and stood in a rushing stream of green tissue paper and suds with his hip boots. The paper, sometimes called Argentine cloth, was stretched tight in some places to give the appearance of smooth water rushing swiftly by, and crinkled to show small waves and riffles. The sparkle of the water was supplied by soap suds, some of which were splashed upon the fisherman’s boots.

In this picture also the middle ground was real, made of shrubs and gravel, and the background was a pine forest painted in its natural colors.

A picture of a sea sled was easily made in the studio, whereas it would have presented insurmountable difficulties in real action because of speed and lighting. In the studio the boat glides over a sea of painted canvas and churns up a wake of cotton.

In order faithfully to reproduce the water effects, a photographer made many pictures of a real sea sled with an outboard motor such as that used in the studio, going at a speed of about fifty miles an hour. He photographed the wake, especially, at exposures of one-thousandth of a second. The studio exposure was about a second and a half.

The stern wave was made with absolute accuracy using about a bushel of white absorbent cotton, allowing a few inches of calmer water directly under the stern of the boat, where the outboard propeller has not yet struck it. The wind effect was again produced by tying the clothing back with invisible strings.

A sea wave of translucent green is made by placing a light under a wave of green tissue paper and soap suds. In this way the wave appears more real than one a painter might make on canvas.

Frequently a scene must be made in the studio with great precision, such as a “shot”

of a ship’s cabin or a subway platform, where cameras are impractical, even for the making of sample photos for the studio director, and in such cases a “property man” is sent to the scene to sketch it. He is an artist and he duplicates the coloring as well as the size of rivets, the type of steel used in pillars and the kind of lighting.

One of the studio stages has a glass floor so that a camera may be used under it to secure a picture from a novel angle. This glass is an inch and a half thick and eight feet square. It is of a high grade and polished, almost like a camera lens. By means of this invention, a genuine “worm’s eye view” can be made of shoes and feet.

A traveling crane is used to raise a camera twelve feet in the air, so that the photograph can be made looking straight down or from any other angle, the angle sometimes being responsible for turning an ordinary picture into a spectacular one.

In some cases the photographer can improve upon nature, as in the photographing of an imitation of Waikiki beach. Here the sand was the improvement. The sand of Hawaii is coral and its grains are round and do not sparkle in a picture. For this picture a different kind of sand was used, with sharp-cornered grains and bits of mica to give it an artistic glint. With real palms in the foreground, sparkling sand in the middle ground and a good imitation of Diamond Head painted for the back, the picture was both artistic and convincing, even when compared with a photo taken at Waikiki.

“Trick” photography is still used for some pictures. Distorted faces and scenes are made by pulling the film out of shape while it is still in the developer.

Double exposures convey the idea of ghosts or visions. In order to make a double picture, a black background is usually employed. At least there must be enough black in the background to accommodate the ghost figure and make it stand out. The plate may be exposed twice, once without the ghost and the second time with it in the picture, but a more accurate way is to make two plates and print them one after another on the same paper.

A new type of photography now enables the printing engraver to make a line cut from it, so that it looks like a contrasty black and white drawing rather than a photograph. The vivid contrast of light and shade in the picture is brought out by a special developer.

The genius of the Underwood & Underwood studio is also the daddy of advertising photography, Lejaren a Hiller. He made the first advertising photos, with the exception of the early patent medicine testimonials. He was the first to pose living models. Much of the technique he uses was learned in motion picture studios, but the mechanics of making still pictures is now an art of its own. He had his own studio until five years ago and owns a collection of 30,000 negatives which he made in traveling about the world and which he consults for artistic details. He is also a painter and makes illustrations for magazine covers.

He introduced the use of small models into the business. One of his successful battle pictures was made by placing tin soldiers in a basin and covering them with large bubbles of soap suds. A soft-focus lens gave the illusion of the dimness of battle smoke, and the sparkle of the bubbles simulated a terrific barrage of bursting shells.

The studios, which began in a small way, now look much like motion picture studios, with a piece of a kitchen standing in a garden, a pretty girl posing in a parlor a few feet from a subway, and a forest of trees laid away on shelves with thousands of other “props”.