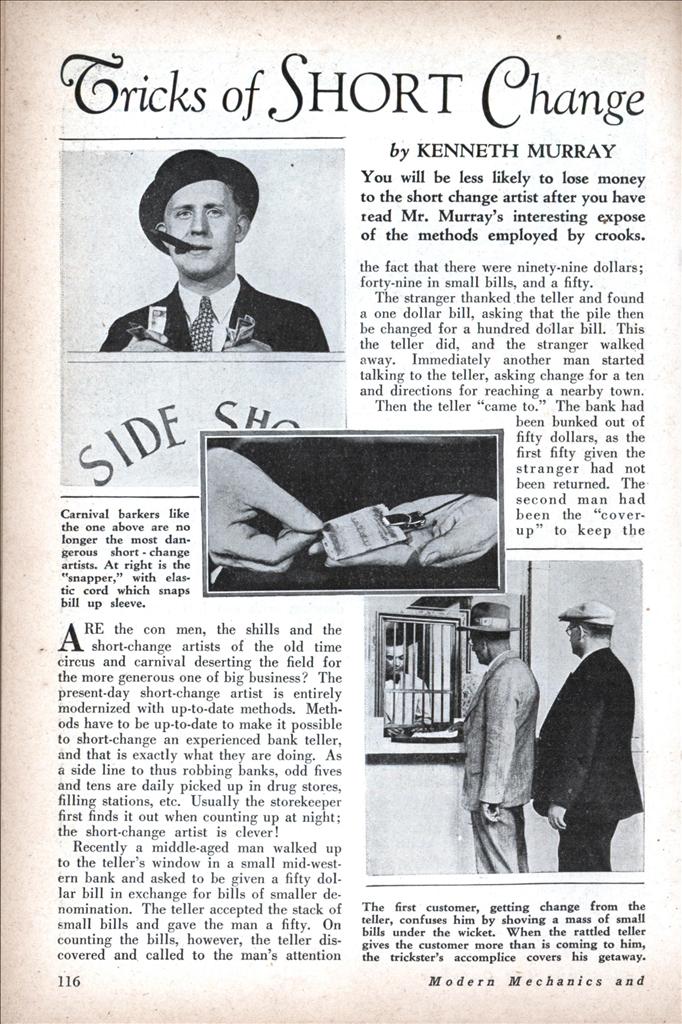 You will be less likely to lose money to the short change artist after you have read Mr. Murray’s interesting expose of the methods employed by crooks.

Recently a middle-aged man walked up to the teller’s window in a small mid-western bank and asked to be given a fifty dollar bill in exchange for bills of smaller denomination. The teller accepted the stack of small bills and gave the man a fifty. On counting the bills, however, the teller discovered and called to the man’s attention the fact that there were ninety-nine dollars; forty-nine in small bills, and a fifty.

The stranger thanked the teller and found a one dollar bill, asking that the pile then be changed for a hundred dollar bill. This the teller did, and the stranger walked away. Immediately another man started talking to the teller, asking change for a ten and directions for reaching a nearby town.

Then the teller “came to.” The bank had been bunked out of fifty dollars, as the first fifty given the stranger had not been returned. The second man had been the “cover-up” to keep the teller’s mind off the transaction and to give the first a chance to get away.

Organized short-changing of filling station attendants is becoming common and it is evident that there are a great many artists engaged in this branch of the business. The tricks are many and varied. One favorite is to offer a twenty in payment of a bill. On getting the change, the stranger will count it over and discover that five or ten dollars are missing. The method is to fold over the five or ten and hold it between two fingers underneath another large bill in one hand, while asking the station attendant to count the change in the other hand. This trick has been the means of cheating a great many oil station men. The loss is seldom discovered until check-up time at night.

Another method of making change appear “short” a bill of any denomination is the use of a clever sleeve attachment. It is merely an elastic running up the coat sleeve; at the end is a spring paper-fastener. The con man merely sends one bill from his change up his sleeve, and the dealer can, of course, see no method of accounting for the loss excepting the most obvious one. that he has made a mistake!

Store clerks, because they handle numbers of bills daily, become careless and are easily deceived by the following trick. The customer shows a twenty dollar bill in paying for a purchase. This he apparently gives to the clerk after making sure that the clerk notices the denomination. In reality a smaller bill, concealed underneath the twenty, changes hands and the clerk gives change for twenty dollars when he has received only a one or a five spot. The clerk usually does not discover his loss until the cash register shows him to be short when the time comes for checking up the day’s receipts at night.