Modern Mechanix
Issue: Feb, 1929
Posted in: Crime and Police, How to
9 Comments on TRICKS of the Filling Station Gyp Exposed (Feb, 1929) 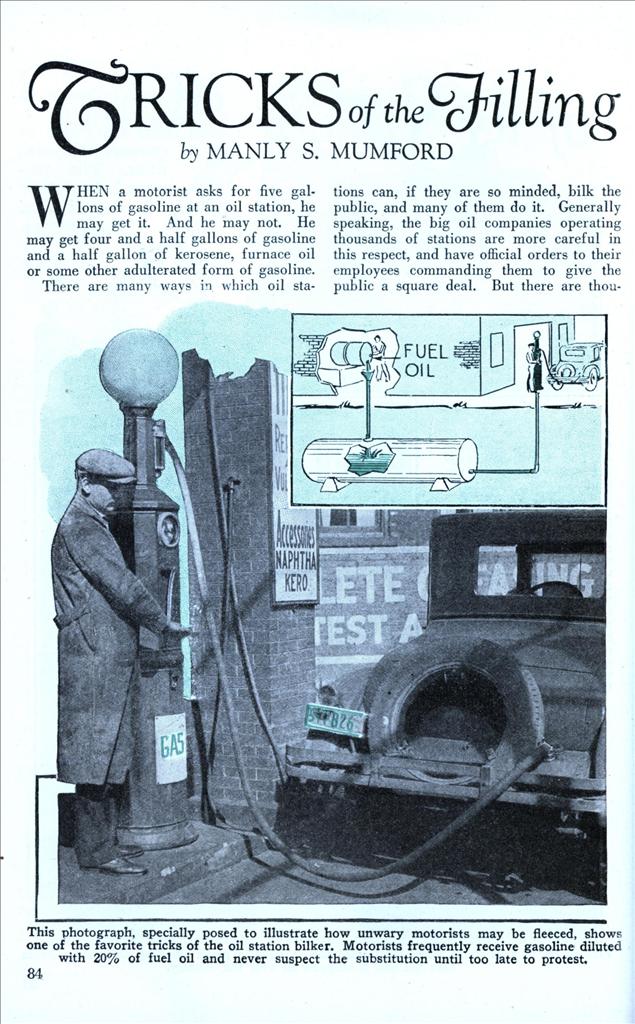 by MANLY S. MUMFORD WHEN a motorist asks for five gallons of gasoline at an oil station, he may get it. And he may not. He may get four and a half gallons of gasoline and a half gallon of kerosene, furnace oil or some other adulterated form of gasoline. There are many ways in which oil stations can, if they are so minded, bilk the public, and many of them do it. Generally speaking, the big oil companies operating thousands of stations are more careful in this respect, and have official orders to their employees commanding them to give the public a square deal. But there are thou- Station Gyp Exposed sands of wildcat stations run by individuals who are not so scrupulous.

There are two general methods of cheating the public at oil stations. One is to give the buyer inferior or adulterated goods and the other is to give him only a part of what he pays for.

First of all is the adulteration of gasoline.

There are many grades of gasoline, some better than others, but the reputable o!l stations sell only three or four grades, each of which is almost pure gasoline, the grades varying only in their volatility or ability to turn into inflammable vapor. The lower grades will choke up the carburetor on an automobile, causing the motor to spit and choke, and frequently in cold weather, die.

Many of the cheating oil stations handle low grade gasoline, letting the public think it is high grade gas.

Some of them handle the high grade fuels, nationally advertised brands, but mix them with other petroleum products which are cheaper and cannot be detected.

Kerosene in the Gas For instance if the station owner has to pay fifteen cents a gallon for gas and only 12 for kerosene, he may slip fifteen gallons of kerosene in a hundred gallon tank of gasoline.

Another favorite bet of the bilker is to use furnace oil. This costs him perhaps only 7 or 8 cents a gallon and he may be able to slip into your tank four-fifths gasoline and one-fifth furnace oil. The buyer cannot tell this either by taste or smell.

On lubricating oil the passing motorist may be cheated. It is a simple thing to have an oil tank with a label pasted on it. The label will probably indicate that the oil within is a high grade oil, bearing a trade mark or nationally known insignia.

The filling station owner pays perhaps 50 cents a gallon for a high grade oil. He sells it for a dollar a gallon, which is a fair profit. But low grade oil can be had for as low as 20 cents a gallon, leaving a much larger profit. Here again there is not much chance of detection by the buyer. He may find that his oil does not “wear” as well as he thinks it ought, but he won’t find it out until too late.

The most favored method of cheating an automobile owner on buying gasoline, is known in the trade as “shorting the hose.” Normally the attendant pumps the gas directly from a tank in the ground into the gas tank in the automobile. He uses a hose perhaps five feet in length. When five gallons have been delivered from the pump into the hose, five gallons have not yet entered the tank. A quart, normally, remains in the hose, and unless the attendant drains the hose into the auto tank, the motorist is short a quart of gasoline, getting four gallons and three quarts, instead of five gallons.

Another method of cheating which is more costly is the method of cheating the buyer of a whole gallon on his purchase. Most pumps are equipped with a bell which rings or an arrow which points to the number of gallons run through the pump. It is easy for a mechanic to fix the bell so that it will ring when three quarts have passed instead of a gallon or to manipulate the arrow so that it will point to five when as a matter of fact only four gallons have been delivered.

Then there is the method known as “going easy on the handle.” If the attendant turns the crank at a certain speed the gas flows into the hose at a certain rate. If the handle is turned fast at first and extremely easy at the end the full amount of gas will not enter the hose. Sometimes the attendant will turn the handle slowly at the end of the stroke and will draw almost no gas at all, though the crank turns and the indicator or arrow with it.

Even draining the hose is not an absolute protection against cheating, because some lengths of hose have a little valve at the end which goes into the tank. The attendant can shut this valve and drain the hose to his heart’s content, but no more gas will flow into the motorist’s tank.