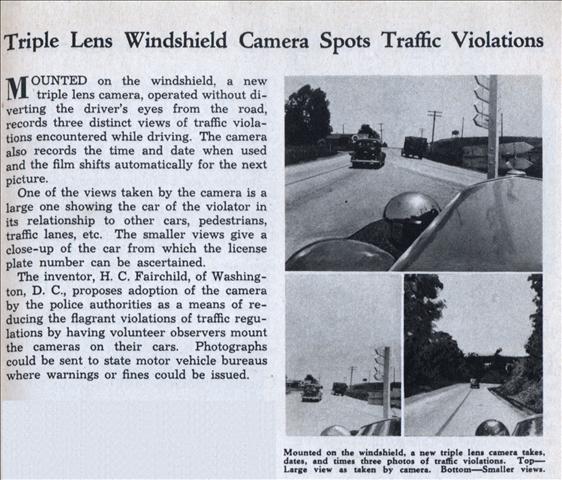 Triple Lens Windshield Camera Spots Traffic Violations
MOUNTED on the windshield, a new triple lens camera, operated without diverting the driver’s eyes from the road, records three distinct views of traffic violations encountered while driving. The camera also records the time and date when used and the film shifts automatically for the next picture.

One of the views taken by the camera is a large one showing the car of the violator in its relationship to other cars, pedestrians, traffic lanes, etc. The smaller views give a close-up of the car from which the license plate number can be ascertained.

The inventor, H. C. Fairchild, of Washington, D. C., proposes adoption of the camera by the police authorities as a means of reducing the flagrant violations of traffic regulations by having volunteer observers mount the cameras on their cars. Photographs could be sent to state motor vehicle bureaus where warnings or fines could be issued.