Booth girls’ costumes have gotten a lot skimpier since the fifties, though I suppose this outfit wouldn’t look that out of place at a Japanese gaming con. 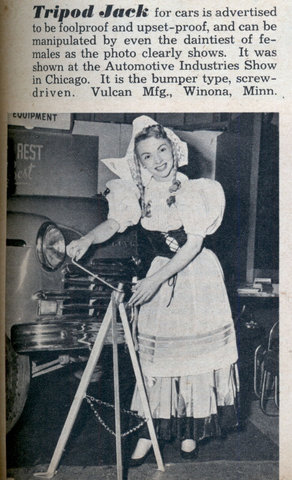 Tripod Jack for cars is advertised

to be foolproof and upset-proof, and can be manipulated by even the daintiest of females as the photo clearly shows. It was shown at the Automotive Industries Show in Chicago. It is the bumper type, screw -driven. Vulcan Mfg., Winona, Minn.