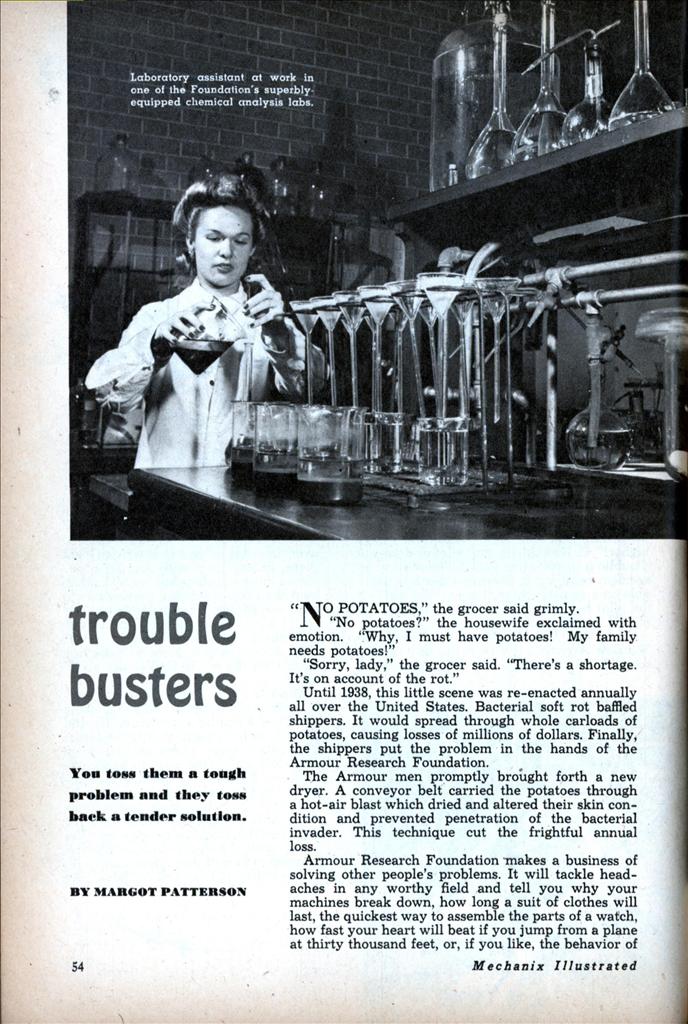 You toss them a tough problem and they toss back a tender solution.

“NO POTATOES,” the grocer said grimly.

“No potatoes?” the housewife exclaimed with emotion. “Why, I must have potatoes! My family needs potatoes!”

“Sorry, lady,” the grocer said. “There’s a shortage. It’s on account of the rot.”

Until 1938, this little scene was re-enacted annually all over the United States. Bacterial soft rot baffled shippers. It would spread through whole carloads of potatoes, causing losses of millions of dollars. Finally, the shippers put the problem in the hands of the Armour Research Foundation.

The Armour men promptly brought forth a new dryer. A conveyor belt carried the potatoes through a hot-air blast which dried and altered their skin condition and prevented penetration of the bacterial invader. This technique cut the frightful annual loss.

Armour Research Foundation makes a business of solving other people’s problems. It will tackle headaches in any worthy field and tell you why your machines break down, how long a suit of clothes will last, the quickest way to assemble the parts of a watch, how fast your heart will beat if you jump from a plane at thirty thousand feet, or, if you like, the behavior of lubricants under the tremendous hydraulic pressure of 1,500,000 pounds to the square inch.

A bright idea, a lot of enthusiasm and very little cash launched it in 1937. The idea was a simple one. Giant corporations had their own laboratories to solve their problems but the small businessmen, faced with similar problems, were out’ of luck. They couldn’t afford to maintain even one technician. So the Foundation was started with the idea of giving the “little man” a break.

With a scanty supply of equipment and the blessings of the Illinois Institute of Technology, three willing young scientists set themselves up in three rooms of an ancient apartment house and asked for tough problems to solve. People laughed, but once the Foundation started it boomed. Tales of the unique organization spread, and new clients beat a pathway to the ugly red brick building on Chicago’s South Side, as Harold Vagtborg and his associates licked one tough problem after another.

Business came from far and wide. And not only small business. Executives of large corporations were frequent visitors. Where their own laboratories had failed they were willing to try anything. The Foundation almost always came up with the right answer. Amazed and grateful, these executives showered the young men with equipment and materials.

Today 200 scientists carry on their work in several well equipped buildings. More than 1,500 clients have been served. The astonishing number of 4,000 research tasks have been undertaken, saving millions of dollars for private industry and the Government.

There is very little of the orthodox about the Foundation. Its members read all there is to read about a subject, then toss aside the textbooks and tackle the problem from the beginning. This open-minded approach speeds the solution and keeps the Foundation from old and futile lines of thinking.

“For years we have been told that such and such is so. But is it so? Let’s prove it, or try to.”

When the Foundation finishes a research task for a client the theories, methods and patents on it belong exclusively to that client. None of his competitors has access to the findings. If he makes a fortune from the discoveries, well and good. The organization is run on a non-profit basis, asking nothing but a modest service fee, agreed upon in advance. The staff estimates the approximate cost of materials, tools, equipment, salaries and overhead, and this is the fee it charges.

Sometimes a baffling problem can be settled in ten minutes and sometimes a dilemma that looks simple on the surface will take a year of careful study. Teamwork is the keynote of the Foundation’s success. The Armour Associates don’t believe in “too many cooks spoiling the broth.” If two heads are better than one, then three are better than two. Round table discussions—fact finding from many angles—go on daily. Often new tools and new methods must be invented to deal with a problem that won’t yield to known methods. When this happens, the man with the idea doesn’t hesitate to call upon metallurgists, electrical experts, mechanical engineers, chemists, or any other staff members. The answer may end up looking like something out of Rube Goldberg, but it works. Their group research means speedy results. And better ones than the lone genius in the garret can produce.

The staff is a collection of able young scientists. Its director and executive members are all in their thirties. They are constantly on the lookout for up-and-coming youngsters completing their technical training. They say that young blood and young ideas go hand in hand, and young ideas keep the Foundation on its toes and make it the success it is.

Plain horse sense solves many a problem, as in the case of the leaking fountain pen. Business executives who traveled by plane were apt to find that they had a pocketful of ink when the trip was over, because at high altitudes the air pressure was too low to keep the ink in the pen. It wasn’t long before a manufacturer brought this problem to the Foundation. The Armour technicians tackled it with exhaustive care. They made every test and experiment. Then, suddenly, the answer struck them: Why not give the pen two reservoirs, one connected to the other? At low altitudes the ink would stay in the main reservoir, at high altitudes it would leak into the secondary one.

But horse sense doesn’t work all the time. Complicated problems need a great deal of time, study and sometimes new equipment. Certain tiny parts used in watch making had been causing the makers of watches a heavy annual loss. At one point in their manufacture the parts had to be subjected to heat. No matter how much care was taken, all but a fraction of them were ruined in every trial. They would stick together, fuse into a solid mass and become worthless. The industry, both here and abroad, looked on this waste as inevitable and just added the cost to the price of each watch.

Dr. C. N. Challacombe, the Armour staff physicist, found the answer within a month. He dreamed up a novel method of heat treatment with a more satisfactory furnace-atmosphere control, and built it. The new equipment produced perfect parts in trial after trial.

“How can we reduce the amount of tin in tin cans?” manufacturers asked. The young scientists studied the subject as if it were something new under the sun, as if the conventional hot-dipping steel sheet method did not exist. The real question was, “How can steel be tin plated with the smallest amount of tin?” They came forth with electroplating by induction heating. This method saves from one-third to one-half the amount of tin used in the hot-dipping process.

The president of an office machine manufacturing company went to see the Armour men. One of his machines was too noisy. Two or more of them in the same room made a clatter like hail on a tin roof.

The staff studied the vibrations set up in the machine in relation to the shapes and sizes of its different parts. New sound-absorbing materials and a change in the design of certain parts reduced its overall noise 94 percent.

To walk through the Armour Institute is to see a miniature cross section of American industry. Open that door on the left and you’ll see rows of chocolates coming out of an embryo candy factory. Walk to the next room and you’ll see cement being made in a model rotary mixer. Up a little farther, just beyond the working flour mill, an enormous smelter melts steel with ultra-short radio waves.

Don’t open that door, unless you want to freeze in a temperature of 67 degrees below zero in the teeth of an artificial 200-mile-an-hour gale. It’s the thermal chamber, where they turn weather off and on. Just now it’s being used to duplicate stratospheric conditions for the testing of equipment. Come back next week and it may be a typical tropical day in there.

The Foundation doesn’t limit its research to solving other people’s problems. Sometimes it gets curious about how this and this would affect that and that and goes ahead and develops things in its own right.

This is how they perfected wire recording, which allows hours of music to be recorded on a small spool of wire and played over and over without wearing. Five miles of the wire used weighs only a pound, and it can be bent, twisted or even heated to high temperatures without affecting the recording. There is no comparison between this method and the clumsy record system now in use. It is superior in almost every respect.

During the years ahead, the success of our economic system depends in part on whether small companies can compete with the industrial giants. We can reach full employment only if these small companies can keep pace technologically, only if they can win and hold their business in competition with the giants. Scientific research on a fee basis—the Armour system—is the answer.