The actual Chunnel ended up taking 6 years to build, cost around $17 billion and opened in 1994. 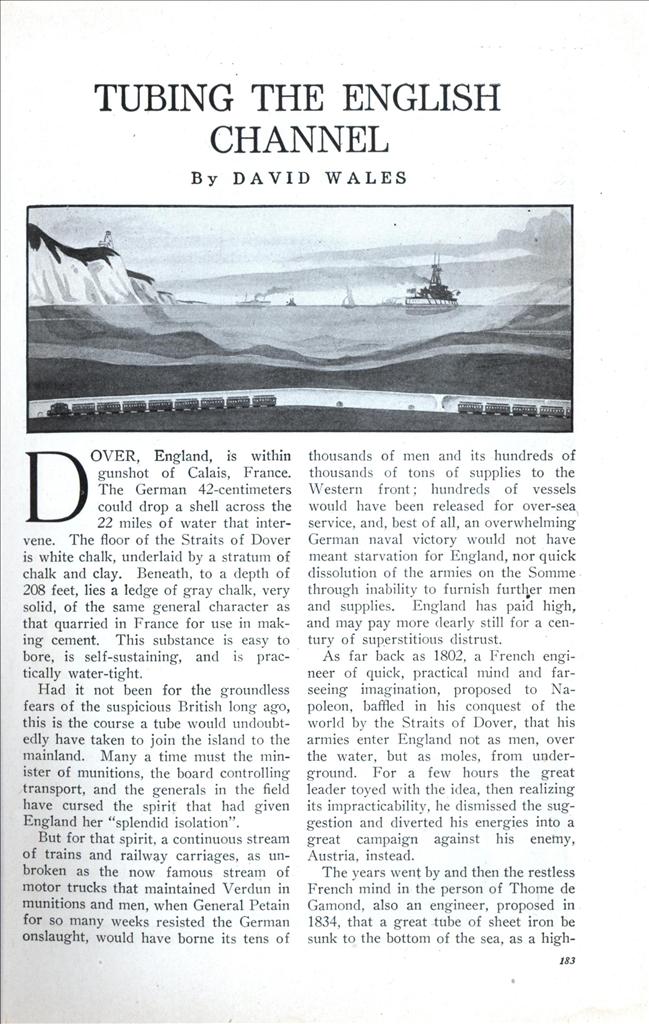 DOVER, England, is within gunshot of Calais, France. The German 42-centimeters could drop a shell across the 22 miles of water that intervene. The floor of the Straits of Dover is white chalk, underlaid by a stratum of chalk and clay. Beneath, to a depth of 208 feet, lies a ledge of gray chalk, very solid, of the same general character as that quarried in France for use in making cement. This substance is easy to bore, is self-sustaining, and is practically water-tight.

Had it not been for the groundless fears of the suspicious British long ago, this is the course a tube would undoubtedly have taken to join the island to the mainland. Many a time must the minister of munitions, the board controlling transport, and the generals in the field have cursed the spirit that had given England her “splendid isolation”.

But for that spirit, a continuous stream of trains and railway carriages, as unbroken as the now famous stream of motor trucks that maintained Verdun in munitions and men, when General Petain for so many weeks resisted the German onslaught, would have borne its tens of thousands of men and its hundreds of thousands of tons of supplies to the Western front; hundreds of vessels would have been released for over-sea service, and, best of all, an overwhelming German naval victory would not have meant starvation for England, nor quick dissolution of the armies on the Somme through inability to furnish further men and supplies. England has paid high, and may pay more dearly still for a century of superstitious distrust.

As far back as 1802, a French engineer of quick, practical mind and far-seeing imagination, proposed to Napoleon, baffled in his conquest of the world by the Straits of Dover, that his armies enter England not as men, over the water, but as moles, from underground. For a few hours the great leader toyed with the idea, then realizing its impracticability, he dismissed the suggestion and diverted his energies into a great campaign against his enemy, Austria, instead.

The years went by and then the restless French mind in the person of Thome de Gamond, also an engineer, proposed in 1834, that a great tube of sheet iron be sunk to the bottom of the sea, as a high- way for men on horseback, and men in wagons, between the two countries. As alternatives he offered a bridge to cost $80,000,000—doubtless a chimera—and the more practical idea of two riprap jetties, each five miles long, with ferry boats operating between, and a continuous causeway, broken for sea commerce, by three drawbridges.

Lastly, in 1856, the tunnel scheme was eagerly advanced by him as the real solution of quickening traffic between the two nations. The invention of the steam locomotive stimulated interest in the value of the idea.

Ten more years went by. Then in 1866 de Gamond offered an artificial island in mid-channel, with a shaft for entrance to the tube at that point. Experts pointed out the vulnerability of the island if attacked by a hostile fleet, and de Gamond then omitted this feature from his plan. By 1869 interest in the idea had so waxed that a joint Anglo-French committee was appointed seriously to consider the plan and to make a detailed report on its findings.

Efficiency experts were not altogether unknown in those days, for it was estimated that if $40,000,000 were spent to put through the project, a revenue of $10,000 would be derived over operating expenses. This, in a day when $3,000,000 per mile is expended by a railway in straightening its line and when more than this sum is appropriated for the construction of a railway station, does not seem like a huge figure.

Neither were the projectors of the enterprise scared by the cost. In both nations, companies were organized by law. It was agreed that the British corporation was to complete its half while the French were similarly engaged upon the Continental side.

The outlook for the project looked bright. Six hundred thousand dollars actually was spent in boring a tunnel from either shore.

Now, if the English and French really had been awake to the seriousness of the war, if they had started boring two years ago, the project would be over half finished. For as soon as the franchise was granted, the French company bored a tentative tunnel 6,033 feet long, seven feet in diameter. The British company sank two shafts, one 2,641 feet long; the other 6,075 feet long. Both companies have maintained these tubes in good condition, keeping them free from water by pumping. A word from the French and British Governments, and the work could be resumed at once, finished perhaps, before the conclusion of the war; it would serve as an artery to pump the last ounce of British energy into the western armies. Or, if the war were over, it would bind together the Anglo and French peoples in a bond that would cause any power to think twice before launching an attack upon either.

Because coal-burning locomotives would in a short time make such a tube— of such length, and hence so difficult to ventilate—dangerous to human life, a scheme to employ a compressed air type of locomotive was worked out. De Gamond had ingeniously attempted to make use of the tides in putting through this idea.

Today, if the tunnel were in operation, the electric locomotive would obviously provide the tractive power.

In 1906, the French, who have always been keenly desirous of seeing the tube put through, made a last appeal to the British public who had been so clamorous that in 1882 the idea had been to all intents and purposes abandoned. The fear of the English had seemed to be that the French could quickly rush an army through the tube, seize London, and, in short, make a speedy conquest of Britain. As a guarantee that they had no such motives, the French proposed to elevate a section of the approach along their coast line, so as to offer a fair target to the British fleet.

International, as well as internal politics, make rapid changes as the years fly by, and today the British would be the last to seek a bombardment of the French coast.

Meantime the French have been busily at work bringing the plans up to date. The total distance from the Paris-Calais railway to the London-Dover line is 37 miles. Of this distance 32 would be underground. In mid-channel the floor of the tunnel would rise from each side to a hump, so as to permit the drawing off of such seepage water as would be certain to find its way in. It is estimated that this seepage at no time would exceed 26,500 gallons a minute for a double tunnel. Each tunnel would be about eighteen feet in diameter. Drainage tunnels would be connected with these two traffic tunnels. According to an authoritative engineering publication, the difficulties of boring these tubes would in all likelihood not be so great as that of completing the Astoria gas tunnel under the East River in New York City. It is expected that the tunneling machines can each dig 3.7 miles per year. As it is intended to work from several points at once by making use of the drainage galleries to drive cross drifts, whence new bores may be started on the main tunnel, it is believed the entire job could be finished in five years.

The cost of such a task would be not less than $2,000,000 a mile. The French engineer, Albert Sartiaux, says it would be wise to estimate an expenditure of $77,000,000 in all. Five to seven per cent would be realized annually on this investment.