Popular Mechanics
Issue: Apr, 1924
Posted in: How to, Photography
Tags: how its made
No Comments on Turning Out Photographs by the Million (Apr, 1924)

Turning Out Photographs by the Million (Apr, 1924) 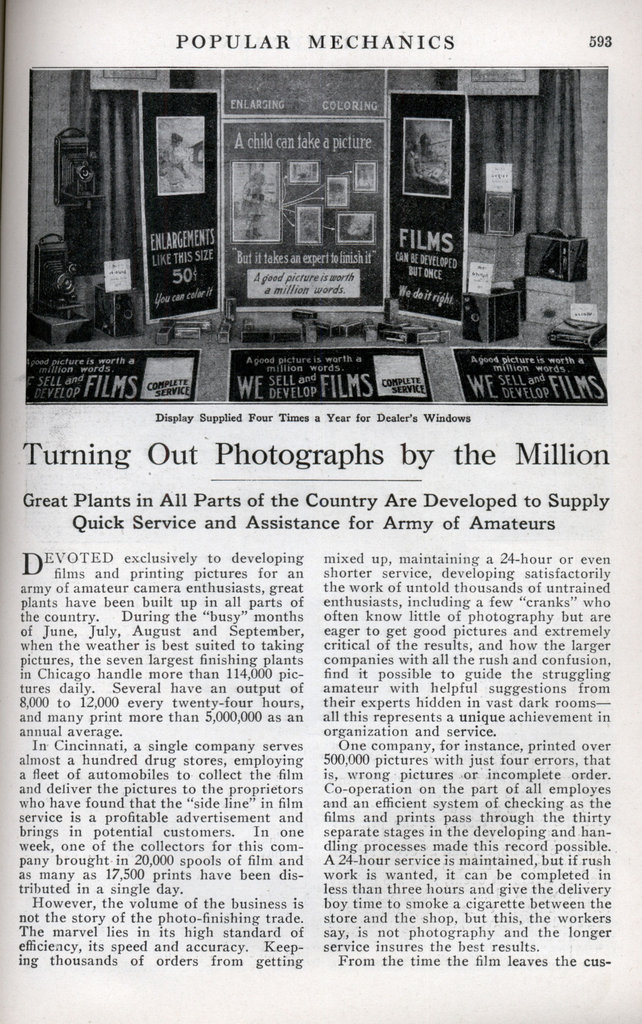 Turning Out Photographs by the Million

DEVOTED exclusively to developing films and printing pictures for an army of amateur camera enthusiasts, great plants have been built up in all parts of the country. During the “busy” months of June, July, August and September, when the weather is best suited to taking pictures, the seven largest finishing plants in Chicago handle more than 114,000 pictures daily. Several have an output of 8,000 to 12,000 every twenty-four hours, and many print more than 5,000,000 as an annual average.

In Cincinnati, a single company serves almost a hundred drug stores, employing a fleet of automobiles to collect the film and deliver the pictures to the proprietors who have found that the “side line” in film service is a profitable advertisement and brings in potential customers. In one week, one of the collectors for this company brought in 20,000 spools of film and as many as 17,500 prints have been distributed in a single day.

However, the volume of the business is not the story of the photo-finishing trade. The marvel lies in its high standard of efficiency, its speed and accuracy. Keeping thousands of orders from getting mixed up, maintaining a 24-hour or even shorter service, developing satisfactorily the work of untold thousands of untrained enthusiasts, including a few “cranks” who often know little of photography but are eager to get good pictures and extremely critical of the results, and how the larger companies with all the rush and confusion, find it possible to guide the struggling amateur with helpful suggestions from their experts hidden in vast dark roomsâ€” all this represents a unique achievement in organization and service.

One company, for instance, printed over 500,000 pictures with just four errors, that is, wrong pictures or incomplete order. Co-operation on the part of all employes and an efficient system of checking as the films and prints pass through the thirty separate stages in the developing and handling processes made this record possible. A 24-hour service is maintained, but if rush work is wanted, it can be completed in less than three hours and give the delivery boy time to smoke a cigarette between the store and the shop, but this, the workers say, is not photography and the longer service insures the best results.

From the time the film leaves the customers hand at the drug store or other place of delivery, until it is developed, the pictures printed and returned for the customer, it is guarded with hawk-like vigilance, at least seven checks being imposed for possible errors and a rigid system, tried and tested, followed to minimize errors. Description of the order, that is, the number of rolls, size, number of prints desired, kind of paper wanted and other information, is placed on the envelope by the druggist’s clerk.

At the finishing company’s plant, this envelope is given a time and order-number stamp and other identification, and the film itself is marked with the order number given the envelope which travels throughout the shop with the film it contained. As each print is made, a pencil mark on the back identifies it with the roll to which it belongs. Marginal marks are put on to assist in trimming the prints in lots of 200 or more. Rolls and prints are handled in “batches.”

At the sorters’ tables, at the printers’ lamps and at the dopers’ tanks where the prints are developed, and at every step in the process, the batches are kept separate. If errors do occur, they are quickly located within these small lots and no work is allowed to leave the inspector’s desk until every envelope again contains the film, cut, developed and printed, according to the specifications it bears.

Some companies amplify the service with helpful suggestions tabulated on the envelope opposite numbers for each print. The anxious amateur will find tucked in with the prints, “No. X would make a fine enlargement.” “Your camera leaks light.” “Try a sharper focus.” These pointers, and others coming from the recesses of the big plant, strengthen the personal touch and kindle the mutual spark of enthusiasm for good pictures. The finishing companies are just as eager to see excellent work as is the photographer. Due to the im-provements in photographic apparatus of all kinds, increased knowledge in the art and the co-operation of large organizations, amateur photography has developed to an astounding degree of excellence in the last ten years. “Some of the best photog-raphers in the United States are the amateurs,” says H. C. Corning, vice-president of the Nor-man-Willets Photo Supply Company, of Chicago. “Nowadays, less than two per cent of their work goes back as N. G.’sâ€” the blank film or that which cannot be printed. Only ten years ago, at least twenty per cent was no good.

“Here is an illustration. Last summer, a party of eight girls returned from the Yellowstone National Park with 120 exposures. They had 111 good pictures out of that number and not one of the girls had taken pictures before to any extent. Three years ago, I remember a girl came in with a bunch of forty-eight exposures and she had just one good picture of the lot. She had been working the time indicator instead of the shutter release. There used to be lots of mistakes and a much lower standard in all the work done. Now it is mostly all what even an expert would call ‘good’ and- much of it is excellent.”

Chance is still an alluring factor in picture taking, but much of the needless worry of the amateur has been removed by the efficient organizations that serve him. If his camera is not at fault, if he has operated it properly, it is almost a certainty that he will get good pictures owing to the army of trained assistants that are ready to serve him at any hour of the day or night.

With the rapidly increasing number of amateur motion-picture cameras, several developing firms have devised special equipment for making positive films of twenty and 100-foot length of “movies” of vacation scenes and other views prized by the non-professional photographer. One company in Chicago handles more than 200 reels of this kind each week.

Developing wheels, an automatic timer that regulates the amount of light each exposure is given and other apparatus adapted to intensive work of this kind have been installed. Satisfactory enlargements may be made of any exposure in the reel. Processes have also been devised for coloring the films so that the amateur will have a realistic and durable record of intimate family scenes and is saved considerable time and expense that a plant of his own would require.