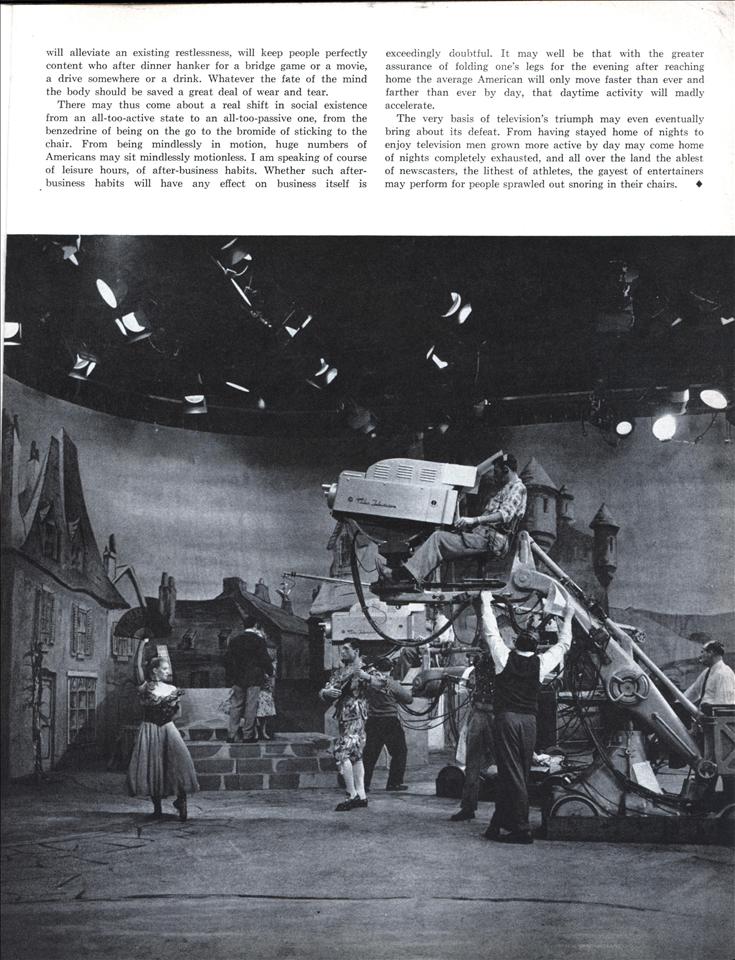 Two phenomena a half century apart have exercised the greatest influence on 20th-century Americans as social animals. The first was the arrival of the automobile which, aside from its more practical aspects, stimulated all America to move about, whether five miles to a picture show, 25 to a bathing beach, 50 for the sake of driving or 200 to call on Grandma. With the coming of the automobile there took place in the strictest sense a social revolution.

But now, a few decades after the automobile sent all America forth upon the highroad, television has appeared to keep all America at home. More and more the typical American, known to all the world as an irresistible force, is becoming an immovable object. More and more whatever siren voices beckon from afar, the TV set, like a good wife, holds one at its side. And more and more TV has more and more to offer. Everyone by now has seen Shelley or Eisenhower or Churchill perhaps even in color.

Every type of news event—coronations and inaugurations, war and UN, strikes and Un-American committees; every style of entertainment—plays and movies, operas and ball games, prize fights and tennis tournaments; every quiz rich in largess, every comedian rife with gags—but this inventory of TV is beginning to sound like a testimonial. All I meant was that the highroad from henceforth must fight a losing battle against the home.

Unhappily however television cannot be said to have re-established home life. Far more indeed than the automobile it is tending to destroy it. Where Mother and Father, Jane and John on their treks and travels exchanged pleasantries and ideas, they sit now for hours side by side, often shoulder to shoulder, scarcely exchanging a glance. Or if they do address one another they do so crossly, campaigning for this program or that.

Where friends and families once gathered with high-minded aims—to overeat and then settle back and snooze; to gossip briskly, to the ruin of a few good reputations; to glare at one another across the bridge table or hear an eight-year-old recite-now, having driven some 20 miles, one is admitted without greeting and squeezed and shushed into place. There may, though again there may not, be an interval for dining. But had there never been a fourth Earl of Sandwich television would have found it necessary to invent him.

The sad part of all this is not how much one exaggerates but how little. It would be inaccurate to contend that television has ousted all other pleasures. Gambling still flourishes, and the theater goes grumbling on; baseball and football remain though watching them on the spot is largely passe. Where a book for millions of Americans served as a last resort, a magazine as the merest time killer and the radio as something to turn on but not necessarily to listen to, television now solaces almost any social disappointment, now supersedes almost any social activity.

Never in history has there existed such an all-purpose toy for people of all ages; it has already virtually destroyed the need for newspapers, picture papers, magazines, books, plays, movies, newsreels, sports, gossip columns, speech-making; already it takes us into courtrooms and operating rooms, churches and senates; it has begun to replace the schoolroom and in time will compete with the seminar (so that a man who is wholly illiterate can be genuinely learned). Soon enough we shall be a race of shut-ins, and the poor miserable “thrust-out”—the pauper or crank who for lack of a TV set must venture forth after man or woman or God—will be a most anomalous object.

When the joking has been put aside and the prejudices allowed for, the whole problem of TV needs very sober analysis. One can hedge by repeating the obvious—that soundly produced and discreetly consumed television can have immense value, can with equal vividness inform, instruct and amuse. One can repeat the no less obvious—that at small cost in millions of homes it can brighten, broaden, freshen existence.

But in all it is and seemingly ever hopes to be, television is simply a menace to America’s cultural and social life. It is a menace just because there it sits, a constant temptation, gratification, time killer, solace. You have it, why not use it? Your book’s a wee bit boring; why not shut it and turn on TV?

It is an additional menace of course for being commercially sponsored and so not only riddled with the imbecilities of announcers but splotched with the timidities of sponsors. But it is perhaps most a menace in the sense that the better it is the worse it must be; that the more skill it exhibits, the more big news it conveys, the more big names it can boast, the more druglike must be its hold on vast numbers of people.

Thus far it has liberated a lot of potential victims simply from proving too dull, clumsy or trite to hold them. But once it has at every level something surefire to purvey, once the gags have lost their brashness and the commercials cease to jar, what competing inducement will have a chance of winning out?

As for the cultural problem TV promises to offer everything known in plays, operas, concerts and ballets, and to dramatize the contents of all sorts of books. With “$64,000 Question” carrying on like a well-heeled fairy godmother TV has a quiz show to satisfy its audiences’ gambling instincts far beyond the poor power of Las Vegas to add or detract. I don’t know that TV can lick the problem of sex, though with time it may simply extinguish the desire for any.

There is of course the question of a saturation point. Doubtless even the worst addicts will want a night off. But popular tastes being what they are, it is hard to see how an instrument with such varied charms, that keeps so abreast of the times, can possibly lose out. TV may, like telephones or cars, come to be taken for granted, but it is hard to conceive of anything that will put it on the shelf.

Doubtless it merely replaces in concentrated form a whole cluster of previous interests. But actually it doesn’t just replace them. It increases the amount and guarantees the continuity of entertainment—and without making you open your pocketbook, put on your shoes or crane your neck. And it quite does away with the tiresome “human” element, the need at times for forced conversation. On the whole, it is true, conversation in middle-class America is not only a lost art but a discarded habit. Except highball or soup spoon in hand, relatively few Americans like to have extended conversation at all; they much prefer cards, parlor games, movies, sports.

Nevertheless till the advent of TV there was a good deal of enforced or makeshift or at least intermittent conversation. People at times were foiled of a “fourth” or waiting for one to arrive; tennis courts were sometimes wet, or afternoons rainy. But now with their hand on the highball they can turn their eyes on the screen. And there is not only far less conversation when people come together; there is far less coming together. TV is a blow to social life, however inadequate social life may generally have been. And TV is equally a blow to the life of the self. It is now the camera eye and not the inward one that is the bliss of solitude.

Far more significant, far more sinister than the specific dreariness of the programs or objectionableness of the commercials are, as I have hinted, the consequences of TV’s merely existing. A new race seems destined to arise with a wholly new feeling about social relations, about the need for companions or the nature of friendship. Courtship, for a new reason, will consist almost entirely of handholding.

And people as time goes on will communicate less and less with themselves. There is thus the real problem among millions of Americans of ossified inner resources, of atrophied social responses.

The whole tenor of the machine age has been toward just this drying up within, this deadening, flattening, standardizing without. In an automobile civilization, which was one of constant motion and activity, there was almost no time to think; in a television one there is small desire. (TV, it must be very seriously said, is no mere gadget; it is one of the great milestones and possibly gravestones in the whole history of culture.) One further question does crop up: Won’t the triumph of TV, the shift from being not enough at home to being too much, sharply reduce the pace of American living? Finding escape in their own back yard, amusement in their own front room, may not men develop a Ruhfleisch they had altogether lost? May not their lives shed the old frantic hurry, the old feverish rush? Most particularly may not those who had farthest to go for their pleasures, people in the suburbs and the country, now feel small impulse to move at all?

I suspect there may be a real change in pace, a real difference in living. Not only will people remain home of nights; they will also genuinely relax. Above all, TV—while allowing actual rest— will alleviate an existing restlessness, will keep people perfectly content who after dinner hanker for a bridge game or a movie, a drive somewhere or a drink. Whatever the fate of the mind the body should be saved a great deal of wear and tear.

There may thus come about a real shift in social existence from an all-too-active state to an all-too-passive one, from the benzedrine of being on the go to the bromide of sticking to the chair. From being mindlessly in motion, huge numbers of Americans may sit mindlessly motionless. I am speaking of course of leisure hours, of after-business habits. Whether such after-business habits will have any effect on business itself is exceedingly doubtful. It may well be that with the greater assurance of folding one’s legs for the evening after reaching home the average American will only move faster than ever and farther than ever by day, that daytime activity will madly accelerate.

The very basis of television’s triumph may even eventually bring about its defeat. From having stayed home of nights to enjoy television men grown more active by day may come home of nights completely exhausted, and all over the land the ablest of newscasters, the lithest of athletes, the gayest of entertainers may perform for people sprawled out snoring in their chairs.