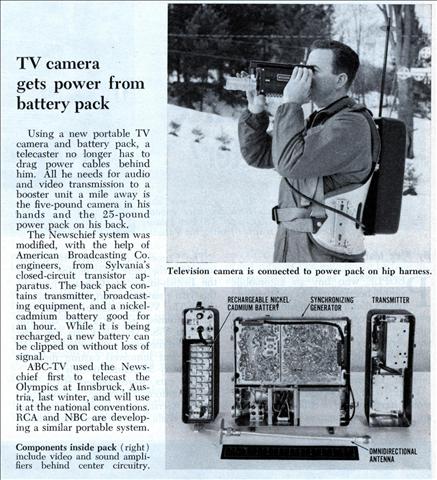 Using a new portable TV camera and battery pack, a telecaster no longer has to drag power cables behind him. All he needs for audio and video transmission to a booster unit a mile away is the five-pound camera in his hands and the 25-pound power pack on his back.

The Newschief system was modified, with the help of American Broadcasting Co. engineers, from Sylvania’s closed-circuit transistor apparatus. The back pack contains transmitter, broadcasting equipment, and a nickel-cadmium battery good for an hour. While it is being recharged, a new battery can be clipped on without loss of signal.

ABC-TV used the News-chief first to telecast the Olympics at Innsbruck, Austria, last winter, and will use it at the national conventions. RCA and NBC are developing a similar portable system.