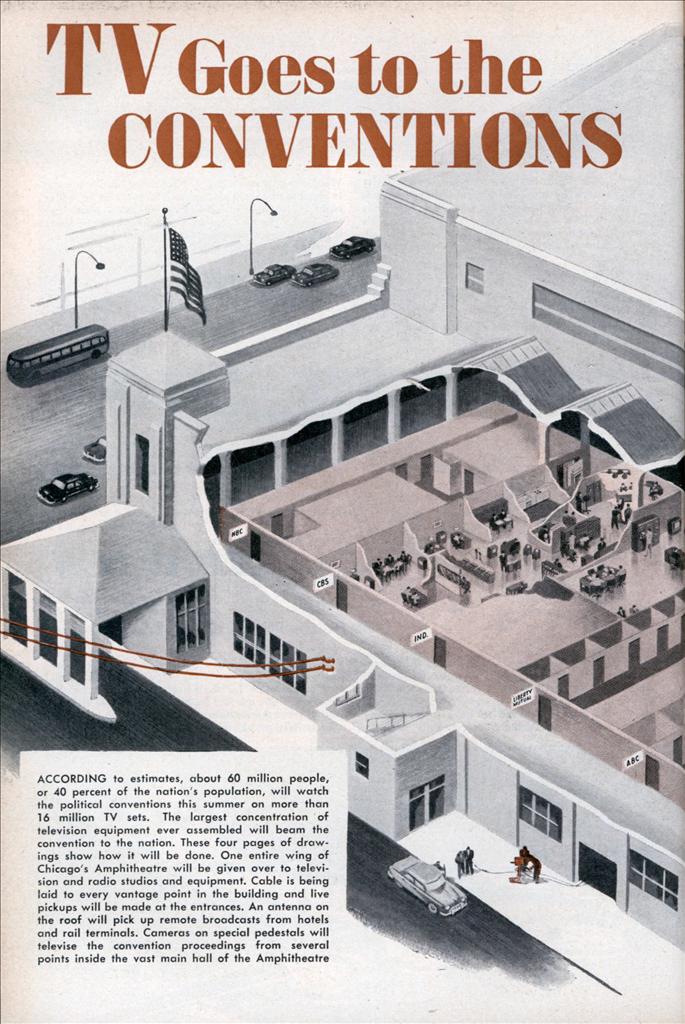 TV Goes to the CONVENTIONS

ACCORDING to estimates, about 60 million people, or 40 percent of the nation’s population, will watch the political conventions this summer on more than 16 million TV sets. The largest concentration of television equipment ever assembled will beam the convention to the nation. These four pages of drawings show how it will be done. One entire wing of Chicago’s Amphitheatre will be given over to television and radio studios and equipment. Cable is being laid to every vantage point in the building and live pickups will be made at the entrances. An antenna on the roof will pick up remote broadcasts from hotels and rail terminals. Cameras on special pedestals will televise the convention proceedings from several points inside the vast main hall of the Amphitheatre.

Big wing of the building is split into five similar sections—four for the major television networks and one to be used jointly as a TV pool which also will serve the independents. The area in white shows the floor plan for one network. The cutaway drawing shows how this section will be split into studios and control rooms. Each of the rooms with colored walls and ceilings will be soundproofed. The remaining rooms will be built with temporary partitions. Studios permit interviews and comments whenever there is a lull in the convention proceedings. Telecasts from various parts of the building and from several strategic spots in Chicago’s Loop will be funneled into the control room. There technicians will be able to choose the most interesting picture to transmit to viewers watching video screens across the nation.

In addition to the studios, other rooms in the layout will be used for film editing and storage, headquarters for TV and radio newsmen, lounges, conference rooms, a scenery room and a complete kitchen. Teletypes will bring in the latest news and reactions from other parts of the country. Although this drawing shows only one of the four network areas, the others will have similar layouts. For the first time a large segment of the American voters actually will be able to see their candidate as he is chosen in the convention.

Telecasting facilities in addition to those shown here will be used widely. Crews of technicians with mobile transmitters will be on hand, ready to rush to any spot where news is being made. NBC hopes by convention time to perfect its latest TV marvel — a miniature back-pack camera that is carried and operated by one man.