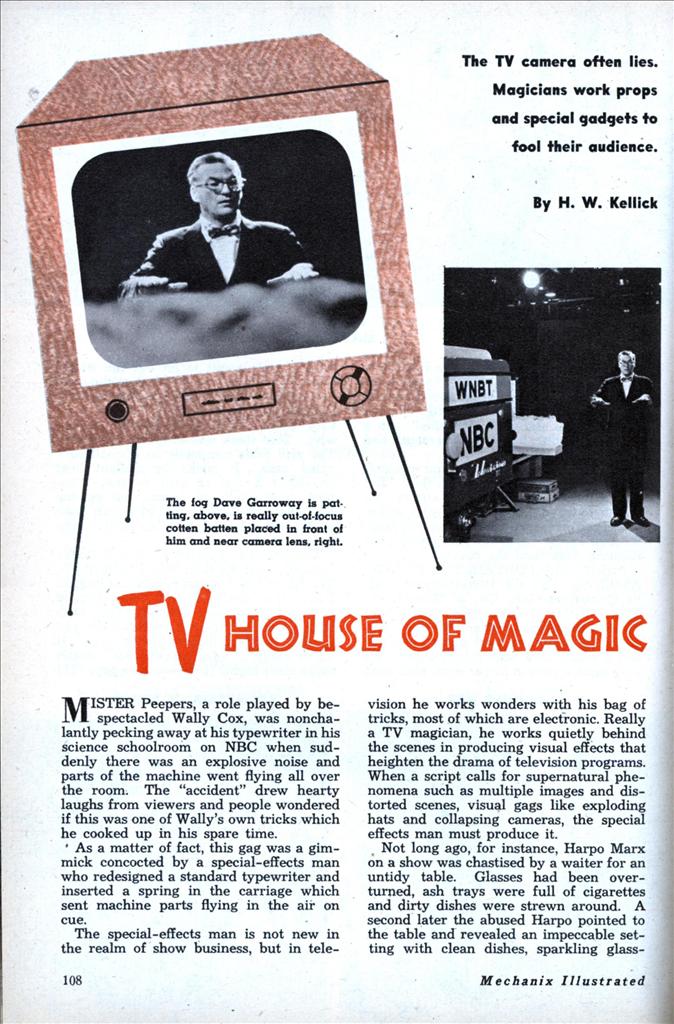 Magicians work props and special gadgets to fool their audience.

MISTER Peepers, a role played by bespectacled Wally Cox, was nonchalantly pecking away at his typewriter in his science schoolroom on NBC when suddenly there was an explosive noise and parts of the machine went flying all over the room. The “accident” drew hearty laughs from viewers and people wondered if this was one of Wally’s own tricks which he cooked up in his spare time. ‘ As a matter of fact, this gag was a gimmick concocted by a special-effects man who redesigned a standard typewriter and inserted a spring in the carriage which sent machine parts flying in the air on cue.

The special-effects man is not new in the realm of show business, but in tele- vision he works wonders with his bag of tricks, most of which are electronic. Really a TV magician, he works quietly behind the scenes in producing visual effects that heighten the drama of television programs. When a script calls for supernatural phenomena such as multiple images and distorted scenes, visual gags like exploding hats and collapsing cameras, the special effects man must produce it.

Not long ago, for instance, Harpo Marx on a show was chastised by a waiter for an untidy table. Glasses had been overturned, ash trays were full of cigarettes and dirty dishes were strewn around. A second later the abused Harpo pointed to the table and revealed an impeccable setting with clean dishes, sparkling glass- ware, filled wine bottles and a flower arrangement in the center.

Trick photography? No, sir! Once again the special effects man came to the fore with his magic. Here’s how it was done. The table was a two-sided affair, pivoted in the center, the top cut out along the pattern of the tablecloth. Glasses, dishware and silverware were fastened down. Harpo simply pushed down on one end of the tabel and the top flipped over revealing the other setting.

On another show a comedian fed nickels to a parking meter which registered a violation each time he turned his back. What the viewer didn’t see was a stagehand off-camera pulling a string releasing a pin that held down the indicating sign.

Ever wonder how Kate Smith gets the “moon over the mountain?” Gadgets and gimmicks perform the realistic effect.

When Kate Smith warbles her theme song, viewers actually are looking at a mountain scene painted on translucent plastic two .feet wide. Behind the plastic, unnoticed by the audience, a stagehand turns a crank which raises a medium-sized flashlight attached to a rod—and the moon comes over the mountain.

The special effects man, according to James Glenn of NBC Staging Services, is a gadgeteer, inventor, mechanic, scientist and man of imagination. His combination of skills applied behind the scenes is intended to fascinate the TV audience. Often he is called upon to become a television meteorologist and he must simulate such natural phenomena as rain, fog, smoke, snow and wind.

TV rain comes in three types: small, synthetic and wet. To produce the small size, a garden watering can is emptied just in front of the camera. Synthetic rain is made by a cellophane-like plastic woven into cloth. When it is attached to a drum and rapidly revolved, one camera shoots the actual scene, the other shoots the revolving plastic—and the superimposed images, oddly enough, make it rain. Wet rain is produced by a sprayer system installed above the scene to be televised. Water falls into a tank under the floor boards on which the actor stands and is re-circulated by an accoustically treated pumping unit.

Falling snow is produced several ways. A plastic spray is used in some scenes and in others confetti or powdered ice is used. Recently, experts developed a device that creates a synthetic snowfall which a viewer can’t tell from the real thing. For snow banks on window ledges, dairy salt is first piled to the desired form then lightly sprayed with water to give it a crusty, frozen look.

Close-ups of flames may look realistic to the viewer but are actually tricks conceived by special effects men. In fireplaces, for example, logs are made of stovepipes covered with plaster and asbestos. Shredded waste asbestos resting in trays under the logs is soaked with wood alcohol and ignited thus creating a controllable flame. For photographic effect the flame is colored by special chemicals.

For long shots of fires, lightweight silk or nylon gauze cut into flame shapes is attached to a diffusion chamber containing lights and a blower system. Even candle flames are simulated in this fashion with miniature mechanisms driven by flashlight batteries concealed in the candlesticks.

Another gimmick dreamed up by special effects men is the simulation of smoke. This is produced by special pellets dropped on electric hot-plates or by igniting tobacco in a tube to which is attached a hand syringe, acting as a pump. For smoky explosions, magician’s cotton or flash powder is set off by an electric charge.

NBC Staging Services department is justly proud of its fog-making machine that can be operated noiselessly within a few feet of the microphone. Mineral oil is sprayed onto a hot-plate where it is vaporized. The vapor passes through baskets of dry ice and is discharged under low pressure. The result is a hanging fog that will permit actors to walk through it. Before this development, TV fog was made with smoke candles which emitted an acrid vapor irritating to actors’ throats and it looked more like smoke than fog.

Watching Martin Kane, Private Eye, you will recall that the detective gets hit on the head at least once in each show. To put the audience in Kane’s predicament, the cameraman threw the camera in and out of focus. This was a relatively slow process.

As a result, the Flexitron, an electronic device which distorts images, was invented for the Kane show as well as other shows desiring supernatural effects. The distortion lens, when rotated, produces a dreamlike, out-of-the-world image. Prismatic lenses can turn images upside down or multiply them eight-fold.

In addition, the flexitron simulates underwater scenes, produces storms, tornadoes or the effect of an earthquake. It can also make an actor’s head pulsate. Other electronic devices can project an actor into a giant or cut him down to midget size.

Hardly a trick escapes the electronic wizardry of special effects. Recently ‘a comedian reached for a lamp post to lean upon. As he stretched out his arm to grasp it, it jumped out of his reach. On another show, chairs and tables waltzed about the stage as if they were human dancers. These stunts were not the result of trick photography. They were produced b> an electronic device called a Separatron which instantly separates picture elements. Almost any item can be made to move around in a silly fashion with this device.

Nothing seems to stump the Merlins of television. Often they surprise themselves with their results. For instance, special effects was handed a script of a mystery show in which a centipede crawls across a library floor, up the leg of a chair and then bites the hand of an actor.

For hours the effects people pondered the situation. Someone suggested that the scene be rewritten as there was little chance of producing the effect. Finally, after some fast experimentation, the boys solved the problem. A magnet was secreted underneath the rug. Then the plastic and metal centipede was drawn along by the magnet which was pulled on a wavy-line pattern by a hair-sized wire. Special pins protruding above the rug made the legs wiggle. The effect was weird, indeed, and looked life-like to the audience.

The next time there’s an unusual scene or “impossible” prop on your TV screen, remember to believe only half of what you see. The special effects men are geniuses and every day are scheming new ways to deceive you, their audience. They’re concocting new tricks and gadgets and hope you’ll agree with them that it’s fun to be fooled. •