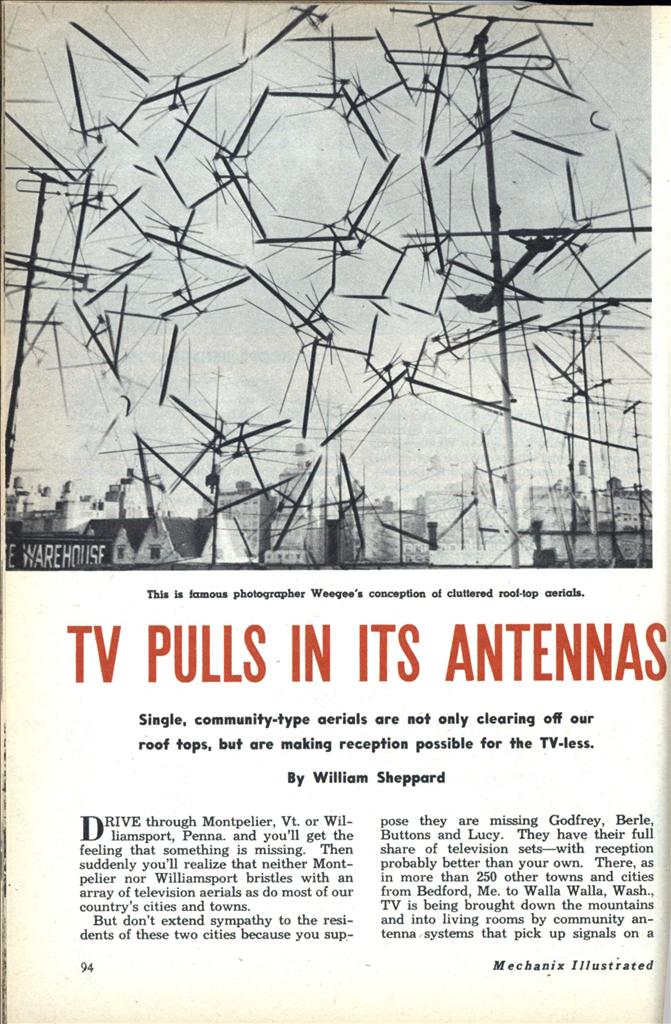 But don’t extend sympathy to the residents of these two cities because you sup- pose they are missing Godfrey, Berle, Buttons and Lucy. They have their full share of television sets—with reception probably better than your own. There, as in more than 250 other towns and cities from Bedford, Me. to Walla Walla, Wash., TV is being brought down the mountains and into living rooms by community antenna systems that pick up signals on a master antenna and relay them by cable to individual sets. Once blacked out from television pleasure by terrain or distance, these communities now are a part of modem living because of another dramatic example of American ingenuity.

To see how community TV works, let’s look at Williamsport where, in less than a year-and-a-half of operation, Williamsport-Jerrold Television Cable Company has signed up over 4,300 subscribers from the city’s 17,900 families and has become the largest system in the country.

From high-gain antennas on a 100-foot tower on top of Bald Eagle Mountain, the highest peak in the area, signals are carried six miles to town on a low-loss coaxial cable. In the residential area double shielded cable is used to prevent signal radiation and there are 124 miles of this “skeleton system.”

Clear pictures, free from “snow” and interference are obtained because special low-noise preamplifiers are installed at the antennas and sharp, extremely high Q traps are inserted to eliminate adjacent channel, FM and other types of radio frequency interference. On systems where UHF (14-83) and VHF (7-13) frequencies are picked up, they are converted to low channel (2-6) frequencies to reduce losses in the long cable.

Automatic gain control equipment smoothes out extreme variations of received signals due to fading and protects the signal levels throughout the system from atmospheric effects and power-line voltage irregularities.

High-gain, high-output reamplifiers are spaced throughout the system at regular intervals, approximately two per mile, to maintain signal levels above the noise or snow level. Bridging amplifiers (WADO units) are used to isolate all feeder lines and receivers from the main cables. Proper signal level is maintained throughout the system regardless of the number of sets connected or the order in which they are connected. Receiver isolation units, used for tap-offs to each set, isolate receivers from each other and prevent interference between sets. With a minimum of 1,000 microvolts for each channel at each receiver, the reception at each set is equal to the quality of reception at the antennas.

Indeed, reception on sets connected to a community antenna system is likely to be better than on sets in, say, Philadelphia. This is because each high-gain antenna, though perhaps 100 miles or more from the TV station, is trained directly at the station’s transmitter, whereas most rooftop antennas are all-purpose and are susceptible to “ghosts.”

Most community systems offer three channels, if that many can get their signals to the antennas. Some systems get the same channel from two different stations—as in Williamsport where channel three comes in from Binghamton, N.Y. and Philadelphia. When both of these are transmitting the same network program, Williamsport -Jerrold switches from the Binghamton-trained antenna to one that picks up Reading, Pa., a CBS outlet. Five-channel reception is a recent community TV development which will be widely adopted where five channels can be picked up.

Of course community TV costs its users money. Charges at Williamsport are typical of those made by all systems. A subscriber pays Williamsport-Jerrold $135 to get his set connected to the system and thereafter the monthly service charge is $3.78, which includes the 8 per cent tax.

Though this may seem high to people living within a few miles of television transmitters, it is classed as quite a bargain by those in the TV fringe areas where $50 is paid for a booster, $45 for a rotator and $100 to $200 or more for a tower to support the antenna. As the monthly payments to the antenna company is the top amount that has to be paid to keep TV coming to the set, subscribers are not faced with extra bills for repairing storm-damaged aerials.

Throughout the country the evidence is overwhelming that people are quite willing to pay the cost of community antenna service. Established systems are flourishing; new ones are being formed; and the Journal of Commerce refers to all this as a “growth industry.”

Perhaps the most striking individual example of the regard community TV wins for itself has to do with a young lady of Williamsport, now living alone. When she and her young man were married not so long ago, they bought—with the help of time payments—a refrigerator, a stove and a television set plus antenna service. Unfortunately, the couple quarreled and the husband moved out, leaving his wife with the appliances and their monthly payments. Soon the appliance dealer came around to repossess. He and she decided that her income would permit her to retain one of the three conveniences. So now she cooks on a hot plate and chills her food in an ice box but she is not missing her TV programs.

Much has happened to community TV since it got its start at Lansford, Pa. in the fall of 1950. Much more is expected in the future. There are now a good 200,000 sets hooked up to community systems. Industrial leader Milton J. Shapp, President of Jerrold Electronics, the Philadelphia concern which has supplied equipment to more than 80 per cent of the systems in operation, predicts that there will be 350,000 community TV subscribers by mid-’54, 1,000,000 in 1955 and from 10 to 15 million by 1960.

So far master antenna systems have made their mark in areas where reception has been either blacked out or unsatisfactory. But there is another potential market, vast and as yet untapped: householders who can get television reception now but who could get it better at little additional cost with a master antenna hookup.