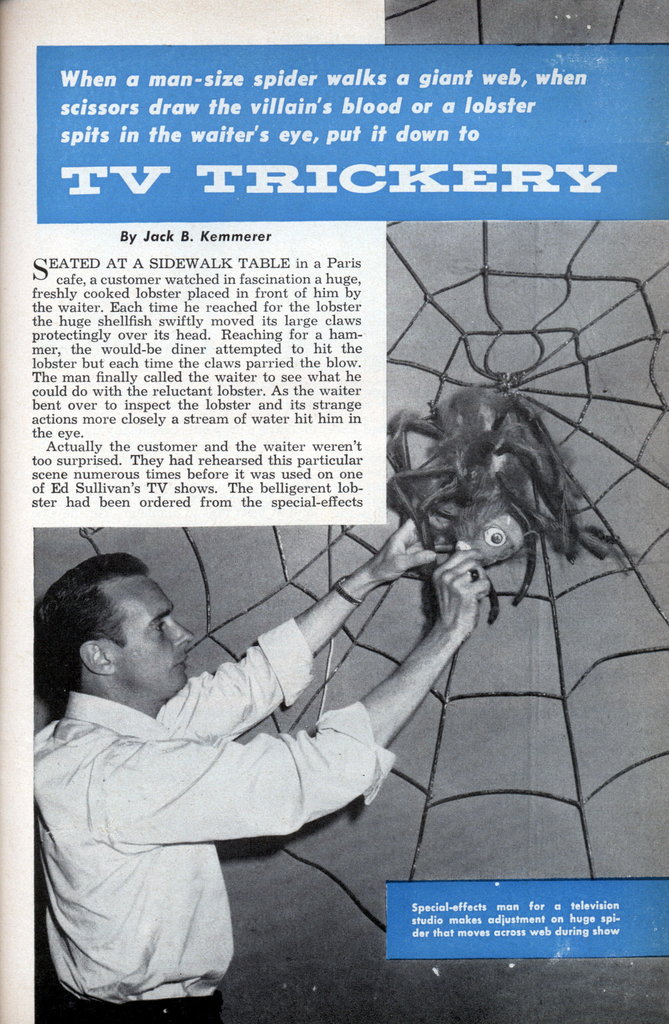 Actually the customer and the waiter weren’t too surprised. They had rehearsed this particular scene numerous times before it was used on one of Ed Sullivan’s TV shows. The belligerent lobster had been ordered from the special-effects department to do just that and it had carried out its orders to perfection.

Constructing such a lobster wasn’t too difficult a job for the special-effects gang of Columbia Broadcasting System, for they specialize in building trick sight props and their TV department in Hollywood is the largest of its kind in the country. Robert Waugh, Hollywood head of special effects for CBS, has had to produce such unusual props as spiders that crawl across webs, dragons that emit smoke and fire, crossbows that shoot tomatoes, barrels that spurt “beer” through a bullet hole, numerous false snakes, phony oil wells and anything else gag writers dream up for their clients.

On most ideas, ample time is allowed for building a prop but occasionally the writers or directors dream up a new gag on the very eve of the show. “That happened to us once,” Waugh said, “when Red Skelton’s director came in with an idea to use a huge diamond ringâ€”about nine inches tall and at least that in diameter. Yet the ring still had to be light enough in weight so that Red’s guest star, Carol Channing, could wear it on her finger.”

To do this, the special-effects team designed the ring, grabbed a chunk of balsa wood and went to work. About six hours later, the “million-carat diamond” ring was ready.

“That was an easy one,” Waugh grinned. “A sight prop we made for Playhouse 90 was a lot harder. They wanted a pair of shears that would ‘bleed’ on cue.” The shears were made from wood and painted to look exactly like any ordinary pair of shears. A plastic tip was attached to the end of the blade with a tube running from the plastic tip up through the blade to the locknut that holds the shears together. Here a small rubber ball was inserted and filled with make-believe blood. In the TV show, the actress would pick up the shears to stab the villain but he would force the shears against her cheek, cutting a long bleeding gash. Actually, the actress squeezed the bulb in the shears and the “blood” appeared to flow from her cheek. Special-effects men often are asked to make “breakaways” of different kinds. One most frequently used is glass. But the “glass” used in TV bottles and window-panes actually is a resin called PS-2. A plaster mold is made of the object and the resin is melted and poured into the mold. Temperature is important because if the resin is too cool it won’t pour properly and if it’s too hot it acquires a yellow color and doesn’t photograph properly The molded resin shatters like glass, but without the danger of cutting the TV performers.