It looks like the market was already crying out for YouTube back in 1950. I’m not sure how fans actually “collected” these slips, wardrobe malfunctions and “boners” since there was no good way to record, let alone distribute them. 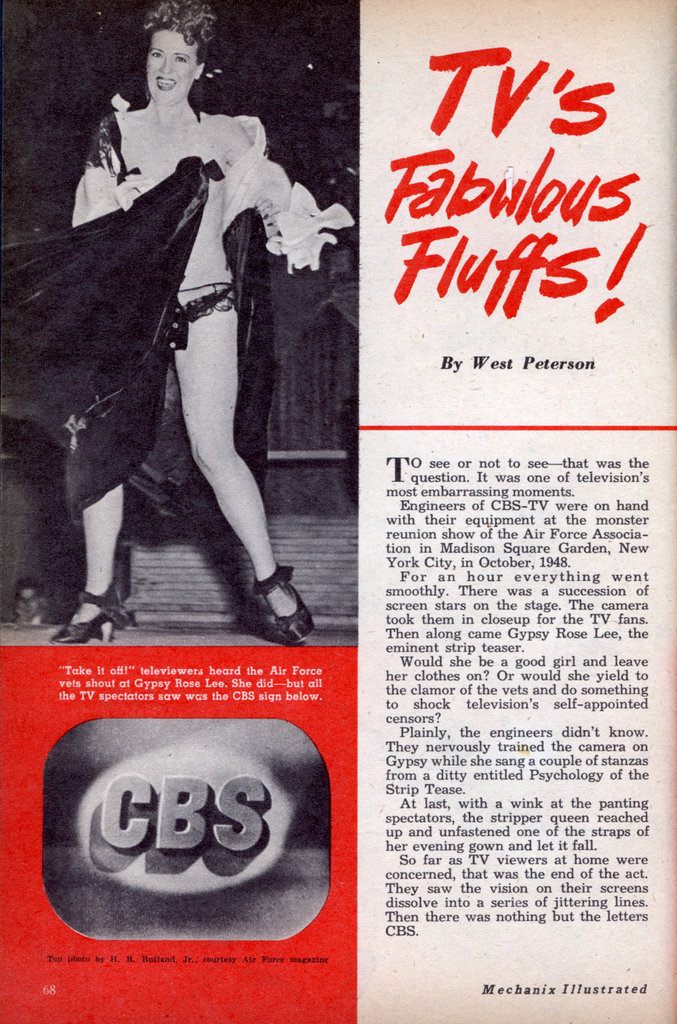 TO see or not to seeâ€”that was the question. It was one of television’s most embarrassing moments.

Engineers of CBS-TV were on hand with their equipment at the monster reunion show of the Air Force Association in Madison Square Garden, New York City, in October, 1948.

For an hour everything went smoothly. There was a succession of screen stars on the stage. The camera took them in closeup for the TV fans. Then along came Gypsy Rose Lee, the eminent strip teaser.

Would she be a good girl and leave her clothes on? Or would she yield to the clamor of the vets and do something to shock television’s self-appointed censors?

Plainly, the engineers didn’t know. They nervously trained the camera on Gypsy while she sang a couple of stanzas from a ditty entitled Psychology of the Strip Tease.

At last, with a wink at the panting spectators, the stripper queen reached up and unfastened one of the straps of her evening gown and let it fall.

So far as TV viewers at home were concerned, that was the end of the act. They saw the vision on their screens dissolve into a series of jittering lines. Then there was nothing but the letters CBS.

In the meantime, however, the mike was still operating and the disappointed TV owners could hear lusty shouts:

When Gypsy’s performance was over, the camera swung back into action and presented the remainder of the show.

Pressed for an explanation next day, Columbia officials muttered something about a “blown fuse.” It was a mere coincidence, they said, that the technical difficulty cropped up just as Gypsy was giving the boys what they wanted. To which cynical viewers responded:

“Oh, yeah?” Since TVâ€”the big, brawling infant of the entertainment industryâ€”happens to be a child that is not only heard but also seen, its fabulous “fluffs” or boners are twice as mortifying as the mistakes made on radio.

There’s double the opportunity for embarrassing moments, too. TV cameras can take in too much territory, pick up the wrong people, detect the unbuttoned button, penetrate diaphanous gowns, make smooth-shaven gents look like bearded bumsâ€”and in general play all sorts of unpredictable tricks.

After talking with producers, directors and announcersâ€”and with plain John Q. Viewerâ€”you realize that the collecting of amusing television fluffs has become a new indoor sport.

This is not to disparage TV. The infant is rapidly coming of age, and errors aren’t nearly as prevalent as they were in the past. The surprising thing, in fact, is that the fanciers of boners don’t have many, many more in their collections!

Not long ago on the CBS program Missus Goes A-Shopping a duck named Pierre was a “supporting player.” He wandered about the stage while the human performers went through their paces.

Pierre made half a dozen appearances before the cameras and mikes with ‘nary a mishap. He was getting to be a real ham. Then an “accident” happened! The duck’s protest against modern plumbing facilities proved quite shocking to others in the cast. John Reed King, major-domo of the program, called “Fowl!” And that put an abrupt ending to Pierre’s career.

At that, Pierre probably wasn’t as nonplussed as was Sid Caesar, the comedian, on the NBC program Admiral Broadway Revue. Caesar went to open the door of his sponsor’s refrigerator to reveal its interior marvelsâ€”and the danged door insisted on remaining tightly closed!

The same thing happened to Henry Morgan on one of his early shows, but in reverse. After an appropriate buildup this funnyman began demonstrating how easily you could open the refrigerator advertised on his program. The door not only swung freelyâ€”it dropped right off the hinges!

Knowing Morgan, many viewers figured it was a gag. What the sponsor thought is not recorded.

Commercials often cause fluffs, too. Between rounds in a fight telecast sponsored by Gillette Razor, the announcer gave a big spiel on how it was child’s play to insert a new blade.

“A simple twist of the handle, the razor opens, you insert the blade. Another twist and presto! You’re ready for a clean, delightful shave!”

But the particular razor used by the announcer for his demonstration was faulty. Twisting the handle with all his might after putting in the blade, he couldn’t get the thing to close. He banged it on a table and still it wouldn’t function. Finally the flustered announcer had to abandon the attempt and go back to describing the fight.

Comic Arthur Godfrey had as a guest on one of his programs the late Bill Odom, round-the-world flier. “Have a Chesterfield,” said Godfrey, extending a pack. ‘Thanks,” Odom replied, “but I never smoke.” Recently Godfrey was previewing General Motors’ 1950 auto show in New York before the TV cameras with Harry Klingler, Pontiac’s general manager. Klingler pressed a button on the automatic window of the new Pontiac hardtop convertible. The window quickly slid down. He pressed a button againâ€”but the window stayed downâ€”stuck fast. “Better get that fixed before the big show opens tomorrow,” Godfrey cracked before the camera could shift from the embarrassed GM executive.

On We the People a can of Gulf oil was frozen inside a block of ice. The idea, of course, was to show how the oil would flow under the most frigid conditions. Came time for the commercial. The can was broken out of the ice and a hole was punched in it. The announcer up-ended the ice-cold can. But the oil definitely did not come running out!

Clothes can be a headache on television. One veteran director recalls a show he handled several years ago on which a well-proportioned singer appeared. The upper part of her gown was of a diaphanous material. That was OK under ordinary lights. But under the powerful spots needed for TV at that time, the stuff was just about invisible.

Raymond Nelson, who staged Fashions on Parade for Dumont, has discovered along with other TV workers that you must take care with color.

“Gowns of a certain shade of red positively make a woman appear undressed,” he says. For the same reason, negligees, foundation garments and nightgowns must be avoided.

During the early days of television a leading lady in Romeo and Juliet was detected tugging at her girdle. This, of course, was an accidental pickup. The camera should have been pointed at the action taking place on another part of the stage.

More recently a similar mishap involved the ventriloquist Paul Winchell in the show which features him with Joseph Dunninger, the mind-reading wizard. A stagehand pulled the curtain back a little too far and the camera showed Winchell in the midst of making a costume change. He was very nearly caught literally with his pants down.

During a sports telecast the announcer went through a great part of a basketball game calling one side “City College.” The players actually were from New York University, and viewers could plainly see the NYU in large letters on their jerseys.

In “pan” shots of crowds, announcers have learned from bitter experience to avoid saying, “And there’s good old Gus Whoozis and his charming wife.”

It might not be Gus’ legal spouse at all. And if the real Mrs. Whoozis is watching the telecast at home there’s hell to pay!

Then there was the time that cutup “King of Television,” Milton Berle, came within an inch of being “berled” like a lobster.

A Make Mine Manhattan skit called for Berle to walk into a store, select a ball-point pen and subject it to every possible test prior to purchasing it. One of the tests, of course, was writing with the pen under water.

A tank was erected on the stage, its sides extending up close to the lights. Some time before the telecast was scheduled to begin it was filled with water. The idea was that Berle was to immerse himself, together with the wonderful pen.

Quite accidentally the comedian’s manager came by and casually thrust his hand into the water. It almost scalded him. Under the lights the water had heated up until it was practically boiling. For Berle things had nearly reached a real “Berle-ing” point.

As TV marches on mishaps such as these will become more infrequent. Nor will there be as many mistakes in the control room like the one that embarrassed Announcer John Tillman, in Station WPIX’s New York television studio.

It was a couple of minutes before Tillman’s scheduled news summary, and he was seated at a desk going over his notes. Meanwhile the station was running off a short titled Film Museum, showing old movie favorites.

“And now,” Jimmy Fidler, the narrator, paused dramatically, “we reach into our Hollywood picture morgue and bring you one of the greatest performers of film historyâ€” that grand old lady of the silver screen who will never be forgottenâ€”the late Marie Dressier!”

In the control room an engineer punched the wrong button. Instead of the actress, viewers saw Tillman reading his notes, scratching his head, tugging at his necktie.

“That happened several months ago,” Tillman says, “but I haven’t lived that Dressier fluff down yet. People are still calling me Marie.”