Very interesting article about how film and photographic paper is made:

“The story behind the actual film-making begins in a huge vault where five tons of bar silver â€”a week’s supply of the precious metalâ€” may be stored for almost immediate consumption.” 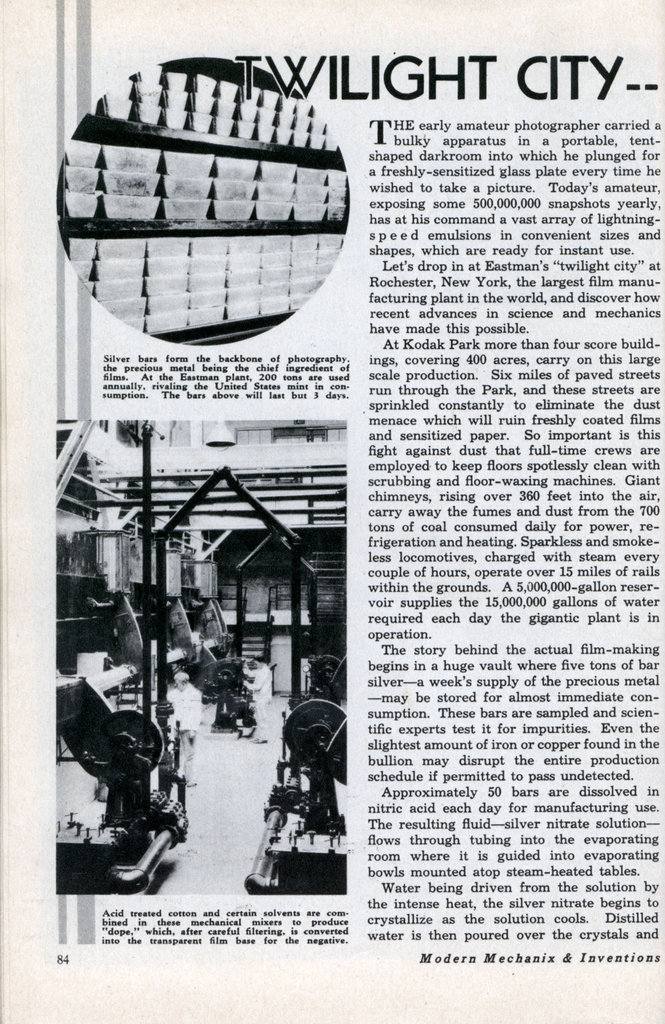 TWILIGHT CITY — Where Snapshots are Born

“It’s easy to take a snapshot,” as 500,000,000 pictures a year will testify. But behind the click of the lens there lies a story of high speed chemistry fascinating in its scope.

The early amateur photographer carried a bulky apparatus in a portable, tent-shaped darkroom into which he plunged for a freshly-sensitized glass plate every time he wished to take a picture. Today’s amateur, exposing some 500,000,000 snapshots yearly, has at his command a vast array of lightning-speed emulsions in convenient sizes and shapes, which are ready for instant use.

Let’s drop in at Eastman’s “twilight city” at Rochester, New York, the largest film manufacturing plant in the world, and discover how recent advances in science and mechanics have made this possible.

At Kodak Park more than four score buildings, covering 400 acres, carry on this large scale production. Six miles of paved streets run through the Park, and these streets are sprinkled constantly to eliminate the dust menace which will ruin freshly coated films and sensitized paper. So important is this fight against dust that full-time crews are employed to keep floors spotlessly clean with scrubbing and floor-waxing machines. Giant chimneys, rising over 360 feet into the air, carry away the fumes and dust from the 700 tons of coal consumed daily for power, refrigeration and heating. Sparkless and smokeless locomotives, charged with steam every couple of hours, operate over 15 miles of rails within the grounds. A 5,000,000-gallon reservoir supplies the 15,000,000 gallons of water required each day the gigantic plant is in operation.

The story behind the actual film-making begins in a huge vault where five tons of bar silver â€”a week’s supply of the precious metalâ€” may be stored for almost immediate consumption. These bars are sampled and scientific experts test it for impurities. Even the slightest amount of iron or copper found in the bullion may disrupt the entire production schedule if permitted to pass undetected.

Approximately 50 bars are dissolved in nitric acid each day for manufacturing use. The resulting fluidâ€”silver nitrate solutionâ€” flows through tubing into the evaporating room where it is guided into evaporating bowls mounted atop steam-heated tables.

Water being driven from the solution by the intense heat, the silver nitrate begins to crystallize as the solution cools. Distilled water is then poured over the crystals and evaporation is repeated until all impurities are removed. The brittle, flaky crystals are next subjected to drying processes.

The cotton fields contribute their share in the manufacture of the film support or “base,” for cotton treated with nitric and sulphuric acid until it becomes soluble in solvents such as wood alcohol is an important ingredient. About 80 tons of cotton are used a week in the manufacture of film base.

After samples are tested, the cotton is weighed and then dumped into the nitrating machines. To prevent possible contact with metal, the nitrated cotton, immersed in water, must pass only through tile pipes. After every trace of acid is removed by thorough washing, the nitrated cotton is dissolved in proper solvents in large mechanical mixers. Finally, the fluid is forced through filter presses.

This syrup-like “dope” is fed onto the highly polished rim surface of enormous wheels in a battery of glass-enclosed machines. Heated air drives off the solvents as the thin transparent layer travels through the machine. Cellulose nitrate is finally reeled off like newsprint paper in flawless, endless sheets. Workmen watch the entire process through the strong plate glass windows. These complicated machines, almost human in operation, run continuously, day after day, without stopping.