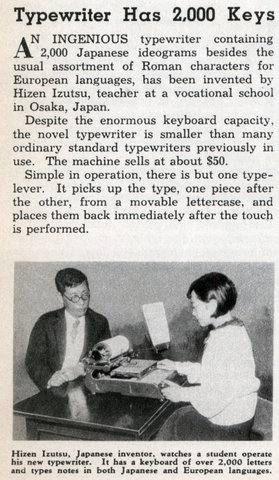 AN INGENIOUS typewriter containing 2,000 Japanese ideograms besides the usual assortment of Roman characters for European languages, has been invented by Hizen Izutsu, teacher at a vocational school in Osaka, Japan.

Despite the enormous keyboard capacity, the novel typewriter is smaller than many ordinary standard typewriters previously in use. The machine sells at about $50.

Simple in operation, there is but one type-lever. It picks up the type, one piece after the other, from a movable lettercase, and places them back immediately after the touch is performed.