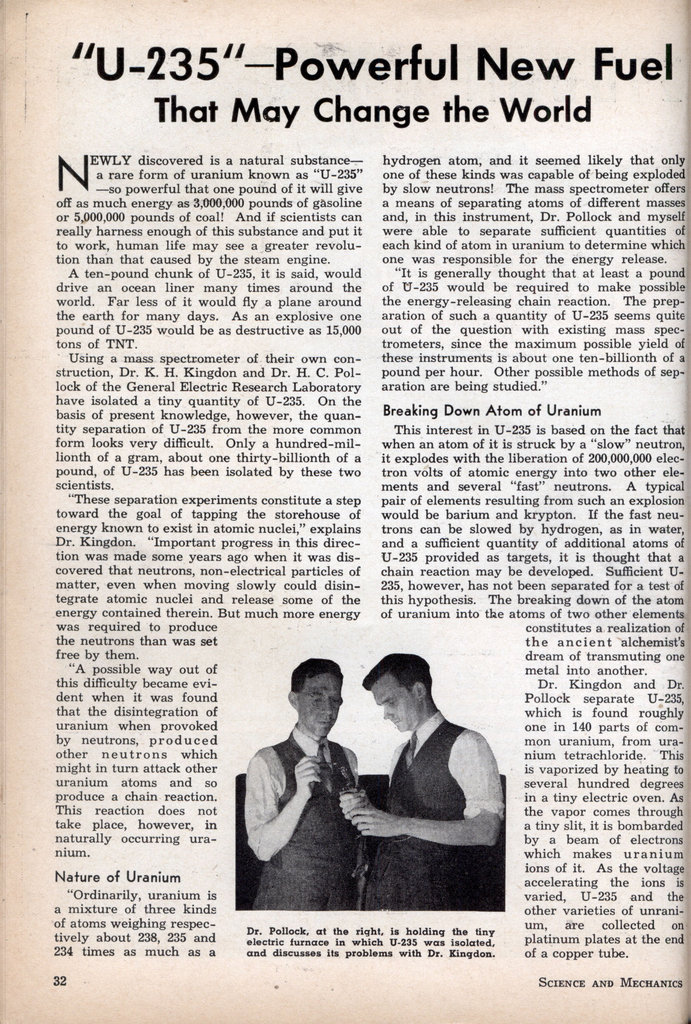 That May Change the World

NEWLY discovered is a natural substanceâ€” a rare form of uranium known as “U-235” â€”so powerful that one pound of it will give off as much energy as 3,000,000 pounds of gasoline or 5,000,000 pounds of coal! And if scientists can really harness enough of this substance and put it to work, human life may see a greater revolution than that caused by the steam engine.

A ten-pound chunk of U-235, it is said, would drive an ocean liner many times around the world. Far less of it would fly a plane around the earth for many days. As an explosive one pound of U-235 would be as destructive as 15,000 tons of TNT.

Using a mass spectrometer of their own construction, Dr. K. H. Kingdon and Dr. H. C. Pollock of the General Electric Research Laboratory have isolated a tiny quantity of U-235. On the basis of present knowledge, however, the quantity separation of U-235 from the more common form looks very difficult. Only a hundred-millionth of a gram, about one thirty-billionth of a pound, of U-235 has been isolated by these two scientists.

“These separation experiments constitute a step toward the goal of tapping the storehouse of energy known to exist in atomic nuclei,” explains Dr. Kingdon. “Important progress in this direction was made some years ago when it was discovered that neutrons, non-electrical particles of matter, even when moving slowly could disintegrate atomic nuclei and release some of the energy contained therein. But much more energy was required to produce the neutrons than was set free by them.

“A possible way out of this difficulty became evident when it was found that the disintegration of uranium when provoked by neutrons, produced other neutrons which might in turn attack other uranium atoms and so produce a chain reaction. This reaction does not take place, however, in naturally occurring uranium.

“Ordinarily, uranium is a mixture of three kinds of atoms weighing respectively about 238, 235 and 234 times as much as a hydrogen atom, and it seemed likely that only one of these kinds was capable of being exploded by slow neutrons! The mass spectrometer offers a means of separating atoms of different masses and, in this instrument, Dr. Pollock and myself were able to separate sufficient quantities of each kind of atom in uranium to determine which one was responsible for the energy release.

“It is generally thought that at least a pound of U-235 would be required to make possible the energy-releasing chain reaction. The preparation of such a quantity of U-235 seems quite out of the question with existing mass spectrometers, since the maximum possible yield of these instruments is about one ten-billionth of a pound per hour. Other possible methods of separation are being studied.”

Breaking Down Atom of Uranium

This interest in U-235 is based on the fact that when an atom of it is struck by a “slow” neutron, it explodes with the liberation of 200,000,000 electron volts of atomic energy into two other elements and several “fast” neutrons. A typical pair of elements resulting from such an explosion would be barium and krypton. If the fast neutrons can be slowed by hydrogen, as in water, and a sufficient quantity of additional atoms of U-235 provided as targets, it is thought that a chain reaction may be developed. Sufficient U-235, however, has not been separated for a test of this hypothesis. The breaking down of the atom of uranium into the atoms of two other elements

constitutes a realization of the ancient alchemist’s dream of transmuting one metal into another.

Dr. Kingdon and Dr. Pollock separate U-235, which is found roughly one in 140 parts of common uranium, from uranium tetrachloride. This is vaporized by heating to several hundred degrees in a tiny electric oven. As the vapor comes through a tiny slit, it is bombarded by a beam of electrons which makes uranium ions of it. As the voltage accelerating the ions is varied, U-235 and the other varieties of unranium, are collected on platinum plates at the end of a copper tube.