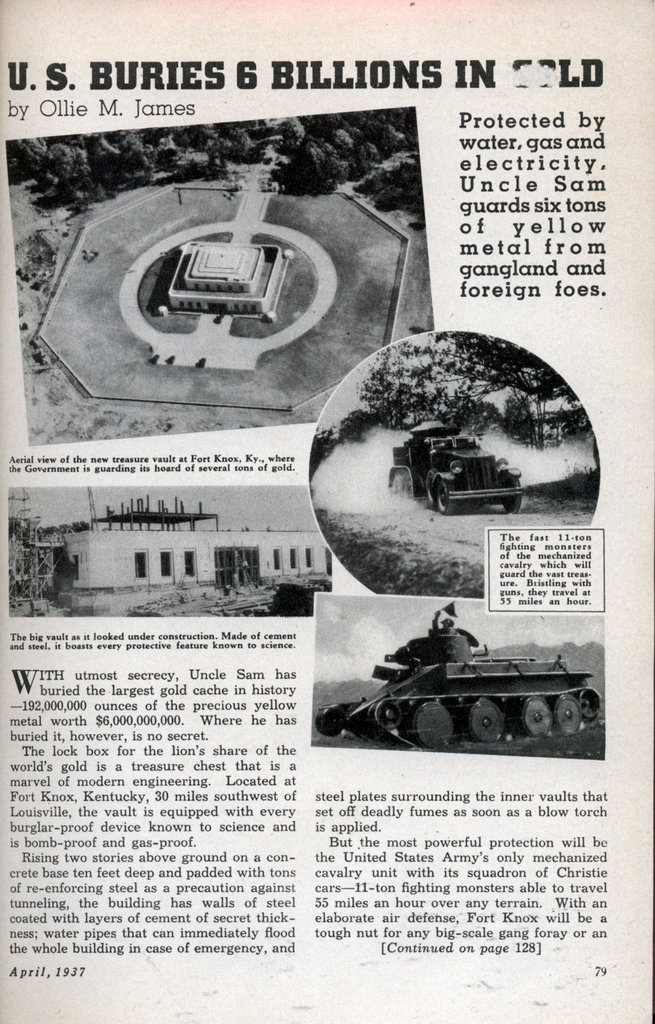 Protected by water, gas and electricity.

The lock box for the lion’s share of the world’s gold is a treasure chest that is a marvel of modern engineering. Located at Fort Knox, Kentucky, 30 miles southwest of Louisville, the vault is equipped with every burglar-proof device known to science and is bomb-proof and gas-proof.

Rising two stories above ground on a concrete base ten feet deep and padded with tons of re-enforcing steel as a precaution against tunneling, the building has walls of steel coated with layers of cement of secret thickness; water pipes that can immediately flood the whole building in case of emergency, and steel plates surrounding the inner vaults that set off deadly fumes as soon as a blow torch is applied.

But the most powerful protection will be the United States Army’s only mechanized cavalry unit with its squadron of Christie cars—11-ton fighting monsters able to travel 55 miles an hour over any terrain. With an elaborate air defense, Fort Knox will be a tough nut for any big-scale gang foray or an invading foe to crack. Treasury officials point out that, even if the gold was reached, its removal would be a tremendous task. Provided that an invading force could: successfully fight its way ‘through the Appalachians, reach the treasure house and rifle its vaults, it would take an army of 120,000 men, each packing 100 pounds of gold, to remove the 5,714 tons of metal.

Although constructed in the most modern manner, there is a touch of the medieval in the two water-filled moats that encircle the strong box. In addition, the whole is surrounded by an electrified ten-foot steel fence, guarded by sentries 24 hours a day. Concrete pill-boxes, bristling with machine guns, are set at each corner of the building, and a dome on top of the treasure house contains more machine guns as well as powerful searchlights.

Transfer of the gold from unsafe coastal depositories to Fort Knox was no simple matter. Fifty armored trains, each with more than 100 soldiers aboard—with thousands more strung along the route, aided by secret service men and police—moved the nearly six tons of gold from New York, Philadelphia and other cities.

The new fortress-vault at Fort Knox cost $468,000 to build, including the cost of 660 tons of re-enforcing steel and 600 tons of structural steel. Even plus the $100,000 mailing expense, Uncle Sam figures he is getting off cheap.