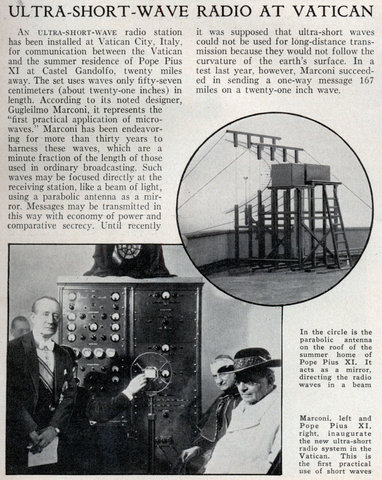 An ultra-short-wave radio station has been installed at Vatican City, Italy, for communication between the Vatican and the summer residence of Pope Pius XI at Castel Gandolfo, twenty miles away. The set uses waves only fifty-seven centimeters (about twenty-one inches) in length. According to its noted designer, Gugleilmo Marconi, it represents the ”first practical application of microwaves.” Marconi has been endeavoring for more than thirty years to harness these waves, which are a minute fraction of the length of those used in ordinary broadcasting. Such waves may be focused directly at the receiving station, like a beam of light, using a parabolic antenna as a mirror. Messages may be transmitted in this way with economy of power and comparative secrecy. Until recently it was supposed that ultra-short waves could not be used for long-distance transmission because they would not follow the curvature of the earth’s surface. In a test last year, however, Marconi succeeded in sending a one-way message 167 miles on a twenty-one inch wave.