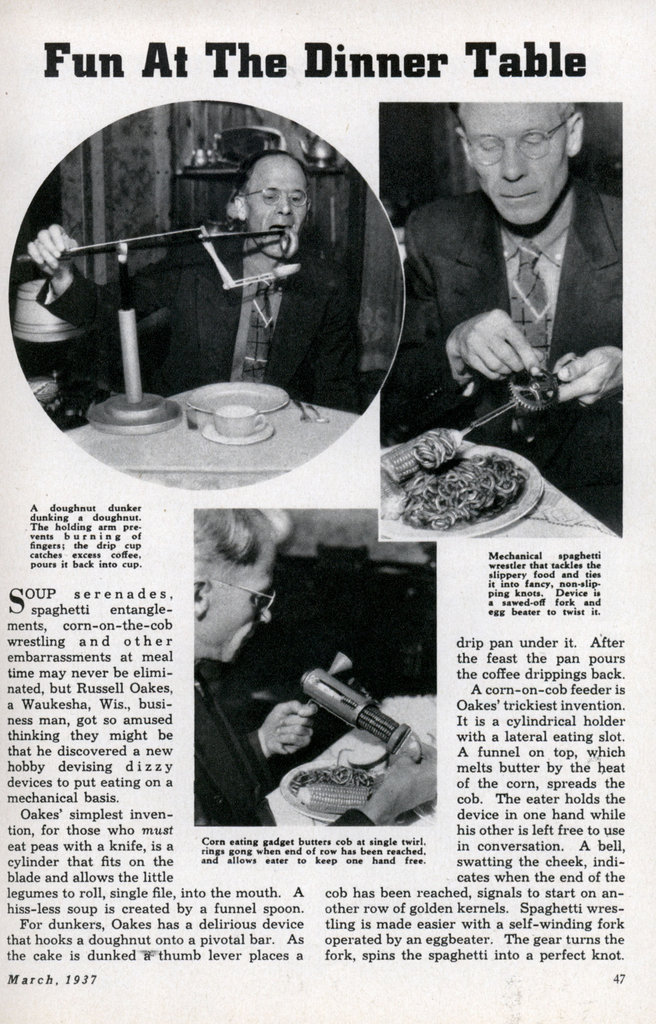 Fun At The Dinner Table
SOUP serenades, spaghetti entanglements, corn-on-the-cob wrestling and other embarrassments at meal time may never be eliminated, but Russell Oakes, a Waukesha, Wis., business man, got so amused thinking they might be that he discovered a new hobby devising dizzy devices to put eating on a mechanical basis.

Oakes’ simplest invention, for those who must eat peas with a knife, is a cylinder that fits on the blade and allows the little legumes to roll, single file, into the mouth. A hiss-less soup is created by a funnel spoon. For dunkers, Oakes has a delirious device that hooks a doughnut onto a pivotal bar. As the cake is dunked a thumb lever places a drip pan under it. After the feast the pan pours the coffee drippings back. A corn-on-cob feeder is Oakes’ trickiest invention. It is a cylindrical holder with a lateral eating slot. A funnel on top, which melts butter by the heat of the corn, spreads the cob. The eater holds the device in one hand while his other is left free to use in conversation. A bell, swatting the cheek, indicates when the end of the cob has been reached, signals to start on another row of golden kernels. Spaghetti wrestling is made easier with a self-winding fork operated by an eggbeater. The gear turns the fork, spins the spaghetti into a perfect knot.