Unclaimed Fortunes Under The Sea (Jan, 1950) 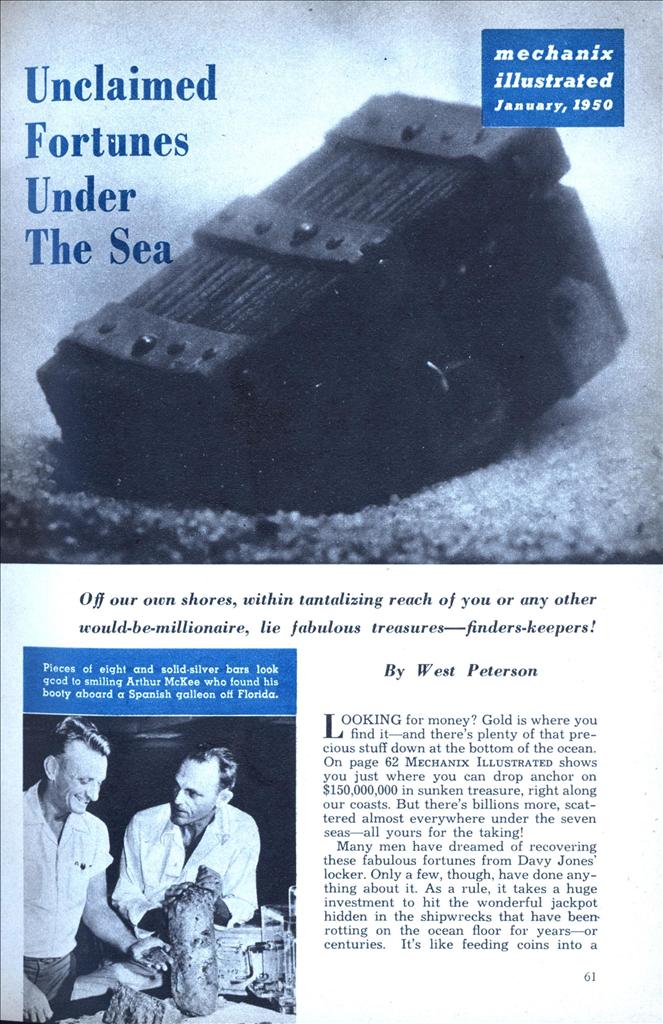 Unclaimed Fortunes Under The Sea

Off our own shores, within tantalizing reach of you or any other would-be-millionaire, lie fabulous treasures—finders-keepers!

LOOKING for money? Gold is where you I find it—and there’s plenty of that precious stuff down at the bottom of the ocean. On page 62 Mechanix Illustrated shows you just where you can drop anchor on $150,000,000 in sunken treasure, right along our coasts. But there’s billions more, scattered almost everywhere under the seven seas—all yours for the taking!

Many men have dreamed of recovering these fabulous fortunes from Davy Jones’ locker. Only a few, though, have done anything about it. As a rule, it takes a huge investment to hit the wonderful jackpot hidden in the shipwrecks that have been rotting on the ocean floor for years—or centuries. It’s like feeding coins into a slot machine rigged in favor of the house.

Simon Lake, so-called father of the modern submarine, tried the gamble on a big scale with his own specially designed “Submarine Salvager” for recovering underwater wealth—and died broke.

At Point Pleasant, N. J., a couple of World War II veterans—Floyd (Bud) Sharp, 31, and William Conway, 25—are taking up where Lake left off. There’s one difference, though. The boys have no fancy equipment; they’re doing all their fortune-fishing on a shoestring.

Bud Sharp is the diver and the moving genius in the outfit. The wreck he’s exploring at a 68-foot depth is that of the Old Clyde Line steamer Delaware, which sank three miles off Point Pleasant in July, 1898.

Although the Delaware carried $250,000 in gold bullion—worth $420,000 at today’s prices—maritime records indicate nobody tried to salvage any of this great booty until Lake came along in 1936 with his elaborate Salvager. For a variety of reasons his expensive attempts to retrieve that fortune failed.

Raising even shoestring capital took time. So did the research to determine the exact location of the wreck, conditions on the bottom and the probable value of the cargo. Bud was so sure he could dredge up that gold, though, he hocked his car to help get ready cash for salvage gear. By the spring of 1949 they were pretty well set. The boys borrowed an ancient, 37-foot fishing trawler in return for a 15 per cent interest in the venture. Actual operations began about the first of June.

On his very first dive Sharp hit the ocean floor near a large metal box, apparently a safe—half buried in the sand. Conway, tending the lines topside got so excited at the good news he almost fell off the boat.

Unfortunately the winch wasn’t yet rigged for heavy duty and the safe couldn’t be hoisted to the surface. Sharp tried to break inside. But his diving time was up before he could succeed.

The treasure hunters hastened to equip the boat with a winch that could lift a one-ton load off the ocean floor. Sharp then made dogged attempts to locate the mysterious box again on subsequent trips. Up to this writing he has failed. Such are the heartbreaks of hunting for sunken gold.

So far, Conway and Sharp have recovered only some barnacle-encrusted, cut- glass dishes, a few trinkets and some bronze, which they sold to a junk dealer— but no gold bullion.

“We don’t give up easy—-we’ll keep trying,” says Sharp. “And some day, even if it’s a year or two years from now, we’re bound to hit the jackpot!”

The hazards and difficulties encountered in the Delaware operation are typical of the headaches suffered by all underwater treasure-hunters.

In the first place, weather can be a bugaboo. Too much wind rules out diving. A choppy surface could shift the boat and part the fines. Wind also stirs up currents, which cut underwater visibility—a serious problem.

You seldom get more than three good diving days a week during the sunken-gold “season”—May through September. In other months the weather is less predictable, the illumination on the bottom is practically nil, and the water is too cold for extended diving.

On the bottom, even under ideal conditions, Sharp finds that visibility is never more than five feet. In murky waters you may find it much nearer to zero. Your underwater limit for any one day will run between two and three hours. You’ll be lucky then if you can really cover a 20-foot radius. Movement is extremely difficult. Not only will you find yourself groping almost blindly about that dim world under the sea but the weighted boots and the blocks of lead attached to your belt make turning or bending hazardous and a stum- The Delaware’s gold bullion, of course, is but a minute fraction of the wealth that lies submerged in wrecked ships up and down both coasts of the United States and in many other parts of the globe.

There was the Ward Liner Merida, for example, which sank after a collision 55 miles off Cape Charles, Va., in 1911. She reportedly carried tons of silver bullion, millions of dollars worth of gold belonging to the family of an ousted Mexican president, and caskets crammed with jewels. Researchers claim the Merida’s treasure is more than $4,000,000 and might easily touch $5,000,000.

An effort to salvage the valuables from the Merida failed because the wreck lay too deep. With new improvements in underwater technique, another salvage attempt could be a success. This wouldn’t be a – “shoestring” recovery operation, however.

Over the centuries treasure hunters have spent more money on the wreck of the British frigate Hussar than on any other ill-starred ship of fortune. In 1780 the Hussar rammed a rock and sank in New York’s East River at the point now known as Hell Gate. She was loaded with gold to pay British troops in America. Valuations on her golden cargo range all the way from $4,000,000 to possibly $8,000,000. The Hussar’s multi-million-dollar hoard has inspired a long series of salvage attempts, including Simon Lake’s unsuccessful dredging for the strong boxes in the 1930’s. But the gold is still lying in the bed of the river—probably buried now under tons of silt!

Then there was the war sloop De Braak. carrying $15,000,000 in gold the British had captured from seven Spanish ships. She capsized during a storm and sank 84 feet below the surface one mile off Lewes, Delaware, in 1798.

The Don Carlos II grounded on a coral reef in Matanzas Bay, Cuba, in November 1812. After a vain effort to save the ship by heaving cargo over the side, the crew finally took to the boats and abandoned $2,000,000 in gold, silver and copper coins in the hold of the wreck. In the same waters in 1628 a Dutch fleet of 24 ships chased into Matanzas 15 vessels of the Spanish Plate Fleet, loaded with a fabulous cargo of gold and silver from the New World. The Dutch seized $9,000,000 in loot but the defeated Spaniards scuttled several of their large galleons and thus dumped many more millions into the Bay.

Another Spanish galleon, the Santa Rosa, still hides some $30,000,000 in stolen Aztec gold in its rotting hulk off Key West, Florida.

The most fantastic of all Florida treasure-coast booty, however, is the $76,000,000 in pirate gold lying 25 feet under water some 40 miles off Pensacola. And who knows how many millions may be locked up in the pirate hoard of Jean Lafitte, who buried it somewhere in the lower reaches of Lavaca and Neches Rivers and Matagorda Bay in Texas?

In August, 1901, the steamer Islander, outward bound from Skagway, Alaska, to the U. S., struck an iceberg and foundered 15 miles south of Juneau. During the seventh attempt at salvage the hull cracked open. Nearly all the gold spilled out along the floor of Stevens Passage before the salvagers finally beached the vessel on Admiralty Island.

The Italian steamer, Florida, hit the White Star liner Republic in January, 1909. during dense fog 26 miles southeast of Nantucket. The Republic settled rapidly in 228 feet of water with $3,000,000 still locked up in her strong room.

The list of sunken treasure waiting to be recovered by some enterprising fortune hunter is almost endless. And it isn’t limited by either time, location or amount.

In a book titled They Found Gold, though, Historian A. Hyatt Verrill warns anyone who hopes to hit the jackpot: “Treasure hunting is not a poor man’s game. In fact, it is not a game for anyone unless he looks upon it as a game—an out-and-out gamble—for adventure, thrill and fun. . . .”

One man who recently found that the game does have a very solid payoff is Arthur McKee, city recreation director of Homestead, Florida. While he was following his hobby of underwater photography, he discovered a number of big, solid-silver bars and old coins hidden in the wreckage of a Spanish galleon off Plantation Key. An expert at the Smithsonian Institution in Washington said the ingots were “more than 200 years old” and carried authentic Spanish marks. McKee refused to say exactly how many pieces of eight and 60-to-80-pound silver bars he had turned up. He sold a 70-pound one to the Smithsonian but refused a $1000 bid on another.

Don’t worry that McKee or anyone else may exhaust Neptune’s undersea gold mine. There’s billions more where McKee’s treasure came from—the bottom of the sea.

And don’t worry about anyone’s claiming the sunken gold you recover. You don’t need any specific official approval to hunt for your fortune either in the ocean or in inland waters. Technically under common law, the U. S. Treasury has a right to collect all sunken or buried riches that anyone recovers in American territory. But actually the government never takes anything except its bite for income taxes and sticks to the finders-keepers rule.

Of course, if the wreck is a fairly recent one, there is always the possibility that the original owners may dispute your claim to the cargo. No one seems to know exactly how much time must elapse before a sunken fortune becomes the undisputed, legitimate prize for anyone who can recover it. Lawyers have filled books arguing over this point. Apparently, though, you’ll have no trouble proving your claim to any salvage treasure that’s been under water more than 35 years.

Suppose you do hock your car, borrow a boat and piece together a salvage rig as Bud Sharp did—what if you don’t haul up a million-dollar prize from Davy Jones’ multi-billion grab-bag—or capture an old Spanish treasure ship like that lucky Arthur McKee? If there’s a bit of the buccaneer in you, you’ll certainly find your fill of “adventure, thrill and fun.” And all you have to lose is just your “shoestring.” •