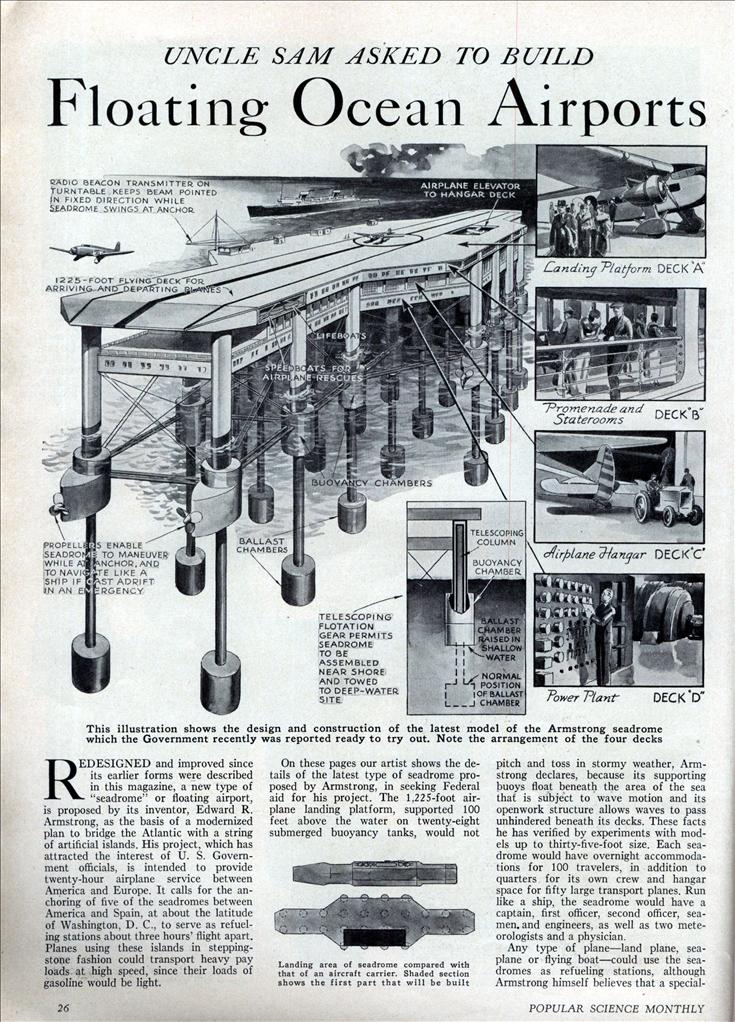 REDESIGNED and improved since its earlier forms were described in this magazine, a new type of “seadrome” or floating airport, is proposed by its inventor, Edward R. Armstrong, as the basis of a modernized plan to bridge the Atlantic with a string of artificial islands. His project, which has attracted the interest of U. S. Government officials, is intended to provide twenty-hour airplane service between America and Europe. It calls for the anchoring of five of the seadromes between America and Spain, at about the latitude of Washington, D. C, to serve as refueling stations about three hours’ flight apart. Planes using these islands in stepping-stone fashion could transport heavy pay loads at high speed, since their loads of gasoline would be light.

On these pages our artist shows the details of the latest type of seadrome proposed by Armstrong, in seeking Federal aid for his project. The 1,225-foot airplane landing platform, supported 100 feet above the water on twenty-eight submerged buoyancy tanks, would not pitch and toss in stormy weather, Armstrong declares, because its supporting buoys float beneath the area of the sea that is subject to wave motion and its openwork structure allows waves to pass unhindered beneath its decks. These facts he has verified by experiments with models up to thirty-five-foot size. Each seadrome would have overnight accommodations for 100 travelers, in addition to quarters for its own crew and hangar space for fifty large transport planes. Run like a ship, the seadrome would have a captain, first officer, second officer, seamen, and engineers, as well as two meteorologists and a physician.

Any type of planeâ€”land plane, seaplane or flying boatâ€”could use the seadromes as refueling stations, although Armstrong himself believes that a special- ized type of amphibian plane will be developed for this purpose. Aircraft will be guided to the island airport by a standard type of radio beacon, which is mounted on an automatic turntable controlled by a gyro compass. No matter how the seadrome may swing at anchor, the beam will always point in a fixed direction. Another innovation not found in his earlier plans is an emergency propulsion system that enables the seadrome to navigate like a ship if it is necessary to cast the seadrome adrift to ride out a storm of phenomenal severity, or if it should break loose from its moorings. This is provided by four propellers, each operated by a 500-horsepower electric motor that is supplied with current from the seadrome’s gasoline-electric power plant.

To anchor his seadrome, Armstrong proposes to float a 1,660-ton anchor of steel and concrete to sea, and sink it on the selected site by opening ports that allow water to rush into its inner chambers. Heavy steel cables moor the seadrome to a buoy that, in turn, is attached to the anchor. A tension engine on the seadrome takes up the slack on the cable so that it will not foul the understructure, paying it out automatically in response to a sudden strain.

Present plans call for a section one-fourth the size of a finished seadrome to be built and anchored at sea for final tests, including attempts to land upon it with a plane. If these are successful, the Government may be sufficiently interested to take over the project and build and operate the whole seadrome chain itself. Experts in international law believe the United States would have a right to anchor the islands on the high seas.