Modern Mechanix
Issue: Jun, 1936
Posted in: Sign of the Times
No Comments on Uncle Sam Battles “Dusters” and Floods (Jun, 1936) 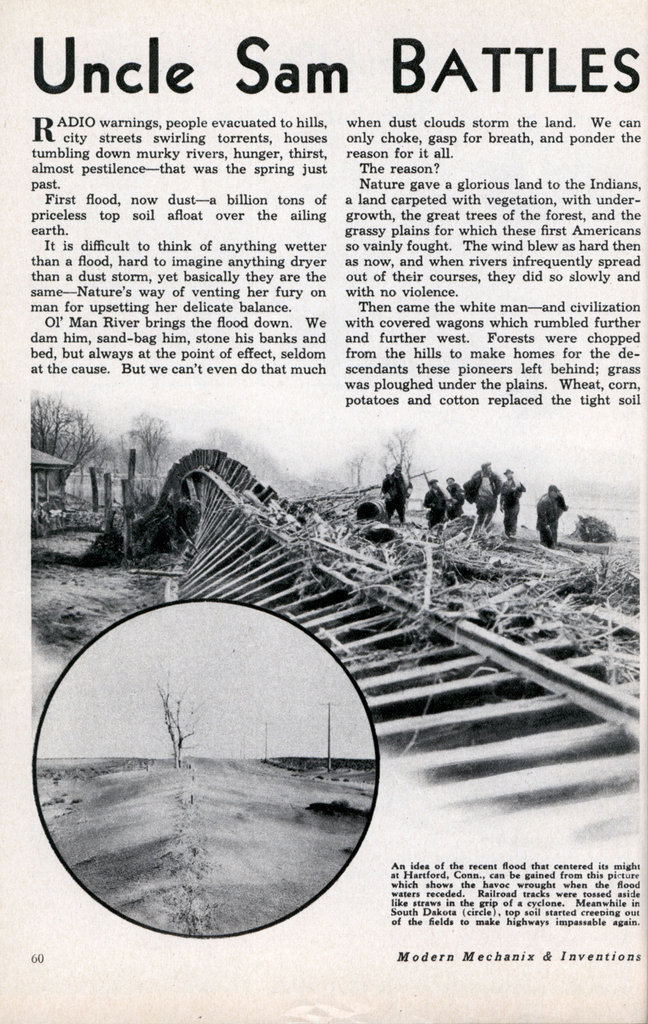 It is difficult to think of anything wetter than a flood, hard to imagine anything dryer than a dust storm, yet basically they are the same—Nature’s way of venting her fury on man for upsetting her delicate balance.

Ol’ Man River brings the flood down. We dam him, sand-bag him, stone his banks and bed, but always at the point of effect, seldom at the cause. But we can’t even do that much

when dust clouds storm the land. We can only choke, gasp for breath, and ponder the reason for it all.

Nature gave a glorious land to the Indians, a land carpeted with vegetation, with undergrowth, the great trees of the forest, and the grassy plains for which these first Americans so vainly fought. The wind blew as hard then as now, and when rivers infrequently spread out of their courses, they did so slowly and with no violence.

Then came the white man—and civilization with covered wagons which rumbled further and further west. Forests were chopped from the hills to make homes for the descendants these pioneers left behind; grass was ploughed under the plains. Wheat, corn, potatoes and cotton replaced the tight soil

and the matted grass binder. Nature was stripped bare.

Year after year Nature nursed her grief silently, striving with new undergrowth to repair the ravages man had wrought to her once proud beauty. Finally, when she couldn’t stand the pain any longer, she went berserk—centering her wrath at Johnstown, Pennsylvania. Every year since she has somewhere wreaked her revenge on puny man with flood, drought and dust.

Chief H. H. Bennett, of the U. S. Soil Conservation Service, explains it this way:

Pour water on a slanting board. It dashes off immediately. Spread a rug or door-mat over the same inclined surface and most of the water is held back or absorbed. Some of it may run off, but it runs off in a trickle,

not in a flood. Apply the simile to millions of gallons of water rushing down denuded hillsides into streams that have limitations upon their capacity for carrying water, and

the cause of floods is clear.

In the final analysis, there can be no permanent control of floods until we have control of erosion over entire watersheds, from the crest of ridges down across the slopes where floods originate and where soil is picked up to choke river channels.

There, too, lies the key to dust storm and wind erosion problems. The great “dusters” of the last two years, and those occurring now, are the result of a number of circumstances, topped by several years of intense drought. The overgrazing of cattle and sheep, along with the consequent destruction of nature’s carpet, bared the soil on the high plains. The drought came along about this time, and with grain crops failing on successive years, no binder at all was left to hold the land together. The sun baked the soil oven dry and it crumbled to powder. The wind swept it up and buoyed it aloft to float for miles on end, billions of tons of it. And it took nature between 400 and 600 years to create just one inch of this priceless top soil. In the United States 75 per cent of all cultivated land slopes enough to be subject to water erosion. The steeper land should never be broken; it must be permitted to go back into trees and grass.

“The men have been in the field every work day when weather conditions permitted. This section has received very little moisture this winter, but has had some very severe dust storms which made field work impossible at times. A severe wind and dust storm in March blew over the stakes and the markings were cut off by the dust, even the hedge posts were polished as if with sand paper while dust was drifting across roads. During another dust storm it was impossible for us to see for more than ten feet in the daytime.”

But it took two major disasters—the floods in Pittsburgh and Hartford to bring the problem home to Congress and the people. Now the law makers can be expected to act. Legislation was proposed in March that would give the Federal Government control of the Missouri River Valley in so far as flood protection was concerned. Already Representatives from flood-ridden States of the East are urging that similar legislation be enacted to protect their section of the country. Today all signs point to action.