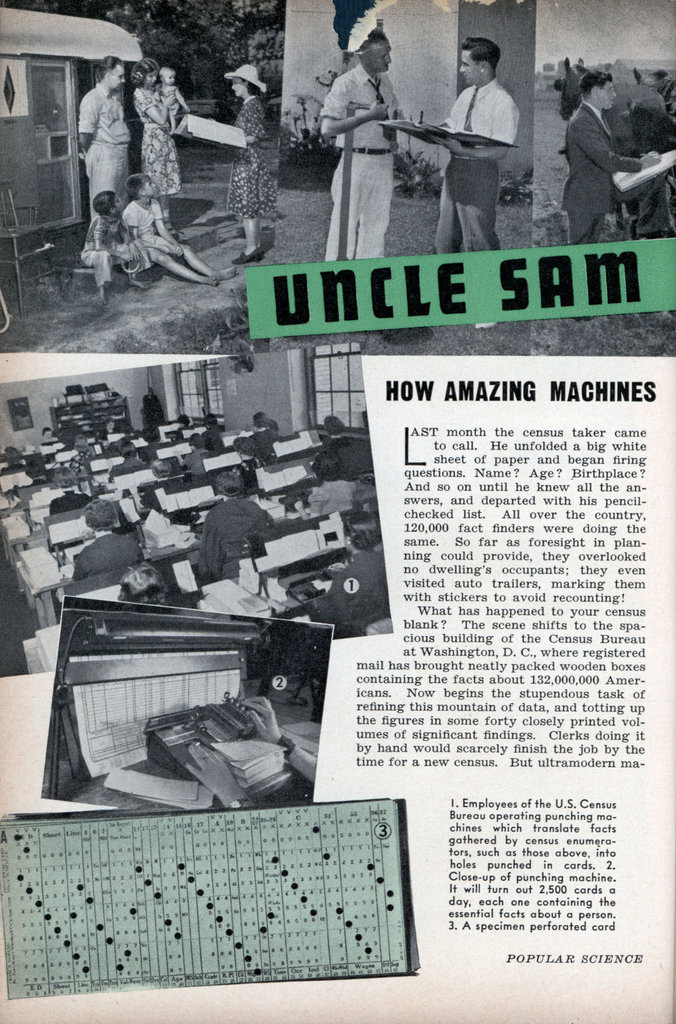 LAST month the census taker came to call. He unfolded a big white sheet of paper and began firing questions. Name? Age? Birthplace? And so on until he knew all the answers, and departed with his pencil-checked list. All over the country, 120,000 fact finders were doing the same. So far as foresight in planning could provide, they overlooked no dwelling’s occupants; they even visited auto trailers, marking them with stickers to avoid recounting!

What has happened to your census blank? The scene shifts to the spacious building of the Census Bureau at Washington, D. C, where registered mail has brought neatly packed wooden boxes containing the facts about 132,000,000 Americans. Now begins the stupendous task of refining this mountain of data, and totting up the figures in some forty closely printed volumes of significant findings. Clerks doing it by hand would scarcely finish the job by the time for a new census. But ultramodern machineryâ€”applying the punched-card system devised by Herman Hollerith, a former census manâ€”has streamlined the undertaking.

Look over the shoulder of this girl at a punching machine containing a blank card three and a half by seven and three eighths inches. Before her rests an edited, coded, census questionnaireâ€”possibly your very own. Deftly her fingers play upon thirteen keys. The card emerges punched with holes which show, by their position alone, everything that Uncle Sam wants to know about you.

Through a marvel of automatons, the electric sorting machine, rush the punched cards at 400 a minute. Suppose they are being sorted for age. As they fly along a conveyor, brushes of fine wire complete an electrical circuit through the punched hole in the “age” column. Cams shunt the cards into different conveyor tracksâ€”leading to the correct age group, say, “35-40.”

Keeping up the 400-card-a-minute pace, an automatic tabulator subdivides and records the facts about each age group â€”how many are married, what their occupations are, and forty or fifty other facts about them. Totals registered on counters can be printed at any time. Only lightning-fast machines would serve, for the cards will be resorted and recounted many times.

Every ten years, under the Constitution, the census must be taken. The first census, a pen-and-ink tabulation made in 1790, merely counted the number of peopleâ€”a few less than 4,000,-000. Since then, supplementary queries have given the census constantly growing value for a large number of governmental and private agencies.