Hoover of course would go on to be president and have a lovely series of outdoor living communities named after him. Weyerhaeuser is currently the largest paper company in the US.

It’s a little unclear to me why the Committee on Wood Utilization needed the plank aside from getting plugged in Modern Mechanix. 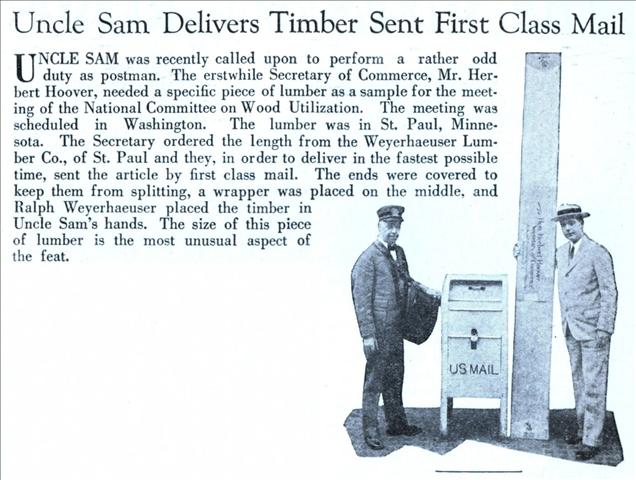 UNCLE SAM was recently called upon to perform a rather odd duty as postman. The erstwhile Secretary of Commerce, Mr. Herbert Hoover, needed a specific piece of lumber as a sample for the meeting of the National Committee on Wood Utilization. The meeting was scheduled in Washington. The lumber was in St. Paul, Minnesota. The Secretary ordered the length from the Weyerhaeuser Lumber Co., of St. Paul and they, in order to deliver in the fastest possible time, sent the article by first class mail. The ends were covered to keep them from splitting, a wrapper was placed on the middle, and Ralph Weyerhaeuser placed the timber in Uncle Sam’s hands. The size of this piece of lumber is the most unusual aspect of the feat.