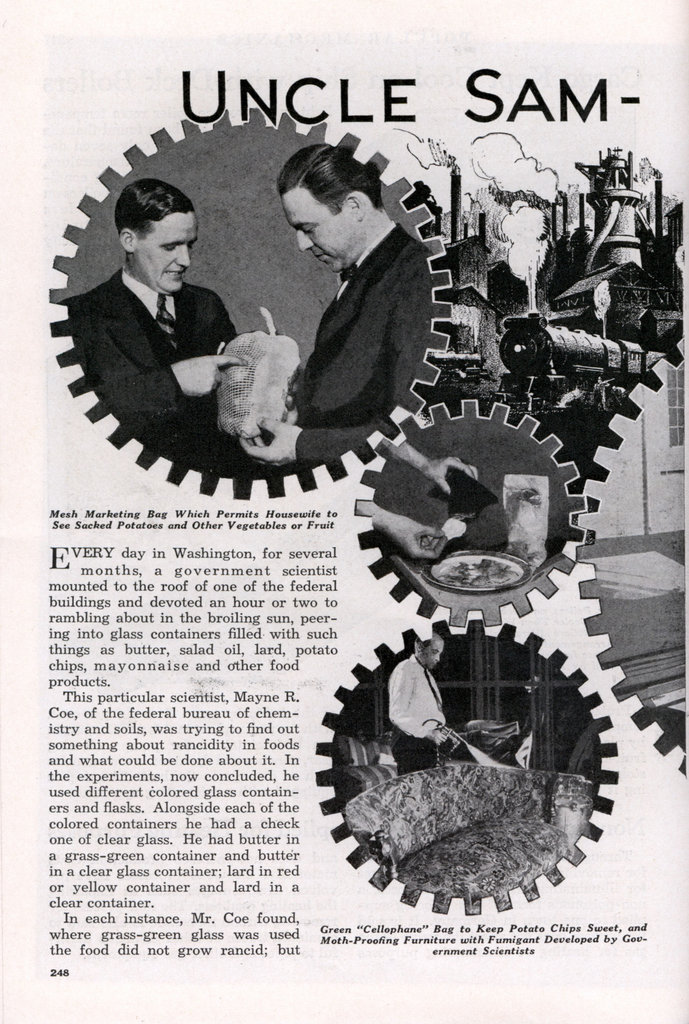 “EVERY day in Washington, for several months, a government scientist mounted to the roof of one of the federal buildings and devoted an hour or two to rambling about in the broiling sun, peering into glass containers filled with such things as butter, salad oil, lard, potato chips, mayonnaise and other food products.

This particular scientist, Mayne R. Coe, of the federal bureau of chemistry and soils, was trying to find out something about rancidity in foods and what could be done about it. In the experiments, now concluded, he used different colored glass containers and flasks. Alongside each of the colored containers he had a check one of clear glass. He had butter in a grass-green container and butter in a clear glass container; lard in red or yellow container and lard in a clear container.

In each instance, Mr. Coe found, where grass-green glass was used the food did not grow rancid; but where other colors were used, it did. In other words, he discovered that food packages of grass-green color prevent rancidity. This is but one of a long list of discoveries and inventions made by federal scientists which have become the property of every American citizen for the asking.

For Dr. Coe took out for his discovery what is known as a “public-service”- patent, one that guarantees no infringement on the public’s use of his patent on behalf of the government. These patents are worth millions to the public. When you consider that nearly $2,000,-000,000 worth of the nation’s annual food value is subject to rancidity and spoilage, and that this can be curtailed by using grass-green containers, you begin to see the value of such a discovery as that of Dr. Coe’s.

Recently E. M. Chace and D. J. Sober of the federal fruit and vegetable chemistry laboratory at Los Angeles, Calif,, demonstrated that the use of ethylene gas in walnut hulling speeds up the removal of husks from “stick tight” nuts and thus prevents the development of amber or brown kernels which sell at a large discount. So valuable is this discovery that the granting of a public-service patent application, now pending, means, without cost to walnut growers, an annual increase of about $375,000 in their income by cutting down the percentage of bad kernels in a year’s crop.

Ethylene gas also is used in treating fruits and vegetables after harvesting to hasten completion of certain natural processes. This development is also credited to an agricultural scientist, Dr. F. E. Denny, of the department’s Los Angeles laboratory. By experimentation he discovered that ethylene, a by-product of kerosene combustion, softened hard pears.

The result was a public-service patent taken out by him and available to every one. Now pears are treated with ethylene to soften them uniformly and quickly. This means that in five or six days they can go directly from cellar to preparation room in canneries, saving from one to two dollars a ton in sorting cost. Several varieties of apricots are also treated this way, as are bananas and tomatoes. Ethylene gas decreases the acid of tomatoes, giving them a sweeter taste.

The gas is also used successfully to fumigate dried fruit, packaged cereals and nuts. It prevents multiplication of insects and consequent deterioration. The treatment is also valuable for raisins and is being extended to other products, such as tobacco, stored silks, wool textiles and upholstered furniture. The gas, which is free from fire and explosion hazard when used according to directions, is deadly to insects, but comparatively harmless to man and does not appear to leave on the materials obnoxious odors or residues.

A patent on a wild game trap attachment was granted recently to Albert M. Day of the biological survey, in the interest of the public. This attachment, a small, detachable, thin steel spring to be inserted between the pan and the base of a standard steel trap, saves smaller animals from being caught in traps set for wolves, coyotes and other predators. As an animal puts about one-third of its body weight on a foot when walking the attachment can be adjusted to spare from the trap, rabbits, porcupine, badgers and other small, inoffensive creatures.

Another public-service patent was granted R. B. Gray and L. G. Schoenleber, of the bureau of agricultural engineering. It is a pick-up attachment for corn pickers, corn binders and other row harvesters, and means cleaner cut cornfields, a larger percentage of grain and fodder harvested and, consequently, greater insect control, especially of the corn borer. Steel fingers on an endless chain sweep the ground as the harvester passes through the field and gather to the machine for binding stalks on the ground or stalks twisted awry.

A public-service patent is now out covering a process for removal of poisonous spray residues from fruits and vegetables. It is in the name of Arthur M. Henry of the department of agriculture and consists essentially in the removal of spray residues by washing the fruit or vegetables With dilute alkali and acid solutions, followed by rinsing and drying. It does away with the old wiping method.

As a result of experiments with soaking and parboiling rough rice before milling, two government scientists have insured for American rice a higher percentage of whole kernels, and a flavor now associated only with certain special types of imported rice. These scientists, Jenkin W. Jones and J. W. Taylor, of the bureau of plant industry, have applied for a public-service patent covering the discovery and soon the process will be free to all the rice millers in the United States. It consists in soaking the rough rice in water and then steaming under pressure a sufficient time to gelatinize the kernels. The rice is then thoroughly dried and is ready for milling. The moist heat treatment toughens the grain by merging the starch grains into a solid mass which becomes very hard on drying.

Another valuable public-service patent recently granted is that to Robert J. Cheatham for a mesh marketing bag. This bag permits a housewife to see sacked potatoes, oranges and other fruit while at the same time saving the grocery man’s time and hers through sacking up the food.

As an inventor Uncle Sam is the world’s greatest and as a dispenser of his discoveries to the public he is unsurpassed.