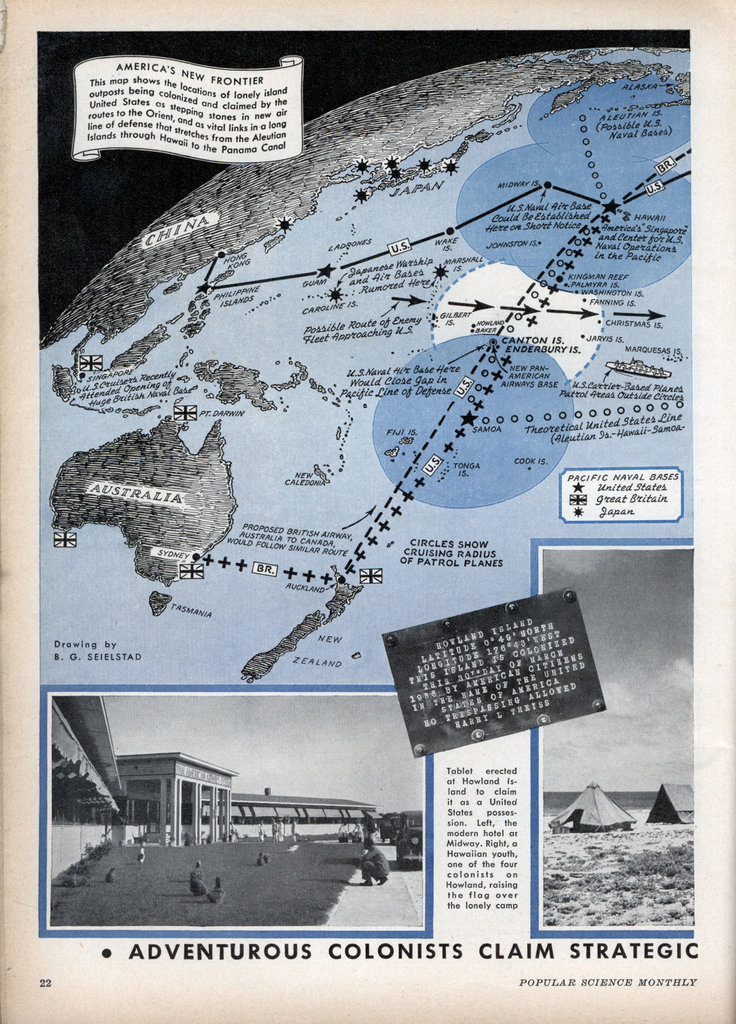 Naval supremacy in the Far East, leadership in bridging the Pacific with commercial airways, ownership of vast new stores of mineral treasure—all these are at stake in the first major move to hoist the American flag over new land since we purchased the Virgin Islands from Denmark in 1917. They lie behind plans just revealed for territorial expansion on a breath-taking scale unmatched in more than a century of the history of the American empire.

An executive order signed by President Roosevelt, assigning Canton and Enderbury Islands to the jurisdiction of the Interior Department, brushes aside British claims to the specks of land and serves notice that we regard them as American territory. The surprise move is expected to be only the first of numerous similar claims— based on recent researches indicating that many supposedly foreign-owned islands in the Pacific were first discovered or settled by Americans.

For the first time, too, the United States asserts sovereignty over enormous areas of the Antarctic Continent discovered by Byrd, Ellsworth, and other American explorers. Diplomatic notes to this effect have just been dispatched from Washington to governments with conflicting claims. Further American steps to annex territory are predicted in the arctic.

By far the most spectacular of these claims, in sheer size, the slice of Antarctica that we seek surpasses the area of Alaska. Its 640,000 square miles or more would bring to the United States the greatest block of new territory since the Louisiana Purchase, in 1803, added the makings of about a dozen states to the Union. What interests us more than square miles, however, is the recent discovery that it holds a goodly share

of the Antarctic Continent’s coal deposits—reserves that are known to be sufficient to supply the whole world’s needs after more accessible sources are exhausted. From veins in mountains 300 miles from the south pole, Admiral Byrd has predicted, monster tractors will then bear the coal across the white ice fields to bases on the rim of Antarctica, where it can be loaded aboard ships. Gold and other valuable minerals, too, may await the opening up of the frozen continent, where permanent settlements may well arise, linked to civilization by airplanes and radio.

A quarter of the way around the globe from frigid Antarctica, scorching under a tropical sun, Canton and Enderbury join the list of Pacific islets whose unfamiliar names have been thrust into headlines by swift-moving events of recent years—Midway, Wake, Christmas, Howland, Baker, Jarvis. What is it all about?

“Commercial aviation,” Government officials say. Pan-American Airways clippers need lonely Midway and Wake Islands as stepping stones to China—and the magic wand of aviation transforms them into bustling little atoms of civilization with hotels, golf courses, automobiles, and million – dollar flying-boat harbors. A supply ship anchors permanently at Kingman Reef to guide clipper planes by smoke from its funnel—and the smallest inhabited island in the Pacific, a surf-beaten coral strand no larger than a couple of city blocks, becomes a stop for flyers surveying the Pan-American’s projected route to the antipodes.

Canton and Enderbury Islands fit into the same plans, if United States ownership can be established. An Interior Department license has already been granted to Pan-American Airways to develop and use Canton as an airport. This coral atoll or ring-shaped strand, fifty to 600 yards wide, surrounding a lagoon of nine-mile diameter, has been described as one of the finest natural bases for seaplanes in the whole Pacific. Enderbury, thirty-five miles away, offers land planes an equally good haven, in the form of a flat expanse two and a half miles long and a mile wide, rising fifteen feet from the sea. Both islands lie at a convenient halfway point on the air route between Hawaii and New Zealand.

There is another side to the picture, however, that officials are more reluctant to discuss. Islands that can be used as commercial air bases could very well serve as advance bases for naval planes, the eyes of the fleet, in time of war. And Canton and Enderbury Islands, together with a number of other Pacific isles, occupy particularly strategic positions in the traditional American line of defense that extends from the Aleutian Islands in the north, through Hawaii and American Samoa, to the Panama Canal. Suppose, war strategists suggest, that a hostile fleet from across the Pacific should advance upon the American mainland. If the attack came between the Aleutian Islands and Hawaii, naval maneuvers are believed to have shown, there would be an excellent chance of detecting and repelling the invader. More uneasiness exists, however, about our ability to patrol effectively our ocean frontier to the south. Acquisition of Canton and Enderbury Islands would plug one gap.

Whether for peace or war, the drone of airplane motors over the Pacific has precipitated an international scramble for islands. Britain has recently established a wireless operator and a complete radio station on uninhabited Christmas Island, largest atoll in the Pacific with a circumference of ninety miles. For two years, British settlers have been occupying Hull Island, one of the Phoenix group of eight tiny islets to which Canton and Enderbury belong.

Americans, meanwhile, have not been idle. Since 1935, the United States has maintained sovereignty over Howland, Baker, and Jarvis Islands by having relays of four Hawaiian schoolboys— American citizens—occupy each one.

Although Britain sent a ship to Jarvis Island to look our colony over, Canton Island has become the scene of the first open controversy over ownership. During many years its only inhabitants have been myriads of sea birds wheeling overhead, rats that feast upon their eggs, and hermit crabs and turtles that bask on the white beach. If it were not for its newly acquired importance to aviation, the rival moves of two great powers to gain possession of this tiny, barren atoll would take on the aspect of a comic opera.

As this is written, seven Hawaiian youths under the leadership of Richard B. Black, of the U. S. Department of the Interior, are sharing Canton with two British subjects who were deposited there to back up the claim of the empire on which the sun never sets. While diplomats haggle over the question of the island’s ownership, the rival colonists are passing the time amicably together over beer and poker.

How will the controversies over our new territorial claims be decided? In the antarctic, it may take a mixed international commission to straighten out the overlapping claims of a number of countries—with the name of the United States now added to those of Great Britain and its dominions, France, Norway, Argentina, and others. Our Pacific claims so far conflict only with those of Great Britain, but others may eventually involve France and Japan. In the past, similar disputes sometimes have been settled by arbitration, often by direct agreement between the parties concerned.

As this issue goes to press, observers momentarily expect a friendly settlement of the Canton-Enderbury dispute. One unofficial proposal has been that America and Great Britain share ownership of the islands. In other quarters it is suggested that Great Britain might renounce all claims to Canton and Enderbury in return for a desired concession such as the privilege, so far withheld, of establishing a base for a Canadian-Australian air line at Hawaii.

Taking no chances of a technical slipup, Government officials announce our latest claims of ownership to be based on any or all of a number of points— that Americans first discovered the land in question, first surveyed it or fixed its position accurately upon charts, or first occupied and made use of it. To bolster our claims, historical experts under S. Whittemore Boggs, U. S. State Department geographer, have been delving for months into the log books of old whaling ships and other records of early seafarers at Nantucket and other ports along the Atlantic.

DOCUMENTS in faded handwriting, on torn and aged paper, have yielded to the investigators romantic tales out of the past. According to Edouard A. Stackpole of Nantucket, who aided the State Department search, Canton Island takes its name from the New Bedford whaleship Canton, which was wrecked there in 1854. Its crew spent three weeks marooned on the desolate shores. Then, despairing of rescue, they took to the ship’s boats and managed to reach Guam after a harrowing voyage of forty-nine days on the open sea.

Seeking mutineers who had murdered the captain and mates of the Nantucket whaler Globe and taken refuge on islands inhabited only by savages, the U. S. S. Dolphin in 1825 became the first American naval vessel to visit the Phoenix and Marshall groups. The schooner-of-war found two of the mutineers on the hitherto unknown Mulgrave Islands, six coral atolls in the Marshalls—and placed these dots of land on the map for the first time.

As early as 1791, writes Boggs in a report just published by the American Geographical Society, the China-bound American merchantman Hope discovered five of the Marquesas Islands.

AMERICAN discoveries, his report shows, include among others How-land and Baker Island, Palmyra Island, Kingman Reef, Washington Island, Fanning Island, and a number of the Phoenix group. Most of these and many others, including virtually all of the Gilbert and Ellice groups now held by Great Britain, were first accurately surveyed by Americans. As a further basis for our claims, pioneer American settlers occupied many Pacific islands for the purpose of extracting guano, bird droppings used for fertilizer, between 1860 and 1880.

American whalers and sealers alone accounted for the discovery of at least seventy-five islands in the Pacific, old documents indicate. Now, after many years, we are moving to make good the claims established by these doughty pioneers to our Pacific empire.