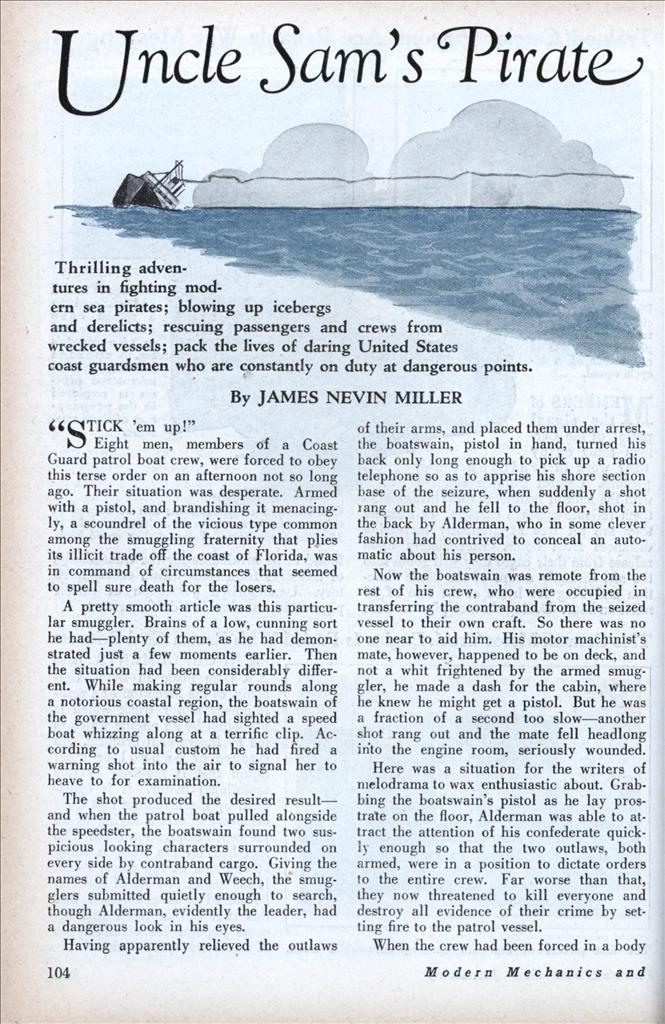 Eight men, members of a Coast Guard patrol boat crew, were forced to obey this terse order on an afternoon not so long ago. Their situation was desperate. Armed with a pistol, and brandishing it menacingly, a scoundrel of the vicious type common among the smuggling fraternity that plies its illicit trade off the coast of Florida, was in command of circumstances that seemed to spell sure death for the losers.

A pretty smooth article was this particular smuggler. Brains of a low, cunning sort he had—plenty of them, as he had demonstrated just a few moments earlier. Then the situation had been considerably different. While making regular rounds along a notorious coastal region, the boatswain of the government vessel had sighted a speed boat whizzing along at a terrific clip. According to usual custom he had fired a warning shot into the air to signal her to heave to for examination.

The shot produced the desired result— and when the patrol boat pulled alongside the speedster, the boatswain found two suspicious looking characters surrounded on every side by contraband cargo. Giving the names of Alderman and Weech, the smugglers submitted quietly enough to search, though Alderman, evidently the leader, had a dangerous look in his eyes.

Having apparently relieved the outlaws of their arms, and placed them under arrest, the boatswain, pistol in hand, turned his back only long enough to pick up a radio telephone so as to apprise his shore section base of the seizure, when suddenly a shot rang out and he fell to the floor, shot in the back by Alderman, who in some clever fashion had contrived to conceal an automatic about his person.

Now the boatswain was remote from the rest of his crew, who were occupied in transferring the contraband from the seized vessel to their own craft. So there was no one near to aid him. His motor machinist’s mate, however, happened to be on deck, and not a whit frightened by the armed smuggler, he made a dash for the cabin, where he knew he might get a pistol. But he was a fraction of a second too slow—another shot rang out and the mate fell headlong into the engine room, seriously wounded.

Here was a situation for the writers of melodrama to wax enthusiastic about. Grabbing the boatswain’s pistol as he lay prostrate on the floor, Alderman was able to attract the attention of his confederate quickly enough so that the two outlaws, both armed, were in a position to dictate orders to the entire crew. Far worse than that, they now threatened to kill everyone and destroy all evidence of their crime by setting fire to the patrol vessel.

When the crew had been forced in a body to the stern of the speedboat, Alderman, brandishing the automatic, ordered Weech to tear out the gasoline lines in the patrol boat’s engine room and attach a match thereto. Knowing very little about the boat’s construction, Weech, experiencing considerable trouble in carrying out this order, asked the wounded machinist’s mate to help him. But the latter, despite the threat of death, refused.

Somehow or other, however, Weech managed to tear out the gas lines and touch a lighted match to them. But he was in such a hurry to return to the speed boat to aid his confederate that he apparantly failed to notice that he had not ignited the gas.

Now, while Alderman held the crew at bay, Weech tried to start the speed boat’s engine for a quick getaway. Fortunately it missed fire and when Alderman glanced down to inquire of the trouble the patrol crew instantly and fearlessly rushed him. A fierce struggle ensued, Alderman firing several times with the result that one man was killed and another badly wounded.

The upshot of this dramatic story was the hanging of Alderman and the imprisonment of Weech. Drama almost equally as thrilling may occur at any moment during the activities of the official guardians of our coasts. In the course of their everyday affairs they may be called upon to fight pitched battles with rum runners; climb giant icebergs; battle with raging seas in an endeavor to save the lives of shipwrecked persons; or make perilous plunges into icy waters to rescue the drowning.

Consider the work of the far-famed ice- patrol which operates during the months of April, May and June of each year in the vicinity of the Grand Banks, off Newfoundland. Everybody knows that the presence of ice is a constant menace to the vessels passing through the northerly ice area. But not so many people realize that icebergs sometimes go as far south as the Gulf Stream and have been known to last, in those warm waters, as long as seven days. If the ice was stationary there would be little danger but the winds and currents move the icebergs causing a constant hazard. It is the duty of America’s patrol cutters to eliminate this danger by giving each vessel, of whatever nation, passing through the ice areas, all possible information regarding the currents, the set and drift of the ice, and its location at all times.

To obtain this data requires considerable cruising and searching for bergs in the most treacherous regions. Lieut. Commander Edward H. Smith of the Coast Guard, internationally known as an iceberg authority, reporting on a recent trip, said: “From 200 to 300 great bergs were normally in sight at all times. They would occasionally roar like thunder as they split and disintegrated in the warm mellow sun.”

Commander Smith remarks ironically that “there was really no danger from the icebergs so long as it did not get foggy. Should they ever become thick they could always be avoided by ships to the same degree as an auto avoids skyscrapers in Manhattan.”

During the past year the vessels and stations of the Coast Guard have destroyed 167 derelicts. A derelict, as its name implies, is a vessel that for some reason or other has been left by its owners to drift the seas, a constant menace to navigation.

About the only thing left to do —and this tough job falls to the lot of the coast guardsmen—is to try to destroy this navigation menace. Time and time again they have fired into crazy old hulks a goodly number of three-inch shells. Another method is to employ T.N.T. mines. Since they must be placed at strategic places in the derelict, the task is dangerous to say the very least.

At all Coast Guard stations a fixed beat or patrol is laid out in each direction along the shore. The station crew is divided into regular watches of two men each, and during the hours from sunset to sunrise the men patrol their beats, keeping a sharp lookout seaward at all times.

Each patrolman carries a number of red signal torches which he employs to warn vessels that come dangerously near shore, or to notify a vessel in distress that he is about to summon assistance.

So far as the average spectator is concerned, two of the most dramatic jobs of the Coast Guard are concerned with the remarkable workmanship, in times of ship- wreck, of the guns used to effect line communication with stranded vessels, and the life-cars which run on cables shot out to stranded vessels by the gun.