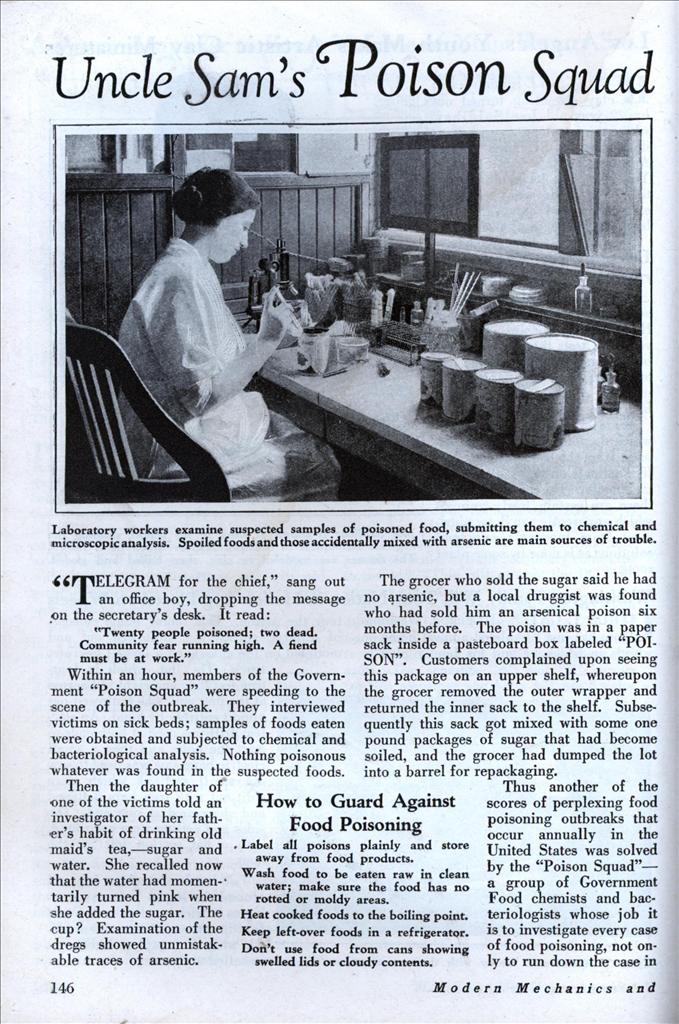 Poisoned food epidemics are becoming increasingly rare, thanks to the eternal vigilance waged by government squads of “poison chasers” who relentlessly track down contaminated food shipments. This article tells you how to guard against poisoned food in your home.

“TELEGRAM for the chief,” sang out an office boy, dropping the message on the secretary’s desk. It read: “Twenty people poisoned; two dead. Community fear running high. A fiend must be at work.”

Within an hour, members of the Government “Poison Squad” were speeding to the scene of the outbreak. They interviewed victims on sick beds; samples of foods eaten were obtained and subjected to chemical and bacteriological analysis. Nothing poisonous whatever was found in the suspected foods.

Then the daughter of one of the victims told an investigator of her father’s habit of drinking old maid’s tea,—sugar and water. She recalled now that the water had momentarily turned pink when she added the sugar. The •cup ? Examination of the dregs showed unmistakable traces of arsenic.

The grocer who sold the sugar said he had no arsenic, but a local druggist was found who had sold him an arsenical poison six months before. The poison was in a paper sack inside a pasteboard box labeled “POISON”. Customers complained upon seeing this package on an upper shelf, whereupon the grocer removed the outer wrapper and returned the inner sack to the shelf. Subsequently this sack got mixed with some one pound packages of sugar that had become soiled, and the grocer had dumped the lot into a barrel for repackaging.

Thus another of the scores of perplexing food poisoning outbreaks that occur annually in the United States was solved by the “Poison Squad”— a group of Government Food chemists and bacteriologists whose job it is to investigate every case of food poisoning, not only to run down the case in hand but in order that the entire supply of the poisonous substance may be seized.

Most poison cases, according to Inspector G. P. Larrick, of the Federal Poison Squad, who recently conducted an international chase after a poisonous fruit cake destined for a Canadian family, are the result of negligence in the preparation and handling of foods in the home. Hence, poison outbreaks are most frequent following community picnics, club suppers, and other forms of get-together feasts where the food is contributed by various participants. This type of case is difficult to solve because of the many sources from which the food is derived.

The solution of criminal poison cases, on the other hand, is comparatively easy, inasmuch as the motive usually is readily ascertained and the sale of the poison can usually be traced. In a typical case, a family in Ohio became ill with gastric trouble, and one member of the family died. The Poison Squad analyzed samples of food eaten but found nothing of a poisonous nature. A canvass of retail drug stores disclosed that the family cook had recently bought some rat poison. The cook confessed that she had dumped this poison into the coffee, and she was subsequently convicted of murder.

The prevention of nation-wide poisoning epidemics is the primary interest of the Federal government in running down food poisonings. An extensive system of cooperation between Federal, State and local health authorities has been developed to this end, whereby prompt seizures of poisonous goods are made wherever the products may be in the channels from manufacturer to consumer. For administrative purposes the nation is divided into ten sections, to each of which is attached a member of the Federal Poison Squad. Only men who have had long experience in food and drug law enforcement are assigned to this duty. Immediately upon notification of a food poisoning case, an inspector rushes to the scene, gathers all available samples of food, dispatches these to a government laboratory, and interviews the victims.

When a food in general distribution is found to be poisonous, it is trailed back to the grocer who sold it, to the wholesaler, and to the manufacturer. The distribution of every lot is ascertained, and local and State health officers are furnished the names and addresses of the food handlers involved in their immediate jurisdictions. If necessary, the foods are trailed to the ultimate consumers, and depending on the seriousness of the case, a general alarm may be broadcast throughout the community by means of radio or the daily press.

The efficiency of this system is exemplified by the so-called Chicago onion poisoning case. In this case, investigation of the death of one man and the serious illness of another in the Windy City disclosed that the victims had eaten imported canned onions which contained the virulent toxin that causes botulism, one of the most dangerous forms of food poisoning known. The onions had been packed in Italy and distributed by a New York representative to. many cities and towns in the East and Middle West.

The Poison Squad obtained the names and addresses of all dealers to whom shipments had been made, and the telegraph wires were soon singing with seizure orders. Shipments were located in twenty-five cities. The bacteriologists examined 368 cans taken as samples and found 22 cans so highly toxic as to cause death when fed to guinea pigs; 30 others yielded cultures that produced toxin fatal to guinea pigs. The case was cleaned up within forty-eight hours.

The Federal officials explain that it is possible to seize goods before they have gone into consumption on a nation-wide scale because usually the first poison case is located close to the source of original distribution, and in most instances the case is solved while the bulk of the supplies are still en route to distant markets. Legitimate food processors and packers lend every cooperation in this work. The only exception to this situation in recent years was the epidemic of ginger Jake paralysis last summer, which could not be run down promptly because of the “bootlegging” elements in the case.

In the laboratory, foods are subjected to every known chemical and bacteriological test; they are fed to guinea pigs; recently a glass stomach has been invented in which digestive processes simulating those of the human stomach may be observed. The chemists use this artificial stomach in which to determine the digestibility of the protein in foods. The proteins to be tested are placed in glass containers in a dilute solu- tion of hydrochloric acid similar to that found normally in the human stomach, the proper quantity of pepsin is added, and the mixture is placed in an incubator where the temperature is kept at the same point as that of the human stomach, about 37 degrees centigrade.

After a certain number of hours the contents of the container are sampled and analyzed. The digestive effect is measured by the ratio of what is known as amino nitrogen to total nitrogen. After the food has been acted upon by the pepsin and hydrochloric acid, it is treated with trypsin and a dilute alkaline solution, as nearly as possible like the digestive juices found in the small intestine. This process tells the investigator what the probable digestive action on any particular food will be in the intestine.

A specimen of fruit cake which was said to have made four people in Virginia violently ill were sent for inspection to the laboratories of the Food, Drug, and Insecticide Administration. Samples of the cake were fed to animals in the laboratory and these animals promptly showed symptoms of poisoning. Chemical analysis showed the cake to be heavily loaded with arsenic; nearly 2,000 times the amount which is regarded as being within the limit of safety. The cake had been purchased from a housekeeper who conducts a small retail business in home-baked fruit cakes for the holiday season.

Inspector Larrick, assigned to the investigation, discovered that the arsenic contaminated cake was one of nine baked for the Christmas trade, three of which had been sold. One cake had made six people ill; another had poisoned four people. The third cake had been bought by a house-to-house agent whose identity and whereabouts were unknown, but who had stated that the cake was to be sent to relatives in Canada.

Larrick tried to locate this agent in Washington and New York through the manufacturers and distributors of the commodity sold by the agent, without success. Then he canvassed each house in the neighborhood where the cake had been sold, and two days before Christmas he found a colored woman who told Larrick of another colored woman in a nearby town, who “might know the agent”. The inspector was informed by this second person that the agent had lived in that neighborhood but had moved some time previously without leaving a new address; however, that the agent had a relative, back country.

Larrick located this relative, and told him that at the time the cake was bought, the agent had said something about sending the cake to relatives in Canada. The Canadian relatives were called by long distance telephone, and the cake was found,—the night before Christmas. Larrick’s job was not finished, however, until he should run down the source of the poison.

Inquiry in the home where the cake was made showed that whenever the flour from a certain sack was used, the symptoms of poisoning recurred. Chemical analysis showed the flour to be heavily contaminated with arsenic, and the significance of this discovery, if the flour was representative of other flour of the same brand which had been commercially distributed, was appal- ling. The prospect of wholesale poisoning of flour users was visualized by the inspector, who took immediate steps to investigate the mill, the warehouse, and the stores from which the flour had probably been obtained. No contamination with arsenic was uncovered at any of these points.

A second search of the premises disclosed an empty sack containing minute quantities of a white powder which proved to be calcium arsenate, the same substance found in the flour and fruit cakes. It was later established that the calcium arsenate, bought for garden use, had become mixed accidentally with the flour.

“Poison Squad” officials lay down a few simple rules for safeguarding against food poisoning. All poisons should be plainly labeled and stored in a safe place away from food products. Arsenical insecticides may easily be mistaken for flour. Food to be eaten raw should be fresh, clean, free~from abnormal odors, rotting areas and from mold, and should be washed in clean water fit for drinking purposes. Cooked foods should be heated to the boiling point.

Foods such as meat pies, scalloped fish or oysters, hash, some salads, puddings, custards and cream pie fillings may cause illness because in the process of preparation insufficient heating is used to destroy the bacteria or their toxins. Never use food from cans showing springing, flipping or swelled lids. Throw away, without tasting, any food from glass jars showing leaks around the rubber rings, cloudiness of the liquid, or spurting of the contents when the bottle is opened. Sound food freshly and thoroughly cooked does not cause food poisoning.

How to Guard Against Food Poisoning Label all poisons plainly and store away from food products.

Wash food to be eaten raw in clean water; make sure the food has no rotted or moldy areas.

Keep left-over foods in a refrigerator.