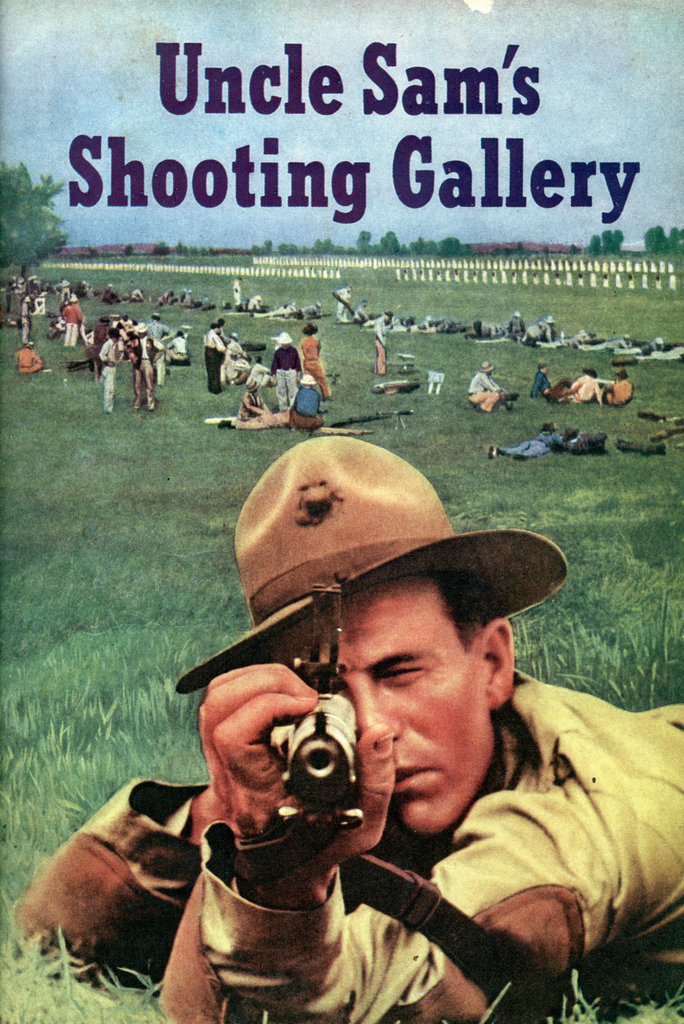 RUN BY THE U. S. ARMY FOR SPORT AND DEFENSE

TRAVELING in planes, trains, buses, private cars, trucks, and even on foot, more than 10,000 eager men, women, and youngsters from all corners of the nation will head toward the shores of Lake Erie in mid-August for the largest sporting event in the world. The lure that draws this myriad of bankers, housewives, G-men, clerks, police, shopkeepers, and citizens from practically every other walk of life, is the annual National Rifle Matches sponsored jointly by the U. S. War Department and the National Rifle Association.

In this mammoth gunpowder rodeo, millions of rounds of ammunition will be fired from pistols, .30 caliber rifles, and smallbore guns. Police will school themselves in getting the jump on criminals. Hundreds of beginners will learn how to shoot and how to handle guns safely. Marksmanship records will be assaulted, historic trophies won, and national champions crowned. And at the end of the three-week bullet jubilee, a new group of straight-shooting citizens will scatter to their homes to add to the defensive power of the nation and to the worldwide reputation of the United States as a country of crack shots.

The shooting starts August 18 at the Army’s Camp Perry, a few miles from the lake town of Port Clinton, Ohio. Nowhere else in the world, experts state, is there a rifle and pistol range that can compare with it. Here, stretched out side by side for two and a half miles, are target ranges of every size from 1,000 yards for .30 caliber rifle competition to twenty-five yards for pistol events. And around the fringe of the ranges is a far-flung city of tents to house the extensive Army personnel required to run the matches, and also to accommodate practically all the contestants and visitors.

For the matches are open to any citizen of the United States, and the Army will put up any American who wants to compete. Tents, beds, and bedding are supplied without charge, while a mammoth cafeteria serves meals at low prices. For the rifle or pistol fan who would like to bring his family, the “Squaw Camp,” a part of the reservation next to the bathing beach, is set aside. Here a man and his wife can have a floored, screened tent, with electricity, for $1.50 a day. Bringing junior along adds just fifteen cents a day to the tent cost.

And you don’t even have to own a gun, for the Army will issue you a .30 caliber rifle, or a .45 caliber pistol, and furnish all the ammunition you’ll need for match firing. If you’ve never fired a rifle, a competent Army instructor will show you how.

In addition to the vanguard of individual contestants, the Perry meet will attract civilian rifle and pistol teams from every state in the union, plus teams representing the National Guard, metropolitan police forces, the U. S. Army, Coast Guard, and Marine Corps, the Customs Service, the White House police, G-men, and other state and Federal agencies. Last year, almost 5,000 persons competed, firing a total of more than 3,000,000 shots.

Step out on the range when the matches get under way and you’ll see a sight that you’ll never forget. With the roar of service rifles in your ears, you will gape at a two-mile line of fire. Crack marksmen, lying prone, are battering bullseyes 1,000 yards away. Down the line, under the watchful eyes of soldiers and officers, civilians are getting their first chance at firing the new Garand semiautomatic rifle recently adopted by the Army.

Group by group, all along the firing line, the nation’s greatest shots, together with the dubs and rank tyros, are standing, sitting, kneeling, and lying prone, shooting rifles, pistols, and revolvers at various ranges, in timed-fire, rapid-fire, and slow-fire matches. Playing a sharpshooter’s swing tune, bullets whistle through the air and zing into the targets, or occasionally kick up a spatter as they miss the target and plow into the waters of Lake Erie beyond the butts.

Strolling down back of the firing line, or sighting along the pits behind the targets, you’ll marvel at the horde of Army officers and men needed to conduct all phases of the competition. You’ll note target spotters, range officers, scorers, checkers, computers, and messengers. In the pits, the trench back of the butts, you’ll watch enlisted men haul targets down from their racks in the line of fire, for checking, repair, and replacement.

Officials estimate that fifteen Army men are required for each ten contestants in order to run the matches in the smooth, efficient, and safe manner for which the meet is famed. An indication of how Army supervision makes for safety is found in the fact that only two casualties have coccurred in twenty-one years of match firing at Camp Perry.

Down at the left of the range, you’ll witness one of the most interesting phases of the Perry matchesâ€”the National Police School, where representatives from police departments in all sections of the country are schooled in the latest methods of police science, and sent back home as qualified instructors to their fellow officers in the home forces. Subjects studied in the full-week course include disarming an attacker, shooting at rapidly disappearing targets, using tear gas and the Thompson submachine gun, hand-to-hand fighting, and the fundamentals of jujutsu.

Here at the Police School is the famous “Hogan’s Alley,” a curious group of backless building fronts representing the dilapidated frame structures lining one side of the main street of Bucktown Gulch, Ariz., as it appeared in 1879. By means of a series of hand levers and attached cables, silhouette figures are popped suddenly into the window or door openings of “Bud Peagler’s Pool Parlor,” or the “Wa-hiawa Cafe,” while police try to drill them with pistol bullets before they disappear two seconds later.

Near-by is a replica of the rear of an automobile. Traveling on an overhead trolley, it speeds away as police fire at it in attempts to “blow” a rear tire. Similar in operation is a running-man target, which crosses the officers’ line of fire at an angle from left to right.

The value of this police training is dramatically revealed by the experience of the Detroit, Mich., police who have sent representatives ,to the school for years. When they first started, an average of four policemen lost their lives for every criminal killed in Detroit. Today, the average is one policeman to every eleven criminals.

ior championship of the nation, and some of whom are barely big” enough to hoist a rifle to their shoulders. A U. S. Marine is assigned to each of these neophytes to give him expert instruction in the rudiments of rifle shooting and gun handling. Before the youngster comes out from under the wing of his leatherneck guide, he will have learned not only how to shoot a gun and handle it safely, but also how to clean it, take it apart, and put it back together again.

Truly a giant training ground for the development of the art of shooting, in all its phases from the instruction of future sharpshooters to the rewarding of record-breaking feats of marksmanship, the annual Camp Perry meet has had much to do with the establishment of shooting as one of the most popular American sports. And now, with national defense of primary importance, Perry’s influence may prove to have been of even greater value than that of a clean, wholesome sport in building up the armed might of the United States.