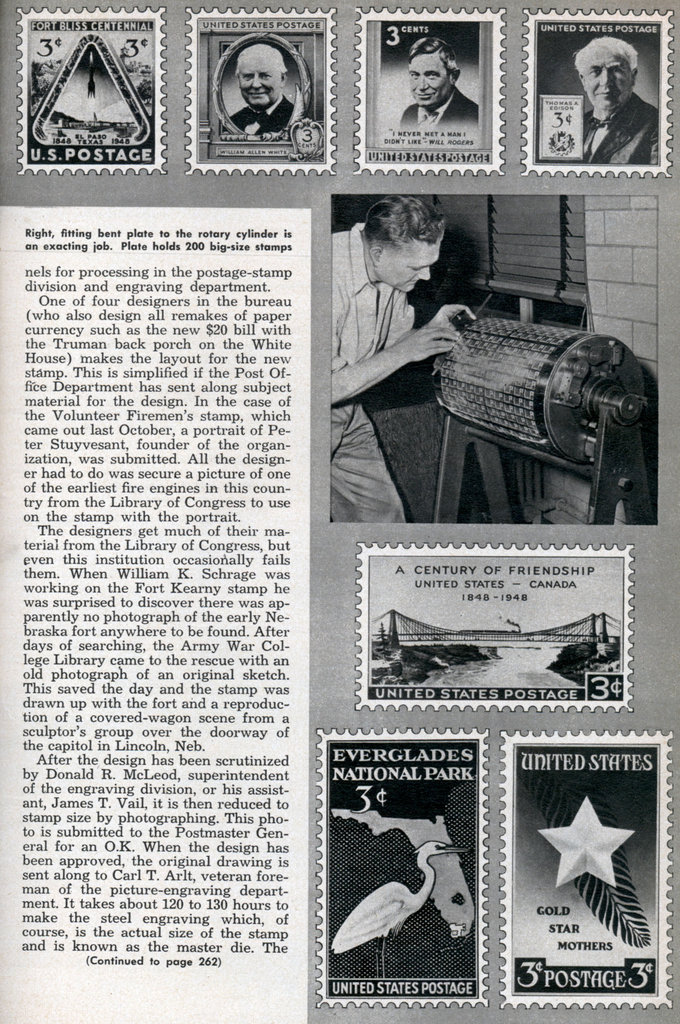 The bureau has the big, job of turning out some 20 billion postage stamps a year, (stamped envelopes are subcontracted) and billions of federal tax stamps such as are found on packages of cigarettes, playing cards and many other items.

The special postage stamps are called “commemoratives.” In years past, the com-memoratives have been issued by the authority of the Postmaster General who also is empowered by law to revise postage-stamp designs. Much fanfare accompanies the issuing of a commemorative and the stamp goes on sale the first day at a significantly located post office. For example, the U.S.-Canada Friendship stamp had a first-day sale at Niagara Falls, N. Y.; the Will Rogers stamp at Claremore, Okla., and the William Allen White stamp at Emporia, Kans. First-day covers, coveted by stamp collectors, mailed from these post offices usually number about 450,000. This often means the organization of a special staff and weeks of preparation for the,big day. The initial printing order for com-memoratives is usually 50 or 60 million.

Sometimes sales of a special stamp are boomed by an unpredictable idiosyncrasy. When the three-cent Pony Express commemorative came out in 1940, somebody discovered the pony on the stamp looked like Seabiscuit, the famous race horse. This caused a furor among collectors and a rush to acquire the stamp. Then there was the two-cent Grand Canyon stamp back in 1934. A newspaper carried the story that if the stamp were held sidewise one could see a perfect profile of Mussolini. The rush was on.

If anyone thinks that getting out a commemorative, or any other kind of stamp, is a simple operation he is dead wrong. The procedure on the commemoratives ordered by Congress goes like this: The congressional authorization is sent to Jesse M. Donaldson, postmaster general; he sends it along to Alvin W. Hall, director of the Bureau of Engraving and Printing, who relays the order into the proper channels for processing in the postage-stamp division and engraving department.

One of four designers in the bureau (who also design all remakes of paper currency such as the new $20 bill with the Truman back porch on the White House) makes the layout for the new stamp. This is simplified if the Post Office Department has sent along subject material for the design. In the case of the Volunteer Firemen’s stamp, which came out last October, a portrait of Peter Stuyvesant, founder of the organization, was submitted. All the designer had to do was secure a picture of one of the earliest fire engines in this country from the Library of Congress to use on the stamp with the portrait.

The designers get much of their material from the Library of Congress, but even this institution occasionally fails them. When William K. Schrage was working on the Fort Kearny stamp he was surprised to discover there was apparently no photograph of the early Nebraska fort anywhere to be found. After days of searching, the Army War College Library came to the rescue with an old photograph of an original sketch. This saved the day and the stamp was drawn up with the fort and a reproduction of a covered-wagon scene from a sculptor’s group over the doorway of the capitol in Lincoln, Neb.

After the design has been scrutinized by Donald R. McLeod, superintendent of the engraving division, or his assistant, James T. Vail, it is then reduced to stamp size by photographing. This photo is submitted to the Postmaster General for an O.K. When the design has been approved, the original drawing is sent along to Carl T. Arlt, veteran foreman of the picture-engraving department. It takes about 120 to 130 hours to make the steel engraving which, of course, is the actual size of the stamp and is known as the master die. The cutting is done in soft steel and the design appears in reverse.

The next step is to decide on color. A call goes out to Herbert C. Tucker, superintendent of the ink-making division, for “pull out” proofs (actually dabs of color) in several dozen shades. All of the stamp inks are especially made for steel-engraving work and Tucker keeps approximately 150 colors on hand. The bureau buys pigments under very rigid specifications, operating its own testing laboratory and production lines of mixing, grinding and blending machines. All samples are matched against standard samples for color and consistency. The ink-making department, a complete factory in itself, produces 3,000,000 pounds of ink a year for both currency and stamps. All formulas are secret.

Working with the various samples of ink, proofs of the new stamp are made from the master die. These proofs, known as die proofs, are submitted to the Postmaster General who selects the desired color. Then the master die is hardened. This is done by heating the die in a cyanide solution to a cherry red at 1400 degrees Fahrenheit and then quickly cooling it in a brine bath. The hardened master die then goes to the transfer department where it is placed in a transfer press. Under heavy pressure this press transfers the cutting on the die to the outer rim of a soft-steel roll. After hardening, this roll is used to transfer the design to the steel plates from which the stamps are printed. The plates are also hardened and if they are to be used on rotary presses they are bent to fit the cylinders.

Generally, only four plates are made for the special commemorative stamps. The ordinary three-cent stamp has about 60 plates while only 30 plates are required for the other ordinary stamps. The bureau has eight sets of plates available for the five-cent airmail stamp.

The men working in the transfer department, whose business it is to reproduce engravings on steel, are known as siderog-raphers. There are only 55 siderographers in the United States and nine of them work in the bureau.

Printing of the stamps is under the close supervision of Jack M. Smith, superintendent of the postage-stamp division. Any tour of inspection through this department is under the watchful eye of the Secret Service. Every sheet or roll of paper used in the printing or proofing must be accounted for later, either in the form of finished stamps or scrap which is sent to an agency of the Treasury Department for verification and destruction by burning. There is no wastepaper to be thrown away here where any scrap might be a priceless collector’s item.

Most of the stamps are printed on the nineteen large and nine small rotary presses. These presses were designed by a former employee, especially for the job. Each press can turn out about 7800 sheets a day. If the sheets are for the ordinary variety of stamps they will contain 400 stamps each; if for coil stamps (used in coin machines), only 170, and if for the book stamps, 360. The majority of the commemoratives are printed 200 to a sheet. The approximate number of stamps turned out by a single press in one day is 3,120,000. The total value of stamps turned out in a day varies, but on many days the figure runs close to $4,000,000.

Printing is also done on flat-bed presses for stamps of limited demand. Examples are the Canal Zone stamp and stamps of high denominations such as $1, $2 and $5.

As the long web of stamps rolls from the rotary presses it passes through a gumming machine and an electric drying chamber. Here the gum is hardened in 30 seconds. This vegetable gum is not to be confused with glue andâ€”stamp lickers please noteâ€”is said to be as pure and edible as the best food. At the end of the drier the sheets are wound into big rolls.

The rolls are moved along to machines which perforate the stamps in both directions and cut the rolls into sheets of 400 or 200 stamps each, depending on the size of the stamps. These perforating machines are electronically controlled. Register marks are engraved on the printing plates and appear on the sheets of stamps in the form of dashes. These dashes are scanned by an electric eye to hold the paper in proper position. Formerly, this adjustment was made manually which resulted in many mutilated stamps.

Every sheet is examined once and counted twice. Where flaws occur it is possible to salvage as little as a quarter of a sheet, the defective portions going to the furnaces after being checked by the section of mutilated paper. The inspected stamps form units of 100 sheets each. The 100-sheet units are stapled in four places on the margins and then cut into quarter sheets, the size for delivery. These big “books” hold 10,000 stamps of the ordinary size and 20 books make a large package of 200,000 stamps. One of these packages, which is about a cubic foot in size, is worth $6000 if the stamps are of the three-cent denomination. Armored trucks carry the packaged stamps daily from the bureau to the Washington, D. C, Post Office.

Stamps sold in post offices in book form go through a slightly different procedure. They are stitched in booklets containing 12 or 24 stamps. The stamps for dispensing machines are wound into coils of 500, 1000 and 3000 stamps.

There are almost as many regulations in regard to the printing of any matter pertaining to stamps as there are to currency. It is illegal to reproduce a stamp (to illustrate an article such as this) unless the stamp is less than three fourths of actual size or more than l1/^ times actual size. One company recently decided to send out in an advertising brochure a full-color reproduction of all the 1948 commemorative stamps. The Secret Service, which guards the Post Office Department, went into immediate action. The brochures were confiscated and so were the plates from which they were printed and action in the federal courts was threatened. That company learned the hard way that Uncle Sam is mighty particular about anything concerning his stamp factory.