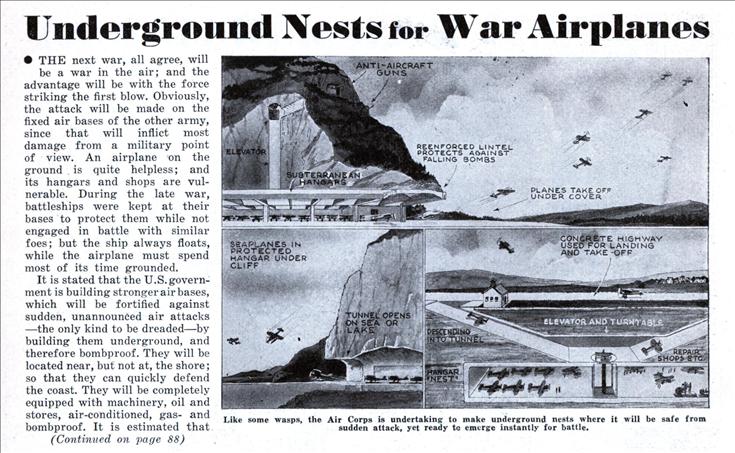 THE next war, all agree, will be a war in the air; and the advantage will be with the force striking the first blow. Obviously, the attack will be made on the fixed air bases of the other army, since that will inflict most damage from a military point of view. An airplane on the ground is quite helpless; and its hangars and shops are vulnerable. During the late war, battleships were kept at their bases to protect them while not engaged in battle with similar foes; but the ship always floats, while the airplane must spend most of its time grounded.

It is stated that the U.S. government is building stronger air bases, which will be fortified against sudden, unannounced air attacks —the only kind to be dreaded—by building them underground, and therefore bombproof. They will be located near, but not at, the shore; so that they can quickly defend the coast. They will be completely equipped with machinery, oil and stores, air-conditioned, gas- and bombproof. It is estimated that the cost of each will be from $5,000,000 to $10,000,000. From each, at a moment’s notice, a flotilla of scouting, combat and bomb planes can be poured out—like a swarm of wasps. Seaplanes could be based in cliffs hollowed out, like the Rock of Gibraltar, fortified, and with tunnels leading out into the ocean, or even nearby lakes.

In addition, as illustrated, smaller subterranean hangars are to be located along the highways (which, in an emergency, will serve for flying fields) and camouflaged. By this means, the Air Corps flotillas will have innumerable suitable stations, throughout the country, on which to base a defensive campaign.