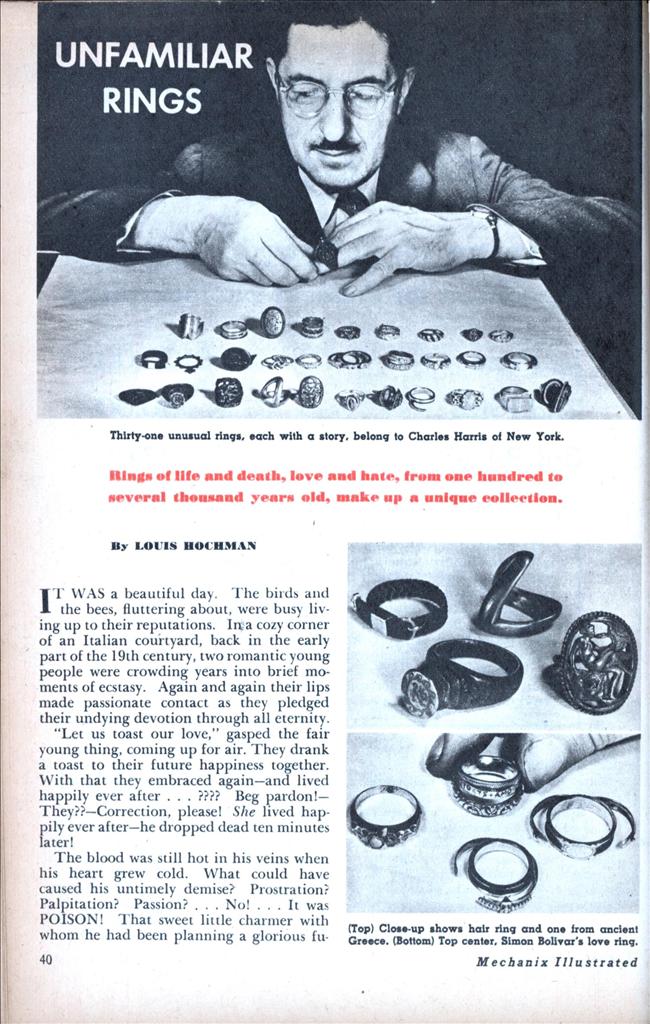 Rings of life and death, love and hate, from one hundred to several thousand years old, make up a unique collection.

IT WAS a beautiful day. The birds and the bees, fluttering about, were busy living up to their reputations. In a cozy corner of an Italian courtyard, back in the early part of the 19th century, two romantic young people were crowding years into brief moments of ecstasy. Again and again their lips made passionate contact as they pledged their undying devotion through all eternity.

The blood was still hot in his veins when his heart grew cold. What could have caused his untimely demise? Prostration? Palpitation? Passion? . . . No! … It was POISON! That sweet little charmer with whom he had been planning a glorious future put the kibosh on him with the aid of a tricky little ring she wore. By flicking a tiny hidden catch on the ring, she had caused the emerald and its elaborate setting to spring open, exposing a secret compartment from which she casually dropped a pellet of poison into the gentleman’s drink.

That ring, a masterpiece of fine workmanship and deadly design, originally owned and operated by the Cigliano family, famous in the court life of the period, is now a treasured part of a unique collection of rings owned by Charles Harris, a New York jeweler who has been collecting them as a hobby for many years. His collection of over thirty odd rings, the oldest of which is Greek and dates back to 750 B. C., represents a cross-section of history little known to the public. From the most sentimental designs to the most deadly, each has its own interesting history. Some, in fact, have even shared in making history. There is Napoleon’s signet ring, made for him by one of his men from a cannon. Napoleon used this ring to impress his seal on messages.

There is the wedding ring which Simon Bolivar, the South American revolutionist, gave to his wife. Few knew that the ring had an inner section which could be lifted out to reveal a hidden message of love. Later, in his battles for democracy, Bolivar used the ring to pass secret code messages between his trusted generals and himself.

Chaperon rings, dating from 1855-1875, open to hold treasured mementos such as locks of hair.

Frequently Mr. Harris gets requests to make up unusual rings. Though love itself has remained unchanged, lovers are continually cooking up new ways of expressing their emotion. One romantic couple wanted to seal their commingled blood in a wedding ring. Harris obliged them by selecting a bloodstone, (the girl’s birthstone). Splitting the stone, he grooved the lower half to hold the blood, then sealed the upper half in place with diamond cement.

His favorite story concerns the old Syrian superstition that a ring with a beryl will prevent child-bearing. Some years ago a Manhattan rug merchant, sire of eight healthy sons and daughters, came to have his wife’s plain wedding ring exchanged for one with a beryl. Harris, who knows better than to argue about superstitions, did the job.

“In a way—at least the woman had no more children,” Harris replied. “But,” he added, “the husband died four months later.”