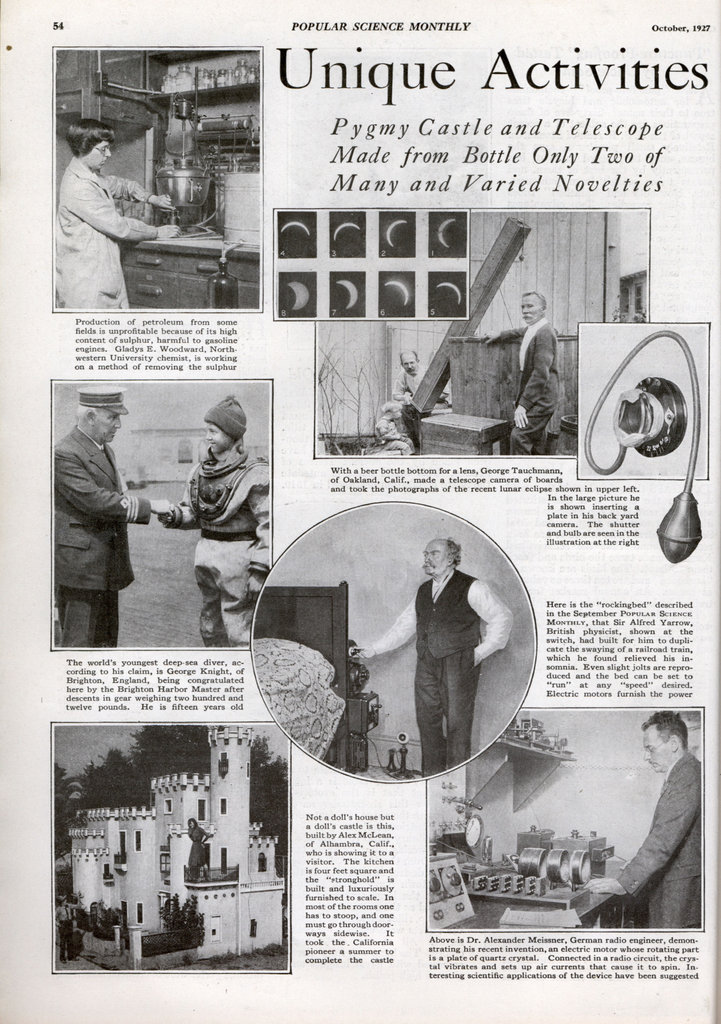 Production of petroleum from some fields is unprofitable because of its high content of sulphur, harmful to gasoline engines. Gladys E. Woodward, Northwestern University chemist, is working on a method of removing the sulphur

The world’s youngest deep-sea diver, according to his claim, is George Knight, of Brighton, England, being congratulated here by the Brighton Harbor Master after descents in gear weighing two hundred and twelve pounds. He is fifteen years old

Not a doll’s house but a doll’s castle is this, built by Alex McLean, of Alhambra, Calif., who is showing it to a visitor. The kitchen is four feet square and the “stronghold” is built and luxuriously furnished to scale. In most of the rooms one has to stoop, and one must go through doorways sidewise. It took the California pioneer a summer to complete the castle

With a beer bottle bottom for a lens, George Tauchmann, of Oakland, Calif., made a telescope camera of boards and took the photographs of the recent lunar eclipse shown in upper left.

In the large picture he is shown inserting a plate in his back yard camera. The shutter and bulb are seen in the illustration at the right

Here is the “rockingbed” described in the September Popular Science Monthly, that Sir Alfred Yarrow, British physicist, shown at the switch, had built for him to duplicate the swaying of a railroad train, which he found relieved his insomnia. Even slight jolts are reproduced and the bed can be set to “run” at any “speed” desired. Electric motors furnish the power

Above is Dr. Alexander Meissner, German radio engineer, demonstrating his recent invention, an electric motor whose rotating part is a plate of quartz crystal. Connected in a radio circuit, the crystal vibrates and sets up air currents that cause it to spin. Interesting scientific applications of the device have been suggested

A passion play and more in wood is this intricate carving depicting the birth, life and crucifixion of the Christ, the result of fifteen years’ labor of Gemanas Nikodimow, a Greek monk seen above. It is all of boxwood. Distinguished Greek artists have appraised the work at $200,000, but so far the carver has refused all offers to buy the masterpiece

While some widows are succeeding their husbands in politics and in old established business fields, Mrs. Carl Oelze will continue to operate the San Diego, Calif., Airport, which her husband founded. And she will not conduct it altogether from the ground, either, as the photograph shows. New planes will be bought for the passenger service and more hangars will be built. Shortly before his fatal illness Oelze won attention by successfully landing an airplane by means of a parachute

A motor car body in the form of a huge camera was built by Louis A. Daignault, photographer, of Biddeford, Me., and mounted on a light chassis. The interior is his dark room. The owner travels from town to town making pictures and his car constitutes an excellent advertisement of his business. There is ample room for bulky supplies and developing and printing apparatus

Miss Pearl Ruth Sherman is just twenty-one and runs her own drug store in Philadelphia, Pa., where she is shown mixing and grinding medicine in a mortar. In 1924 she was graduated from Temple University as a pharmacist. She went to work, then into business, and now she is her own boss, making herself work sixteen hours a day at her profession

Rev. B. F. M. Fahl, a clergyman of Philadelphia, Pa., had a parish but no church. Recently he decided to build one himself with his wife as his chief assistant. By day both work on the structure and in the evening members of the flock, sometimes as many as two hundred, join in the labor. The only actual cost of the edifice is that of building material and plumbing. Even some of this may be donated