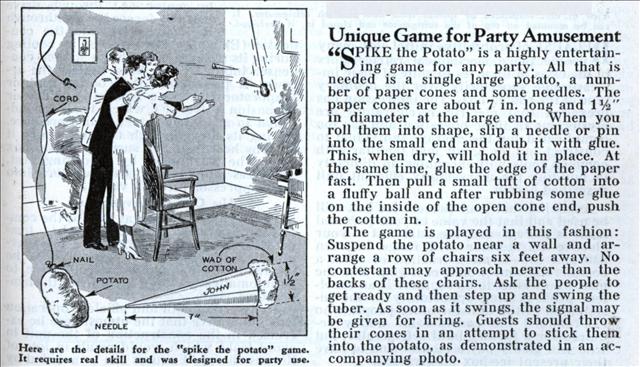 “SPIKE the Potato” is a highly entertaining game for any party. All that is needed is a single large potato, a number of paper cones and some needles. The paper cones are about 7 in. long and 1-1/2″ in diameter at the large end. When you roll them into shape, slip a needle or pin into the small end and daub it with glue. This, when dry, will hold it in place. At the same time, glue the edge of the paper fast. Then pull a small tuft of cotton into a fluffy ball and after rubbing some glue on the inside of the open cone end, push the cotton in.

The game is played in this fashion: Suspend the potato near a wall and arrange a row of chairs six feet away. No contestant may approach nearer than the backs of these chairs. Ask the people to get ready and then step up and swing the tuber. As soon as it swings, the signal may be given for firing. Guests should throw their cones in an attempt to stick them into the potato, as demonstrated in an accompanying photo.