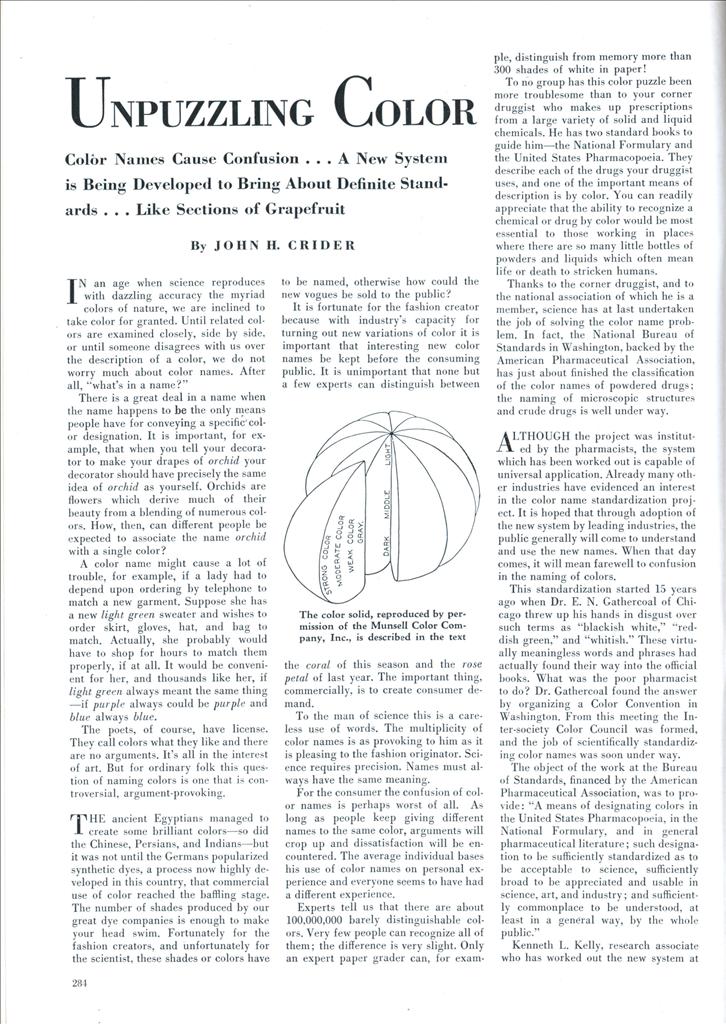 IN an age when science reproduces with dazzling accuracy the myriad colors of nature, we are inclined to take color for granted. Until related colors are examined closely, side by side, or until someone disagrees with us over the description of a color, we do not worry much about color names. After all, “what’s in a name?”

There is a great deal in a name when the name happens to be the only means people have for conveying a specific color designation. It is important, for example, that when you tell your decorator to make your drapes of orchid your decorator should have precisely the same idea of orchid as yourself. Orchids are flowers which derive much of their beauty from a blending of numerous colors. How, then, can different people be expected to associate the name orchid with a single color?

A color name might cause a lot of trouble, for example, if a lady had to depend upon ordering by telephone to match a new garment. Suppose she has a new light green sweater and wishes to order skirt, gloves, hat, and bag to match. Actually, she probably would have to shop for hours to match them properly, if at all. It would be convenient for her, and thousands like her, if light green always meant the same thing —if purple always could be purple and blue always blue.

The poets, of course, have license. They call colors what they like and there are no arguments. It’s all in the interest of art. But for ordinary folk this question of naming colors is one that is controversial, argument-provoking.

THE ancient Egyptians managed to create some brilliant colors—so did the Chinese, Persians, and Indians—but it was not until the Germans popularized synthetic dyes, a process now highly developed in this country, that commercial use of color reached the baffling stage. The number of shades produced by our great dye companies is enough to make your head swim. Fortunately for the fashion creators, and unfortunately for the scientist, these shades or colors have to be named, otherwise how could the new vogues be sold to the public?

It is fortunate for the fashion creator because with industry’s capacity for turning out new variations of color it is important that interesting new color names be kept before the consuming public. It is unimportant that none but a few experts can distinguish between the coral of this season and the rose petal of last year. The important thing, commercially, is to create consumer demand.

To the man of science this is a careless use of words. The multiplicity of color names is as provoking to him as it is pleasing to the fashion originator. Science requires precision. Names must always have the same meaning.

For the consumer the confusion of color names is perhaps worst of all. As long as people keep giving different names to the same color, arguments will crop up and dissatisfaction will be encountered. The average individual bases his use of color names on personal experience and everyone seems to have had a different experience.

Experts tell us that there are about 100,000,000 barely distinguishable colors. Very few people can recognize all of them; the difference is very slight. Only an expert paper grader can, for example, distinguish from memory more than 300 shades of white in paper!

To no group has this color puzzle been more troublesome than to your corner druggist who makes up prescriptions from a large variety of solid and liquid chemicals. He has two standard books to guide him—the National Formulary and the United States Pharmacopoeia. They describe each of the drugs your druggist uses, and one of the important means of description is by color. You can readily appreciate that the ability to recognize a chemical or drug by color would be most essential to those working in places where there are so many little bottles of powders and liquids which often mean life or death to stricken humans.

Thanks to the corner druggist, and to the national association of which he is a member, science has at last undertaken the job of solving the color name problem. In fact, the National Bureau of Standards in Washington, backed by the American Pharmaceutical Association, has just about finished the classification of the color names of powdered drugs; the naming of microscopic structures and crude drugs is well under way.

ALTHOUGH the project was instituted by the pharmacists, the system which has been worked out is capable of universal application. Already many other industries have evidenced an interest in the color name standardization project. It is hoped that through adoption of the new system by leading industries, the public generally will come to understand and use the new names. When that day comes, it will mean farewell to confusion in the naming of colors.

This standardization started 15 years ago when Dr. E. N. Gathercoal of Chicago threw up his hands in disgust over such terms as “blackish white,”‘ ‘”reddish green,” and “whitish.” These virtually meaningless words and phrases had actually found their way into the official books. What was the poor pharmacist to do? Dr. Gathercoal found the answer by organizing a Color Convention in Washington. From this meeting the Inter-society Color Council was formed, and the job of scientifically standardizing color names was soon under way.

The object of the work at the Bureau of Standards, financed by the American Pharmaceutical Association, was to provide: ‘”A means of designating; colors in the United States Pharmacopoeia, in the National Formulary, and in general pharmaceutical literature; such designation to be sufficiently standardized as to be acceptable to science, sufficiently broad to be appreciated and usable in science, art, and industry; and sufficiently commonplace to be understood, at least in a general way, by the whole public.”

Kenneth L. Kelly, research associate who has worked out the new system at the Bureau of Standards with Dr. Deane B. Judd of that institution, believes that the objectives have been achieved.

The Munsell Book of Color was adopted as the basis of the new system. Under the Munsell System the colors are numbered but not named. It divides the color solid into 20 sections or segments, breaks the segments into pieces, and gives a number to each. The new color project went further and gave a name to each piece. The names in the new color system, like the numbers in the Munsell System, represent a range of color—not simply one color.

The color solid, which is the foundation of the whole project, may be described as a grapefruit, the top white, the bottom black, with the color spectrum running around the middle as the Equator circles the earth. Theoretically, all of the known colors and shades of color are in this solid. The color namers, following the Munsell principles, broke the solid into sections, each section corresponding to the natural sections of a grapefruit. There are 20 sections and, as you can understand from the description of the solid, the colors in each one of these sections range in lightness from top to bottom (the darkest at the bottom), and in intensity from the center to the outer surface.

After the segments were broken into approximately equal pieces, still following the Munsell principle, the research workers were ready for their real job— naming the pieces. After considerable experimentation, they adopted 23 common English words as the words they would use in the naming system. Since the color solid had been divided into 320 pieces—about 16 pieces to a segment (some more, some less)—they had to Put these 23 words into 320 combinations to describe the colors.

It is significant that there are no midnight, schooner blue, leafmold, sistina, quimper, or other such names among those selected. You may recall having seen some of the names just mentioned used in connection with feminine fashions or interior decoration. Words like these have meaning to the Textile Color Card Association of New York, which performs a great service to the textile industry by supplying such appealing names to newly created fashions. But to you, for example, what does queen blue mean? Compare such words to those used by the color namers at the Bureau of Standards. Here they are: Basic Colors—Red, Yellow, Green, Blue, Purple, White, Black, Grey.

Having tentatively adopted these names—and the indications are that they will stick—the color namers then had to go through the National Formulary and the United States Pharmacopoeia to look at each of the drugs mentioned to see what color names from the new system correctly described them. Sometimes the same color had been named variously. There will be no more “blackish white” or plain “whitish,” although the color namers are using the “ish” ending as a modifier of definite names, such as “reddish purple,” “yellowish green,” and so on. Such combinations have a definite meaning in the new word system, while formerly they were used simply to suit the fancy of the observer and with no relation to a standard system.

When the druggists’ committee has completed checking the new color names which have been assigned to the drugs mentioned in the two books, it is expected that these accurate designations will be officially approved and adopted for use in future editions of these important volumes.

ANY visitor to the Colorimetry Section of the Bureau of Standards may see the namers at work, as well as the exhibits which they have prepared to illustrate their achievements. In one case the visitor will see three samples of the same drug from three reputable wholesale houses. The difference in color is obvious to anyone, yet in the National Formulary they are all classified as Light Broun. Under the new naming system tentatively adopted for these specimens, they will be called light yellow brown, weak red brown, and brown, respectively. The beauty of the system is that each name has a definite meaning. If there is any question about it all the questioner has to do is look at the color solid to see what color the name describes.

The system also has the advantage of being workable by anyone with good eyesight. In a few minutes’ time a person understanding the system can definitely classify almost any color under the new system. When fine points arise, resort is had to the colorimeter, a machine which enables the worker to measure differences in color which are not calculable by the unaided eye.

When the results have been officially adopted purple will be purple and blue will be blue. Arguments over color will be solved at once by recourse to the color solid and the new naming system.