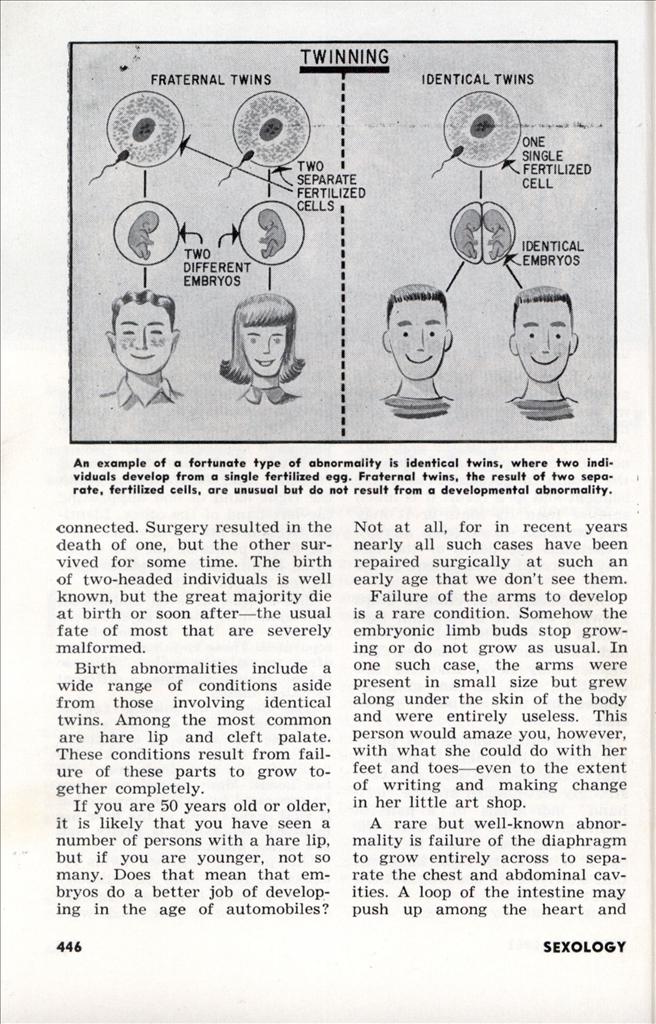 Nature rarely errs, but when it does the results are often most extraordinary.

IF you are acquainted with identical twins, you have probably never thought of them as the result of a birth abnormality. Actually they are, though in this case they can consider themselves lucky.

Many of these abnormalities are not so fortunate, although we rarely hear of them. Most end up merely as another case in the records of clinics and hospitals unless they are quite extraordinary.

Identical twins develop from a single fertilized egg and grow as any other one for a time, but not for long. For some unknown reason, the early embryonic cells separate into two masses and a complete child develops from each.

This separation of the cells into groups that usually hold together as one, is the basis for calling identical twins a birth abnormality—even though they are so well known that we accept them as a usual part of life. The condition is known in cattle, dogs, and other animals as well as in human beings.

Since the two develop from a single cell, both have the same inheritance pattern and that is why they are so similar in appearance. Identical twins are, of course, always of the same sex.

We have called identical twins an abnormal development, so now we may ask if there are also abnormal types of such twins. There certainly are. One of the pair may not make proper attachment to the womb to get sufficient nourishment and as a result it is much smaller than its mate or it may not continue to develop at all. Sometimes the death of the one may interrupt development of the other.

Occasionally, one embryo stops growing when it is so small that it does not disturb the larger one, and its tissues are resorbed. The mother may never know of this condition, and it can even be missed by the attending physician.

It is a little difficult to prove for certain, but there is evidence that some people who are very strongly left-handed are the “left-hand” individuals of a pair of identical twins in which the “right-hand” one failed to develop. If it were the right hand one that survived, no one would know about the other.

Just what do we mean by a “left-hand” twin? In this duplication the masses of cells set up a pattern so that the two embryos undergo a face-to-face duplication or a back-to-back pattern.

Such a duplication gives a “mirror image” condition, with the right hand of one duplicating the left hand of the other. Identical twins are known in which even the finger prints of one are duplicated in mirror image pattern for all ten fingers of the other.

Side-by-side, or even end-to-end, development is known, as evidenced by twins that were not completely separated. These co-joined twins are often popularly called “Siamese twins,” though each has a different technical name.

The degree of joining (or of separation) varies and we see almost the full range of attachment —from a simple strip of skin between the two to a single body with two heads. Many joined twins can be separated by simple surgery but if vital organs such as the liver are involved, separation is pretty well out of the question.

One pair of co-joined twins received a great deal of publicity in the press a few years ago because the tops of their heads were connected. Surgery resulted in the death of one, but the other survived for some time. The birth of two-headed individuals is well known, but the great majority die at birth or soon after—the usual fate of most that are severely malformed.

Birth abnormalities include a wide range of conditions aside from those involving identical twins. Among the most common are hare lip and cleft palate. These conditions result from failure of these parts to grow together completely.

If you are 50 years old or older, it is likely that you have seen a number of persons with a hare lip, but if you are younger, not so many. Does that mean that embryos do a better job of developing in the age of automobiles?

Not at all, for in recent years nearly all such cases have been repaired surgically at such an early age that we don’t see them. Failure of the arms to develop is a rare condition. Somehow the embryonic limb buds stop growing or do not grow as usual. In one such case, the arms were present in small size but grew along under the skin of the body and were entirely useless. This person would amaze you, however, with what she could do with her feet and toes—even to the extent of writing and making change in her little art shop.

A rare but well-known abnormality is failure of the diaphragm to grow entirely across to separate the chest and abdominal cavities. A loop of the intestine may push up among the heart and lungs. Recently a routine chest X-ray of the chest revealed this condition without the patient ever having suspected its existence.

Abnormalities of the reproduction system have often been described in this magazine so we need mention just a few. The urethra (urine duct) in the male may open at the base of the penis instead of at the end, a condition known as hypospadia.

A condition that seems very strange, but quite understandable to an embryologist, is the presence of one or more extra mammary glands. Even though undeveloped, they may be present in extra numbers in men as well as women.

If we were to catalog all the abnormalities that result from unusual embryonic development, it would include virtually every part of the body.

Timing is considered very important, for if an organ or a part of an organ is interrupted in development, it may never recover from the impairment.

Almost everyone is curious about some of these abnormalities and immediately wants to know why these happen. People have been curious about these unusual structures for a long time, for lists of them were made in old Greece before the beginning of the Christian era.

The famous Pliny in the first century, who was interested in so many things, said of these abnormalities, “Nature creates monsters for the purpose of astounding us and amusing herself.”

At an early time these freaks were called “monsters” from an old Latin word that meant “warning.” And as in so many other things, first ideas bore a note of superstition. It was believed that, when a monster appeared, it was a dire warning that something dreadful was about to happen.

Certain taboos were associated with monsters too for it was believed that intercourse during the menstrual period might result in monster development. In old Hebrew writings we find: “Menstruous women shall bring forth monsters.”

Maternal impressions, falls and bruises came in for their share of credit too, and probably there are people now living who still give considerable credence to these.

Creatures that were half-human and half-animal were favorite subjects of classical mythology. Mermaids, centaurs and many others were described and pictured. Since these mythical creatures were so popular in early stories, many people believed in their existence and supposed that they developed from human and animal parentage. Modern studies indicate, however, that there is no evidence that any human-animal cross has ever been successful.

More modern views include two lines of thought. One is that some- thing causes an interruption in the growth of the embryo. There may be a partial loosening of the placenta so that blood with its supply of oxygen does not get through to the embryo properly or that the umbilical cord is twisted too tightly or there is pressure on it.

Even a very brief reduction of oxygen is believed to stop or alter the course of embryonic development. Vitamin deficiencies may result in impaired development and we are pretty certain that an inactive thyroid gland of the mother has an influence.

In the experimental incubation of chicken eggs, a lower or higher than normal temperature results in many abnormal chicks. A common condition here is a doubling of a portion of the spinal column. This factor, of course, usually does not enter the picture in human beings since the temperature is pretty constant.

A second general reason for birth abnormalities is that something happens to the genes and chromosomes of the germ cells. In the formation of the sperm or egg, the microscopic portions that normally cause the development of the structures of the body are not functioning properly.

Whole chromosomes may be lost from the germ cells as they develop, leaving the embryo without the usual directors of development.

Other than seeing to it that the mother has good health and proper nutrition, we cannot do much to prevent birth abnormalities. With the hundreds of structures that must develop to make up a complete body, it is one of the great wonders of the world that so many people are born with a reasonable degree of perfection.