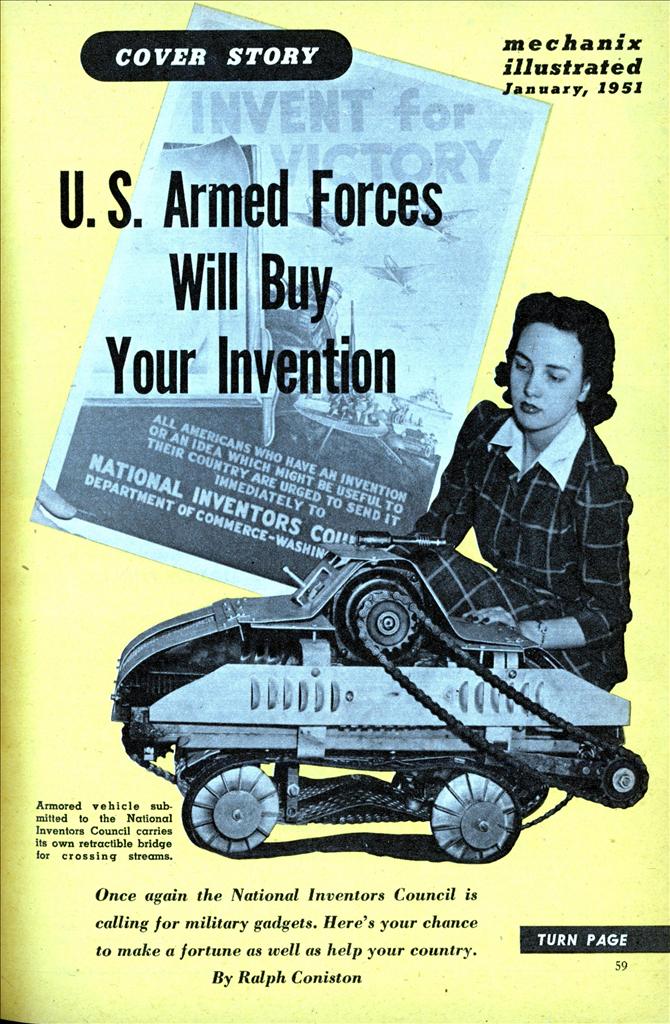 Once again the National Inventors Council is calling for military gadgets. Here’s your chance to make a fortune as well as help your country.

AMERICAN inventors are on the verge of handing Russia a major defeat on the propaganda front. The Soviets have been jamming our Voice of America broadcasts and for the past year the nation’s top electronics scientists have been working on a method to counter the Red’s activities, at the suggestion of the National Inventors Council. And now officials report that success is near.

What is the National Inventors Council and how is it that the suggestion came from them? Well, the Council acts as an open door to inventors who want to submit ideas to the armed forces. Its job is to acquaint you with the problems confronting the military services and refer potentially valuable ideas to the appropriate agencies. Periodically, it issues lists of needed inventions.

The Council was organized just before World War II and evaluated 250,000 ideas during the war. The Armed Forces recognized its peacetime value, too, and it has continued as a division of the Department of Commerce. At present, ideas are being received at the rate of 8,000 a year—but the Korean war has caused an enormous spurt in submissions.

While the National Inventors Council must be most concerned with problems of the moment, it manages to look ahead, too. Take the case of Robert C. Harris, an inventor from Fort Wayne, Ind. Back in 1940 Harris sent in a device he had perfected— a small magneto operated by the closing of a hand. It didn’t provide a continuous current—only a spark. The Council agreed that Harris’ invention was ingenious, but what could the spark be used for? Neither Harris, the Inventor’s Council nor the armed services could figure that out so it was shelved.

Several years passed and the army discovered that the bazooka’s original ignition system was unreliable. What was the solution? They asked the National Inventors Council and the board remembered Harris’ whatzit. His “useless” invention saved the day and brought Harris a fortune.

Perhaps you have some little gadget kicking around which you think is of no importance now. It may prove to be tremendously valuable to you and your country. During the last war, Dr. Borris Berkman, civilian scientist, suggested to the Council that milkweed floss should be substituted for kapok because supplies of this material had been cut off by the Japanese. As a result, Dr. Berkman got a government contract, set up the Milkweed Floss Corporation of America and formed an army of boy scouts to gather the floss and help win the war.

Another invention which did not sound at all military was Harry N. Peavey’s plastic carburetor. But the army eventually found it useful in teaching mechanics the principles of repairing and maintaining carburetors.

Scoutmaster Charles Learned devised a signaling mirror which he regarded as little more than a plaything, good for occupying the minds of his scouts. Then early in the war the nation was stirred by the story of Captain Eddie Rickenbacker’s ordeal while adrift for 23 days on a raft in the South Pacific. Search planes had passed overhead without sighting the party despite the desperate efforts of Rickenbacker and his companions to draw attention.

The armed forces were anxious to find some simple signaling device to attract fliers on similar search missions. A mirror seemed the obvious solution but sunlight reflected from a mirror cannot be seen unless the beam is focused’ directly on the searching plane, something difficult to accomplish with an ordinary mirror. Learned’s signaling mirror seemed to do the trick and the Inventor’s Council passed it on to the proper authorities. Learned refused to take money for his invention and it was some time before the Council convinced him that only by tying up the patent rights himself could he be sure that some greedy stranger would not be able to sting the Government.

Members of the Council, which screens all incoming ideas, are outstanding American inventors, scientists and industrial re- search ^men together with the U. S. Commissioner of Patents and representatives of all the armed forces. Chairman is Dr. Charles F. Kettering of General Motors and secretary is Lawrence Langner, one of the country’s top patent attorneys.

If you present an idea to the Council, it first attempts to determine whether it is scientifically practical and whether it has advantages over existing devices serving the same purpose. For this it often asks the aid of the Bureau of Standards, the Patent Office and other Government agencies. If your idea is believed to be sound, the Council then approaches the proper authorities in the armed forces to discover whether they feel that the new invention would be useful to them. A battery, for example, might be called to the attention of the Signal Corps, the Navy and the Air Force. Certain types of guns would be presented to the Navy while others might be shown to Army Ordnance. Once the armed forces show interest, the Inventors Council’s job is done. Arrangements for actual development and manufacture are taken care of by the armed forces and your payment will come from them.

If you want to propose an invention, here is the way to go about it: Write to the National Inventors Council, Department of Commerce, Washington 25, D. C. No special forms are needed for submitting ideas— just submit each suggestion as a separate document. Typewrite if possible and be sure to give your name and address. State the title of your invention, give a brief statement of its general nature and specific uses, explain the particular point of novelty or superiority of your invention in comparison with existing devices serving the same purpose.

Give a brief outline of any tests which have been made of the invention and include a summary of its patent status and what steps have previously been taken to develop it or bring it to the attention of the armed services or other government agencies. Give a complete description of your invention including any necessary sketches, drawings or photographs. Incomplete information may not be enough to allow the Council to judge the suggestion properly.

Do not send models unless the Council informs you that a working model is needed for testing. In one case an inventor sent the Council a package containing models of two types of bomb. The outside of the package gave no indication of its contents but fortunately there was a warning notice inside. There was considerable alarm until Maj. Gen. W. H. Tschappat, a member of the Council and former chief of Army Ordnance, personally took charge. Another inventor suggested an anti-personnel bomb loaded with itching powder made from a weed and sent samples which almost completely disrupted the workings of the staff.

The Council tries to discourage inventors from going to Washington until the armed forces actually want them there to discuss development and manufacture of their inventions. One inventor made the long trip to Washington from Oregon, only to learn that his invention could not be used by the armed services. He was stranded in Washington without money for return fare.

Because of the official nature of the National Inventors Council and the high standing of its members you can be sure you will not be cheated. However, the highly secret nature of developing inventions for war has occasionally caused misunderstandings. In one case an invention was turned down without explanation only to be used later. The reason was that another inventor had proposed it earlier and consequently had the rights to it. However, the second inventor could not be told this because of security reasons.

Exactly how much the armed services have paid inventors for ideas submitted through the National Inventors Council is not known. However, estimates place this figure in the millions.

Lawrence Langner, secretary of the Council, in speaking of the royalties inventors received from the Government, says, “It’s pretty plain that they were all well satisfied. If they hadn’t been, they could have filed suit in the Court of Claims and I can’t remember a single instance of that having been done.”

Certainly Charles A. Hedden has no com- plaints. Probably as much credit for the Allied victories in North Africa belongs to him as to any other single man. Hedden is no highly trained scientist but rather an ordinary American whose education was received in a country grade school in Florida. In 1934 Hedden, who owned a small radio repair shop, was approached by two strangers who had a map supposedly showing where Gasparilla, the famous pirate, had buried his treasure. They had searched the site near Charlotte Harbor, Fla., but their map had not been accurate enough to locate the exact spot where the treasure lay. Could Hedden figure out a gadget which would show the presence of buried metal?

Hedden could and did. He devised a delicately balanced electrical circuit which would be disrupted by the presence of metal nearby. With this contraption the treasure hunters prowled Charlotte Harbor for months. The gadget proved to be a whiz at locating buried metal. It found old anchors, discarded auto crankshafts, rusted stove lids—but no gold.

However, it later proved to be a treasure in itself. For when the war came along, Hedden offered the invention to the U. S. Government through the National Inventors Council and eventually it became the standard mine detector used by the Allied Forces. It played an essential part in clearing out Axis mine fields to open the way for Allied victory.

Hedden received $50,000 from the government for his invention. But he has also adapted it for other purposes such as screening metal out of materials like tobacco and rubber.

But the great success of Hedden’s invention has created still another problem—how to detect the non-metallic mines which other nation’s have been forced to develop when their metallic models became ineffective.

That problem has not yet been solved and it remains high on the needed list of the National Inventors Council. Solve it—or any other of the difficult military problems listed on page 60—and you’ll make yourself a fortune. And at the same time you’ll be helping your country in a time of great crisis.