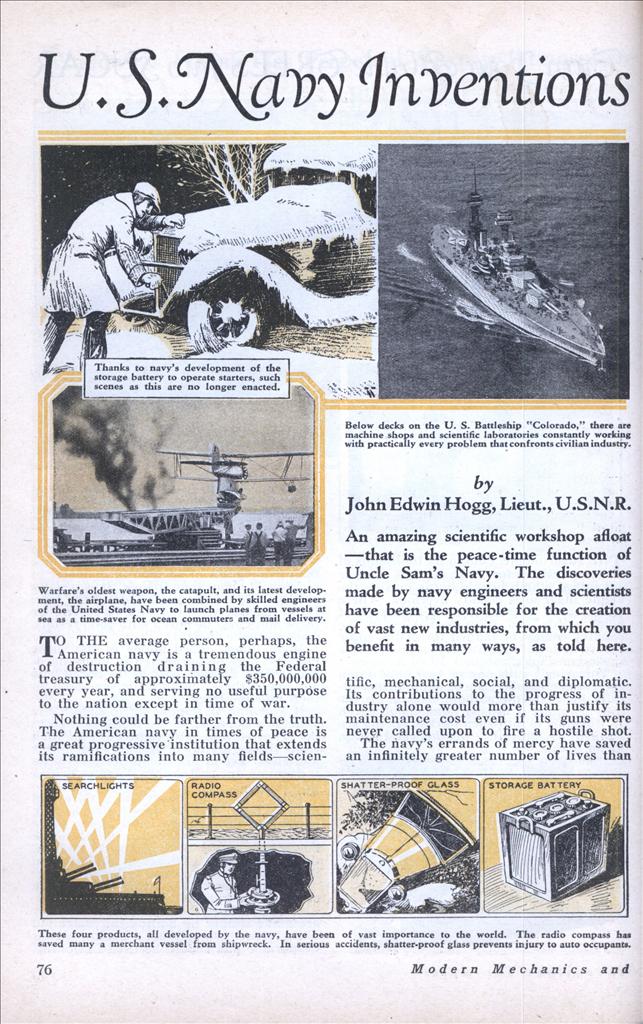 An amazing scientific workshop afloat â€”that is the peace-time function of Uncle Sam’s Navy. The discoveries made by navy engineers and scientists have been responsible for the creation of vast new industries, from which you benefit in many ways, as told here.

TO THE average person, perhaps, the American navy is a tremendous engine of destruction draining the Federal treasury of approximately $350,000,000 every year, and serving no useful purpose to the nation except in time of ‘war.

Nothing could be farther from the truth. The American navy in times of peace is a great progressive institution that extends its ramifications into many fieldsâ€”scientific, mechanical, social, and diplomatic. Its contributions to the progress of industry alone would more than justify its maintenance cost even if its guns were never called upon to fire a hostile shot. The navy’s errands of mercy have saved an infinitely greater number of lives than its guns have ever destroyed. And, without the navy’s pioneering in fields of mechanical and scientific research, American industry would have lagged far behind the growth and development it has attained today.

The American navy is probably the world’s greatest laboratory of applied science, mechanics, and invention. It is constantly experimenting, fostering mechanical developments, and stimulating research. Important scientific discoveries, inventions, and mechanical developments made originally by the navy for the solution of its own problems have found their way into industry.

Navy Products Advance Civilization These activities have often been the means of new industries being established, of established industries being greatly expanded, and of providing gainful employments for literally hundreds of thousands of American men and women.

Indeed, much of the progress of civilization in which America has gained world leadership has been the direct result of the industrially helpful naval policy originally planned by George Washington.

We live in such a highly developed industrial age that innumerable important mechanical and scientific developments affecting our everyday lives have been accepted and become commonplace. Yet, many of these things are distinctly contributions of the navy to the industrial fabric of the nation, as well as to the comfort and welfare of the individual citizen.

We go to the theatre, for instance, and are amused and entertained by seeing athletic and other performances projected upon the screen in slow motion. We are not apt to connect this form of entertainment with any activity of the navy. But such a connection does exist. It goes back to 1913 when the navy found the need for a high speed motion picture camera for recording the motion of gun projectiles in flight.

Navy First to Use Slow Motion Camera No camera capable of making such pictures then existed. So, that year engineers in the naval gun factory at Washington designed such a camera and collaborated with Thomas A. Edison to build three of them.

These cameras were motor driven. They were capable of making more than 100 exposures per second, as compared with 15 exposures per second for the fastest camera previously in use. The film actually started and stopped 6,600 times per minute. Yet, they were thoroughly successful for the purpose for which they were designed and built.

The navy used them successfully for several years, and in due time such cameras became obtainable commercially to gain the well-recognized place they now have in entertainment and educational fields.

How Cranking of Autos Was Eliminated We step into our automobiles, press a button, and the motor starts. Here we must thank the navy for the development of the storage battery that has made possible electric starters and electric lights for our motor vehicles.

People all over the country were breaking their arms cranking automobiles, and motor car manufacturers were experimenting with all sorts of spring contraptions for starting automobile engines while navy electrical engineers labored to develop a dependable storage battery as an underwater power unit for submarines. After the navy developed the storage battery the automotive industry found one of its most perplexing problems practically solved. Electric starters and electric lights soon became standard equipment on all good cars. Without such electrical equipment the automobile industry would not be what it is today.

Naval Chemists Develop Smokeless Powder Prior to 1890 black powder was one of the curses of life in the navy. So, in 1891 naval chemists began working in collaboration with the Du Pont Company in an effort to develop an ordnance powder that wouldn’t fog up the whole ocean and make navy ships look as if they’d been dug out of a mine disaster after each bit of target practice.

Nitrocellulose seemed to be the most likely substance from which smokeless powder might be developed, and after endless laboratory experimentation it was made to yield a smokeless powder that was far superior to the old saltpeter powders formerly in use.

Many Products From Powder Experiments.

Now several hundred thousand sportsmen will testify how smokeless powder has contributed to their pleasure. But smokeless powder was only the small acorn from which a figurative oak forest of industry has grown. Â» In developing such powder for the navy the various chemical solvents of nitrocellulose were discovered, and out of those discoveries have come all the pyroxalin productsâ€”pyralin, artificial leather, various floor coverings, adhesive cements, paints, varnishes, lacquers, improved motion picture film, new photographic emulsion carriers, numerous dyes, non-shatterable glass, bakelite, rayon silk (made from cotton), and all the cellophane wrappings in which so many of our food products now come to us in sanitary form.

The industries that were created out of the navy’s ‘desire for smokeless powder now rank among the. nation’s greatestâ€” contributing employment, wages, and business profits to literally hundreds of thousands of people.

In our own homes we turn on the radio and listen to a speech or entertainment program from a broadcasting station hundreds, or even thousands of miles away. We have accepted the radio, and we now find one in nearly every American home.

Yet, back of the radio in our living room is the story of how the navy is directly responsible for its development, as well as for the tremendous industry that radio represents to us today.

When Marconi discovered the principle of the so-called “wireless telegraph” the American navy was the first sea-going organization to recognize its possibilities for a new era of communication at sea. At that time not an ounce of “wireless telegraph” equipment was being manufactured in America.

Navy Responsible for Growth of Radio The first all-receiving sets were designed by naval engineers and built for the navy. Public demand and quantity production brought the prices down. The boon that radio now is to the entire nation, as well as the vast industry into which radio has developed, is largely a peacetime contribution of the navy to the American people.

If we step aboard one of the latest ocean liners for a voyage to the Pacific Coast, we will soon find ourselves cruising in a ship that is speedy, economical to operate, and virtually free from machinery vibration.

Most fast ships are plagued with vibration, but these new ships are practically vibrationless because they are the first commercial ships to take advantage of the electrical driving machinery developed by the navy for the propulsion of battleships.

Some years ago the navy found that the jolting, jouncing, vibrating, reciprocating machinery commonly used in ships had a bad effect upon the accuracy of naval gunnery, and sought to develop something better. They experimented with the electric driveâ€”steam turbines driving huge dynamos, and the dynamos supplying the power for electric motors that turn the propellers.

No phase of naval activity is so closely lined with the march of progress in industry as is naval aviation. From the time of the first flights by the Wright Brothers, 27 years ago, the navy has been actively interested in aviation.

As early as 1912 the navy established the first aerodynamical laboratory at the Washington navy yard. This laboratory also included the first wind tunnel in which so much of the coordination between theory and practice has been worked out to the untold benefit of aviation.

To the navy also goes most of the credit for the development of the seaplane, the amphibian, vastly increased efficiency in airplane design, dependable motors, and the creation of the catapult for launching airplanes from the decks of ships.

Several large steamship firms are now definitely considering the use of the catapult and airplanes as a time saver for ocean commuters and world tourists whose time is limited.

The principle of lighter-than-air flying is so fundamentally sound that men of great vision and foresight in the American navy have turned a deaf ear upon all the calamity howlers who have termed the dirigible a failure. The vast bulk of all the dirigible flying now being done in this country is being done by the navy.

The commercial possibilities of the helium-floated dirigible are beyond the imagination of the average man in the street. Yet the navy has virtually realized the success in this field it has long visualized.

The radio compass, and the system of radio compass stations that now dot our seacoasts are brain children of the navy that have saved innumerable human lives by snatching many a ship out of trouble among the reefs and shoals.

Floating dry docks, improvements in wharf and dock machinery in seaports throughout the world, improvements in ship hull design, better propelling machinery for ships, the de-salting of sea water for use aboard ships at sea, important chemical discoveries, the development of optical instruments, most of the advances made in the refrigeration of foodstuffs in ships, and important contributions to the sciences of medicine and surgery, are but a few additional things that the navy has done from which the entire nation has benefited.

The navy’s annual contributions to the progress and development of industry would justify every penny it costs us for its maintenance at its peak of international treaty efficiency, even though its guns may never again be called upon to fire a hostile shot.